Trump Impersonators Are the Real Winners of the 2016 Election 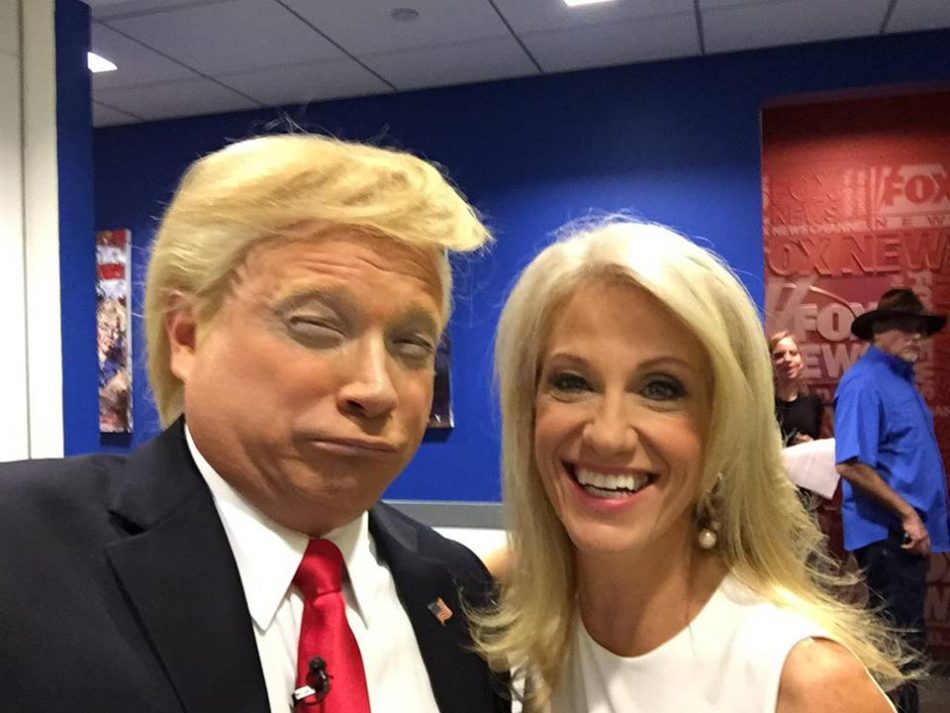 Before John Di Domenico donned the blond wig that would help him rise to worldwide recognition, he was hired to perform for the very man he’s made a career out of impersonating. For Donald Trump’s 55th birthday party at Trump’s Castle in Atlantic City, Di Domenico, dressed as Austin Powers, jumped out of a birthday cake to surprise the mogul.

Fifteen years later, winding down to election day, Di Domenico, dressed as Trump, stood behind Trump’s campaign manager Kellyanne Conway in the green room of the Fox & Friends studio. “Kellyanne, you’re doing an absolutely phenomenal job,” he said from behind her as she poured herself a cup of coffee. “You really, really are, I have to tell you.” She jumped, turning around. “I know who you are!” she said. “Can we get a selfie so Mr. Trump can see it?”

As Donald Trump has gained prominence in the past year, other impersonators have joined Di Domenico in making a good living by playing the GOP nominee. Tim Watters, a former real estate agent who became widely-known in 1992 for his Bill Clinton imitations, now finds himself performing as Trump on a daily basis. Elvis impersonator Robert James McArthur has also been transforming himself into Trump.

Di Domenico is slated to appear in Canada on Election Day. “I had multiple offers but the one we settled on is in Montreal, of all places. It’ll be my fourth booking as Trump there in the past six months,” he said, adding that “the Canadians love Trump!”

These men weren’t new to the world of impersonation when Trump first announced his run for president in 2015; the three have a combined 58 years of experience under their belts. Once the initial shock of Trump’s political debut wore off, the three rose to the challenge. Di Domenico knew right away that he’d be dusting off his blonde wig—he’s been impersonating Trump since The Apprentice was at its height. Watters and McArthur had not considered dressing as the Donald at first, but after a little persuasion from their loved ones, decided to give it a shot.

“Impersonation is a subset of general entertainment,” said Di Domenico, a former stand-up comic, who explains that the demands of the job are very specific when you’re hired to dress and act like someone else.

Di Domenico began impersonating Donald Trump in 2004 after booking a voice-over as the tycoon. He has used his characterization of Trump for corporate events, constructing team building exercises based on The Apprentice. He’s gotten a lot of press and has made appearances on Conan O’Brien and Red Eye on Fox News, as well as on local talk shows in Britain and Australia. He also recently starred in a Blackpills original web series “You Got Trumped: The First 100 Days,” about the Donald’s first 100 days in office after a hypothetical victory. Released on Oct. 19 and available for streaming on Facebook and YouTube, the show—with a tagline of “Grabbing America by the pussy”—is as raunchy as most people would imagine a Trump presidency would be.

Watters gained national attention with his characterization of Bill Clinton in 1992. After perfecting the former president’s drawl, he appeared on The Tonight Show nearly 200 times; in 1996, he says that he grossed $1 million. As Donald Trump, Watters makes anywhere between $7,500 to $20,000 a gig, depending on the nature of the event. McArthur, who has been impersonating the GOP nominee since February, is now pulling in $750 an hour for Trump appearances at parties—$250 more than he charges for an Elvis appearance.

These three men, who look nothing like Trump, can transform themselves into the mogul within an hour. They do their own makeup, ringing their eyes with white liner to achieve the “raccoon-type eye” look, as Watters called it, while caking the rest of their faces with what McArthur called the “most orange makeup MAC sells.”

The wig is the next challenge. Di Domenico has three custom-made wigs, costing about $4,000 each, while McArthur’s wig set him back $750. Arranging the wispy blond locks to mirror Trump’s comb-over is the next step. “It takes several attempts to get the hair swept over right. I don’t know how he does it,” McArthur said. “I tried using his actual hairspray, which works great, but it’s the most awful smelling hairspray I’ve ever used.” (For the record, it’s called CHI’s Helmet Head.)

For Watters, the inspiration comes from the wig. “Once I put that wig on my head, it just automatically starts,” he said. Then, Trump’s voice filters through my end of the phone. “It’s un-be-lievable,” he said, elongating the syllables.

“I’m thinking like Trump all the time now,” Watters continued. “If I want to do a smart aleck answer, I adopt the Trump attitude. I will squint my eyes and contort my lips and I will answer as Donald Trump. It’s a little crazy, but it’s so much fun—I can’t help myself.”

Through his training as an actor, Di Domenico learned the importance of liking your character, so he finds himself straddling the line that separates the deep-seated hatred for Trump from the radical adoration that has ripped through the nation. He believes that if he comes off as a political partisan, his comedy suffers and it becomes less appealing to his audience of mixed supporters. Watters says he is non-partisan—but can be for a price—and McArthur says he rarely follows politics, only tuning in for the sake of his portrayal of the nominee.

These impersonators won’t be out of a job if Trump loses on Nov. 8. For Watters, it’s a no-brainer. Bill Clinton will return to Pennsylvania Avenue, and this time, “he’ll be hanging out in the White House with absolutely no responsibility. Oh man, that is a formula for fun, fun, fun,” Watters drawled. He’s not ruling out a Trump victory, however. “I’m already lining up a lot of post-election Trump work, as a lot of business people think he’s going to win,” he said. He’s also gearing up to launch two new shows after the results are in: “Trump vs. Hillary: The Debate Continues,” and “Bill and Hillary: Déjà Vu All Over Again.” He said the latter was written in a way that, with a few minor changes, could either depict Clinton losing in 2016 and running again in four years, or Clinton winning now and running for reelection. “It’s the best of both worlds,” he said. “Either way, I win.”

McArthur, with his deep, gravelly voice, has his musical characters, like Neil Diamond and Elvis Presley, to fall back on. Di Domenico isn’t worried, either; not because he’s working on a backup plan, but because he knows Trump won’t go quietly. “Trump himself has said: ‘I whine until I win,’” he laughed. “He will keep bitching and moaning ‘til they close his casket.”

At the end of the day, the job is really about making people of all political affiliations laugh. Di Domenico recalled a time where a Muslim woman approached him before a performance, stating that she didn’t like him. After the show, he said she made a point to come back to tell him that while she still didn’t like Trump, she liked his version of him. “That’s what I try to do with my performances,” he said. “I want to entertain everybody. I don’t want the character to alienate anyone. That’s really important to me.”