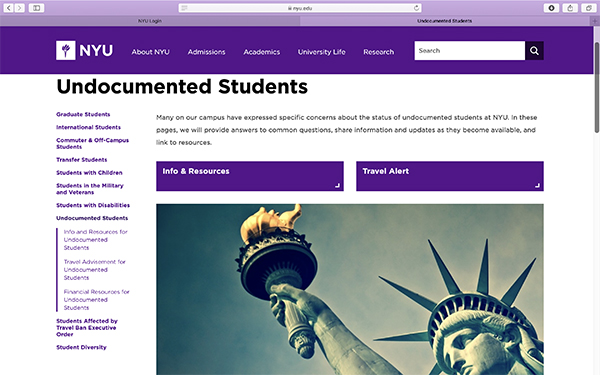 Without a pathway to citizenship and ICE arrests still rising, some undocumented students are seeking help from their schools amid their fear of deportation.

She wants the NYU immigrant community to know that these services are available.

“I just worked with the LGBTQ student center and let them know my office is here to create some partnership – so if they come across any student that is not a US citizen, they can refer them to me,” said Dàvila.

She has noticed more DACA students reaching out to her office and asking if they can travel abroad. Dàvila is also alarmed by the denial of DACA renewals.

“What I’ve seen more of is an increase in DACA renewals being denied. They’re being more of a stickler in what are the grounds for denial,” she said. “In one situation we had so much proof that the student was still eligible but US immigration services denied their request.”

Dàvila said that immigration court gives anyone that is denied an application a notice to appear, which places them in removal proceedings. This new policy forces individuals to fight their case in immigration court. She believes this puts students at risk of deportation.

“You will forever be separated from your community if you’re deported. For so many it’s like the ultimate punishment because they can never come back to their community, let alone finish their education,” she said.

Dàvila is now highly encouraging students to apply for their green cards instead of renewing their DACA applications. Although the student must ask their parents to petition for them and pay an application fee of around $1,225 – the lengthy process appears to be more reliable than  DACA renewals. DACA renewals can cost up to $500.

CUNY’s John Jay College recently opened up their own Immigrant Student Success Center in October. It’s the only CUNY college to house a center dedicated to helping DACA, TPS, and immigrant students.

“It’s one of a kind. It was created so students wouldn’t fall through the cracks,” said Cynthia Carvajal, Immigrant Student Success Manager at John Jay College. “Students are coming in and asking more questions because the center exists.”

Carvajal hasn’t seen an increase in DACA renewals being denied but she has seen more complications and errors with the applications.

“I’ve seen them asking students for a piece of information then saying they don’t need it,” she said.

Carvajal believes that immigrant students are dealing with a lot of mental trauma.

“Every student I meet with, the conversation is almost always about stress and them crying. They’re scared of ICE targeting their communities or they’re guilty that they have DACA and a sibling doesn’t and on top of that their grades,” she said.

Growing up, Carvajal was undocumented and can relate to the students she helps today. She believes President Trump has spewed anti-immigrant and anti-black body rhetoric. Although it’s painful for her to see, she wants to focus on the positive.

“But there’s still places of empowerment – that students have cultivated for themselves through groups and to me it’s rejuvenating,” she said.

Arturo Lopez Rosas, 25, was approved for DACA when it was first introduced under the Obama administration. He lived in California at the time.

“It was really exciting for me. I felt like my life had been turned around right before starting college. I remember crying and getting really excited of the possibility of a pathway,” said Rosas.

He found the application process to be straightforward and applied on his own. It took him around four weeks to get a response.

Rosas became fearful of deportation when President Trump got elected in 2016 and made the decision to leave America. He booked a one way flight to Iceland and began to travel.

“It really freaked me out that, that was something I could go through. I didn’t want the PTSD of someone throwing me out,” he said.

Rosas said that traveling allowed him to stay away from the cultural insensitivity that he believes was ignited under the Trump administration. He also didn’t want to pay $500 to renew DACA.

Rosas now lives in Mexico and decided to return to rediscover his heritage. He wishes that there was an easier pathway to citizenship and fears that he won’t be able to return to America if something happens to his parents.

“I wanted a choice to create my own reality instead of going to work one day and having ICE officials in full police outfit trying to take me away,” he said.