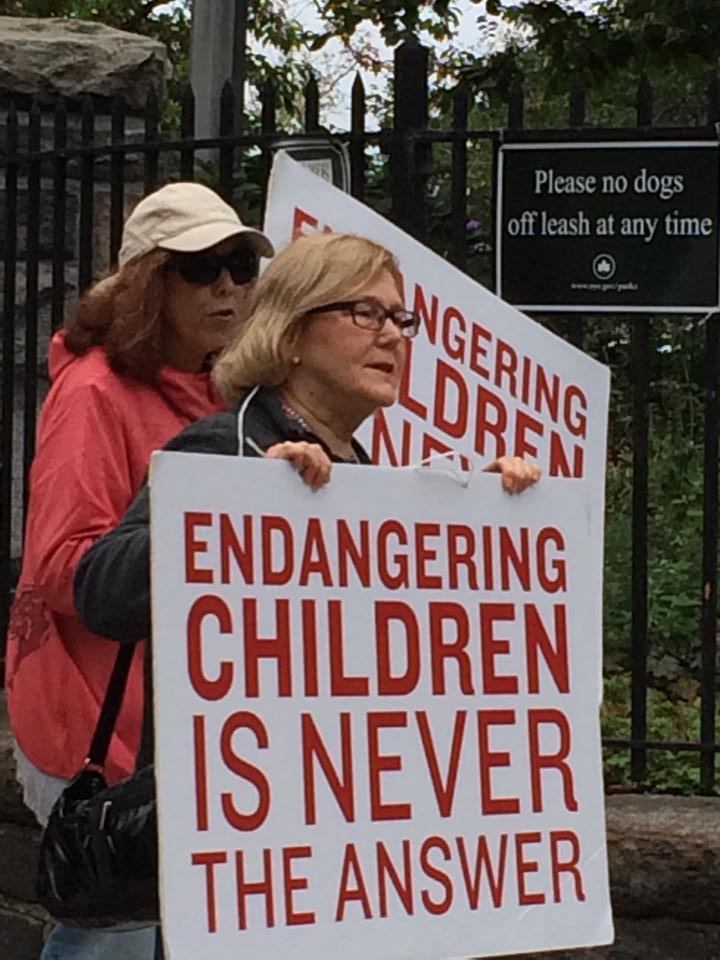 Upper East Side residents hold up signs in protest of the 91st Marine Transfer Station, the only dump being constructed in a residential neighborhood. Residents fear it will make them sick. Photo By Joanna Bouras

Students, teachers, residents, and counselors from Harlem, Yorkville, and the New York City Housing Authority, marched through drizzle on the Upper East Side yesterday afternoon. They protested and chanted about the construction of the East 91st St. Marine Transfer Station, a garbage dump they worry will destroy their neighborhood and their health.

They held signs that read, “I am not invisible #dump the dump.” Some children wore face masks to represent the facility’s risks to their lungs.

“We need to protect our community from air pollution, vermin, and danger from garbage trucks,” said Joy Tutiven, of the Upper East Side. “We already have one of the highest air pollution rates in the city.”

Residents hope that the station can be built farther away so they won’t get sick. They worry the pollution will cause asthma and other health problems.

Frank Baraff, 68, a publicist for the organization Pledge 2 Protect, the organizers of the march, doesn’t think the facility should be built at all.

“It’s an obsolete technology,” said Baraff. “We need something better for going forward, such as a better solution for recycling.

Pledge 2 Protect was originally founded to raise awareness about the dangers of the facility. They have since expanded to protect all New Yorkers from the potential health dangers of waste dumps in residential areas.

The Marine Transfer Station, which is scheduled to open in 2016, is a direct response to the 10,000 tons of trash New Yorkers make everyday. The facility is part of then Mayor Bloomberg’s Solid Waste Management Plan, which proposed cutting back on the use of trucks for transporting garbage and instead have the boroughs deal with their own waste. The facility on East 91st Street would be the only one of its kind in a residential neighborhood.

There are many schools and after school programs in the area, residents said. Parents said they are worried about their children’s safety as well as elderly residents.

“Trucks go fast someone will get hit,” said Nelma Elsayed, 34, a local resident and mother of 3-year-old.

Baraff said that people assume the Upper East Side is a bunch of “rich white people,” when in reality those who are being directly affected are mostly the minorities who live in public housing.

“We are a very diverse neighborhood,” said Barbara Heyman, 80, of the Upper East Side.

Heyman said she is worried that the station would hurt real estate values.

“Those who are renting real estate are going to leave and brownstone properties aren’t going to sell, she said. “Everyone’s taxes will go up and there will be nothing for us to do.”

But the project is already half constructed and has gone far over budget. The costs ballooned from $44 million to $215 million.

Baraff is unsure of what the outcome of the protests will be. He hopes that money, time and energy will be redirected towards recycling advances that will better benefit the state as a whole.

“If we mandate a higher standard of recycling we can reduce the amount of garbage we have, and the need for a facility like this becomes obsolete,” he said.