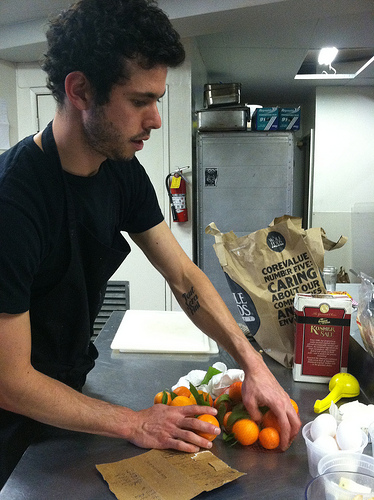 As a chef, Taymor does not lack enthusiasm, talent or dedication. What he lacks is a kitchen to cook in. Until he finds one, he and his team are operating a vagabond eatery called Alma Food and Wine, hopping from location to location, cooking out of storefront kitchens around Venice Beach, Calif., and trailing their growing clientele of foodies along with them.

The crew of three chefs and one managing partner have been looking for a suitable restaurant space to move into, slogging through a forest of red tape to obtain licenses and permits needed to open a restaurant in Los Angeles. So far, no luck.

But instead of waiting for the real estate stars to align, the team decided to fire up the grills and get started. They asked the owner of a café on Rose Street called Flake, if they could take over the space in the evenings (the café closes at 3:30) and got permission.

“We were working off of two induction burners and a little tiny camp stove,” said Taymor. “There was no oven, no heat, no gas.”

Despite roughing it, the food was good enough to get attention from the Los Angeles Times and other outlets. Accolades poured in and so did investment offers.

But finding a space of their own remained a problem. Attempts to lock in real estate were met with licensing snafus, long waits for permits, and other deal breakers. So on a recent Friday, the team took over the after-hours at the Brick House, a café with a full kitchen at the end of the posh shopping corridor on Abbot Kinney Road.

“We’re on the move,” said Dinnelle Lucchesi, the managing partner of the roaming project, as she polished silverware in preparation for their first dinner service in the new space.

“We don’t have a place for our stuff,” Lucchesi said. “We keep our things in our cars, our houses, our own fridges.”

Life was not always so up in the air for Taymor. He and his team of two chefs were running the kitchen at Saluté, a wine bar in Santa Monica. Taymor was recruited by the general manager, a friend who promised free-reign of the kitchen.

“We want to cook the food that we want to cook,” said Taymor. “So for us, we were in a place where we couldn’t do that. We felt it was better to take a risk, step out on our own, see if our food could stand up for itself.”

Alma’s food is a personal twist on modern American cooking. In coming up with weekly-changing menus, the team is driven mostly by what’s in season and what’s for sale at farmers markets. But the ideas for what to do with those ingredients come from experiences and nostalgia. 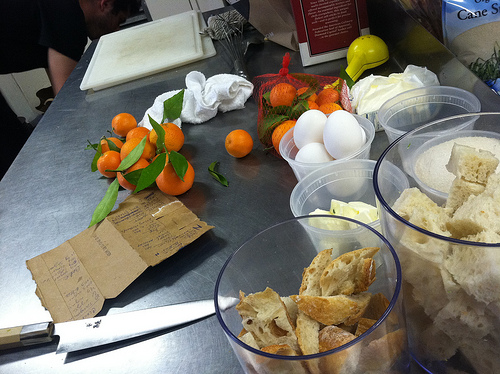 The ingredients for tangerine curd--the dessert that came with the prix fixe at Alma recently. By Edna Ishayik

“We think about stuff that we like to eat, ingredients that are coming into season, stuff that our farmers are proud of and we use them to express memories that we have of food and of places we’ve been, places we’ve worked, people who have inspired us,” said Taymor.

His childhood spent on the coast of northern California was the spark for celery root, smoked lardo, pine and apple soup. The dish was meant to invoke the Santa Cruz mountains, the scent of the ocean, pine trees and camp fires.

Moving locations every few weeks can make it more difficult to come up with new menu items every few days. But there are upshots to starting off as a roving feast The Alma crew has been able to test the restaurateur waters and see if they could secure financial backing without significant risk.

“It’s given us time to nail down our concept, get our team flowing in a really efficient way and we’re not putting ourselves out there, vulnerable for bankruptcy,” said Lucchesi.

Also among the benefits are the people enjoying the group’s offerings.

“We’re building a community around the name, and the concept, and the food,” said Lucchesi. “They are a part of us literally building our dream.”

Before dinner is served on their first night in their latest borrowed kitchen on a recent Friday, the chefs are preparing. They call out to each other in a secret language of measurements, ingredients and techniques. Bins clatter, spoons bang, knives chop, a blender whirs as the group gets accustomed to their new surroundings.

If they don’t find a permanent space soon, Taymor estimates Alma will work out of the Brick House Café for another month or so. Then the team will have to find a new kitchen to camp out in.

“We’re just these people kind of looking for a home,” said Lucchesi. “That’s what it comes down to.”