Veterans and civilians “Run as One” 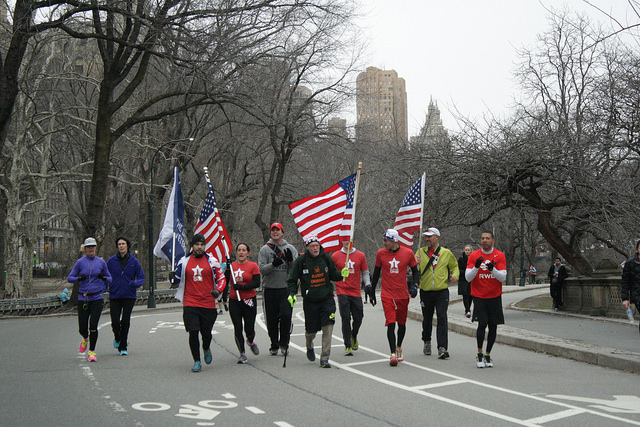 Members of Team Red, White & Blue, Team Rubicon and The Mission Continues run beside and cheer on one of the final finishers of the fourth annual “Run As One” 5k on March 28, 2015. Photo by Stacey Kilpatrick

Ten American flags waved patriotically as the gusty air blew throughout Central Park on a recent Saturday at about 11 a.m. Roughly 200 veterans and civilians, sporting patriotic colors, “Run As One” red t-shirts and running sneakers, gathered at the Grand Army Plaza in Brooklyn. They were awaiting a speech by Team Red, White & Blue New York Community Captain Joe Quinn, ahead of the “Run As One” 5k run/walk.

Team Red, White & Blue, Team Rubicon and The Mission Continues are three national veteran organizations with New York communities. They banded together for their fourth annual “Run As One” 5k, which was created in 2012 by Team Rubicon to honor one of its founding members, Clay Hunt.

The 28-year-old Texan was a former decorated Marine who served in Iraq and Afghanistan, struggled with depression and post-traumatic stress after returning home, and ultimately committed suicide in 2011.

This past February, President Obama signed The Clay Hunt Suicide Prevention for American Veterans Act, calling for evaluations of all mental health-care and suicide-prevention programs in Veteran Affairs (VA) and the Defense Department, a student loan repayment program, and a program that would remove unnecessary prescription drugs from VA patients, according to The Washington Post.

“[The run] is to remember [Clay] and for all those that are out there,” said Quinn, 35, an Army veteran of Brooklyn, running for his second time.

An analysis published by the Annals of Epidemiology in February reported findings on U.S. veteran-suicide. Nearly 1.3 million U.S. veterans who served from 2001 to 2007 were followed from the time of discharge to Dec. 31, 2009. It was found that 1,868 deaths were from suicides (351 deployed; 1,517 non-deployed). The causes of death were obtained from the National Death Index, which collects data on every U.S. death.

Often, many veterans lose their feeling of family when they leave their platoon and reintegrate back into America. While coming from various backgrounds and towns, many who ran on Saturday joined one of the veteran organizations to get that family feeling back.

“The first year or two out of the military was the hardest year of my life,” Quinn said. 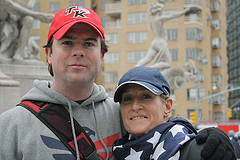 He was used to waking every morning, completing physical training and eating beef stew MRE’s (meals ready to eat) beside the same brother-and-sisterhood – a built-in social network. But when he left, that suddenly disappeared.

“That’s what you miss the most,” Quinn said.

He found himself living in Boston without family, friends or social support. His military life had disintegrated. But eventually when he returned to his hometown of New York, he joined Team Red, White & Blue and grew into a new family.

Mike Erwin, a retired veteran and friend of Quinn’s, founded Team Red, White & Blue in 2010. After participating in other service organizations and understanding the positive effects that physical activity and social engagement brought veterans, he wanted to create his own organization. Team Red, White & Blue consists of chapter and community programs that encourage veterans to stay active and local in their area, veteran athletic camps introducing sports and activities, and a leadership development program involving education, training, mentorship and leadership experiences.

“For me it’s about building genuine, authentic relationships,” Quinn said. “A lot of the time it’s not what we do, it’s who [we] do it with.”

Along with many runs, Team Red, White & Blue gathers for barbeques, yoga classes and other activities where the community comes together as one.

“I believe if vets have just simple social support, not a lot, it just takes that friend, that relationship that they can kind of get over the hump and transition successfully, and they’ll be great assets to the community.”

Aaron Scheinberg, 34, of Harlem, helped organize this year’s run as Executive Director at The Mission Continues, alongside Quinn with Team Red, White & Blue and Team Rubicon. He was running for his third time. 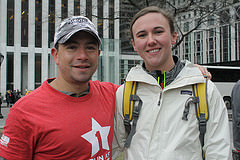 Aaron Scheinberg, 34, and Kate Connolly, 24, ran in the fourth annual “Run As One” 5k, in honor of veterans across the country. Photo by Stacey Kilpatrick

In Iraq he served as a tanker and an Army officer, and later as a civil affairs officer at Fort Hood in Texas, Fort Monroe in Virginia and Fort Knox in Kentucky. When he returned to America in 2008, reintegrating was tough.

“Your brain has been wired to be in a combat situation and you’re dealing with really high-stress situations that are life and death,” Scheinberg said. “That just takes time.”

He explained that his role overseas was essentially that of a mayor of an Iraqi town, working on civil affairs projects, spending millions of taxpayer’s money on essential services, and setting up town councils for 250,000 people.

“Then you come home and you’re looking for a job and you’re definitely underemployed as soon as you start out,” he said. “You don’t feel like all the stuff that you learned and you put into work is actually being used when you come home.”

Post-duty, Scheinberg earned his master of public administration at Harvard University and his master of business administration at Columbia University before working fulltime as a strategy consultant at a top management firm in New York. On paper, he looked like a successful transition, he said. But he was missing something deeper, a sense of purpose and a connection to something bigger that he felt in Iraq.

“The Mission Continues came along and offered me the opportunity to help veterans reintegrate and also make an impact in my community through service,” Scheinberg said. He’s been with the organization for the past three years working for the northeast region in New York.

The Mission Continues  was established in 2007 by retired Navy SEAL Eric Greitens. After he returned home from serving in Iraq, he realized while visiting wounded Marines at Bethesda Naval Hospital in Maryland that many still wanted to serve their country, even if they were no longer in the military.

The organization offers programs for veterans and others who want to serve. Its Fellowship Program is open to post 9/11 veterans who volunteer part-time for six months at the community organization of their choice. They receive a living stipend, complete a leadership development program and further develop skills. Veterans of all eras, active duty, guard, reserve and Individual Ready Reserve (IRR) can contribute on a service platoon, volunteering in their community as often as they like. Lastly, The Mission Continues also offers service missions to anyone who wants to volunteer on single or multi-day projects. 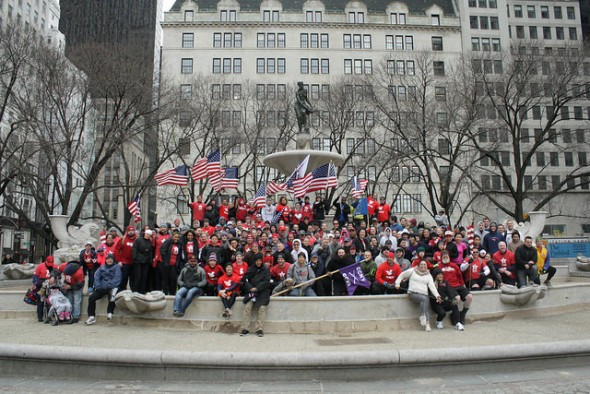 A group photo of the “Run As One” 5k participants of Team Red, White & Blue, Team Rubicon and The Mission Continues. Photo by Stacey Kilpatrick

“[All three organizations] believe that through comradery, through community and through a sense of purpose that veterans can thrive and be contributing leaders in our community back home,” Scheinberg said.

Between its Fellowship Program and its service platoon program, The Mission Continues boasts around 4,500 members nationwide.

There are currently 33 service platoons across the country, with some of the cities offering multiple platoons. New York has two, with a Brooklyn platoon in development. The Manhattan platoon works around youth education and mentorship, while the Bronx platoon revolves around neighborhood beautification and the arts.

“I saw parallels in my own life”

Awaiting the start of the run with Scheinberg was Kate Connolly. This was her third time running.

“I’m a civilian, so it’s nice to see that there are civilian supporters here,” said Connolly, 24, of Middletown, Conn. “It’s a great way to meet new people and just kind of understand that there are so many other folks out there with similar interests as you and then also you’re just a part of something bigger than yourself and I think that’s important.”

Connolly became involved with Team Red, White & Blue and Team Rubicon in 2011, shortly after suffering a severe knee injury that sidelined her Wesleyan University athletic career and put her in physical therapy.

Team Rubicon  was founded after a 7.0 magnitude earthquake struck Port-au-Prince, Haiti on Jan. 12, 2010. Two Marines, Jake Wood and William McNulty, paired with six other veterans and first responders, gathered medical supplies from friends, headed to Haiti and treated thousands in need. As part of Team Rubicon, veterans utilize their skills and military background to work with first responders and volunteers during emergency response deployments.

“I had always defined myself as an athlete and I felt like I was kind of a little bit limited in what I could do … being restricted by that knee injury,” Connolly said.

Working through therapy, she met a veteran and the two swapped stories. They understood one another’s struggles and she saw parallels in her life. Eventually gaining speed, she participated in Wounded Warrior Project’s Soldier Rides, a four-day cycling event, where she met another veteran.

Leaving Grand Army Plaza, the mob of red, white and blue crossed West 59th Street onto East Drive at 11:30 a.m. Flag-bearers stood at the front of the group. When sounded, those who elected to walk had a head start before the runners took off.

Those who walked made one lap around the lower loop of Central Park, while those who ran made two.

The tight-knit crowd that began as one complete waving American flag eventually separated along the course by skill level, but one by one crossed the imaginary finish line at Columbus Circle, welcomed by cheers and “Run As One” leaders. Some ended their “Run As One” by completing push-ups – the bravest one-armed – before Quinn jumped a few steps on the Maine Monument for a quick word.

“Good work everyone,” he said, before reminding them of the social that followed at The Perfect Pint and shaking a number of hands.

“All in all we’re working together to help provide that social support for veterans,” Quinn said. “[We’re here to] connect better into the community.”