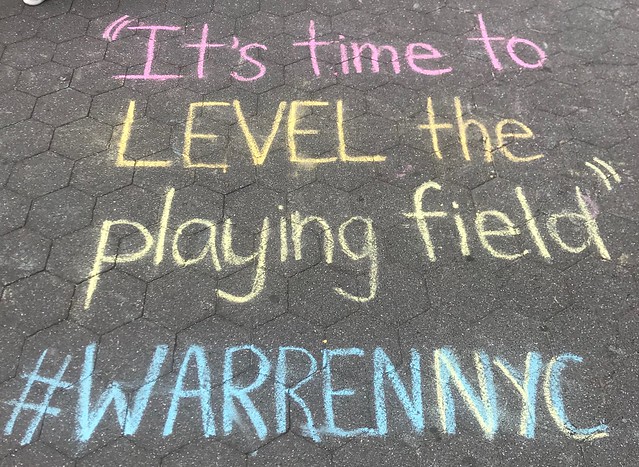 Since her introduction to the campaign trail, Senator Elizabeth Warren has made, “It’s time to level the playing field” a key slogan. Photo by Sope Aluko

Thousands of people gathered in Washington Square Park  yesterday to hear Democratic presidential candidate Elizabeth Warren speak on her fight against corruption, women’s workplace equality, environmental issues, and other progressive issues that have been fueling the rise of her campaign.

After walking onstage in one of her signature brightly colored suit jackets, the Massachusetts senator immediately launched into her anti-corruption agenda, giving the crowd a history lesson on the 1911 Triangle Shirtwaist Factory tragedy.

“I wanted to give this speech right here, not because of the arch behind me or the President that this park is named for. We are not here because of famous arches or famous men, or men at all,” said Warren, causing the crowd to erupt loudly with cheers. “We are here because of hard working women, who more than 100 years ago worked long hours in a 10 story building just a block away. These women worked at the Triangle Shirtwaist Factory.”

On March 25, 1911, 146 factory workers composed mostly of immigrant women and young girls died after a fire at the top of the building began to spread. The workers, who were on the 9th floor, were unable to escape due to a collapsed fire escape and locked doors, by bosses who were afraid workers would steal scraps of cloth.

For Senator Warren, the factory, which still stands today as an NYU building, has served as a painful reminder of the need for workplace safety reform laws, starting with cooperation from higher ups at companies.

Warren’s anti-corruption agenda, which she confidently calls the “most sweeping set of anti-corruption reforms since Watergate,” is formally known as the Anti-Corruption and Public Integrity Act, and was proposed last August. Warren pledged to work tirelessly to undo the mess  she said that the Trump administration has created.

The event brought out many young people, who were  excited to hear Warren speak..

“I think that her policies are very bold and detail oriented,” said Amith Ananthram, 27, a software engineer from Fairfax, Virginia. “She has very clear ways to fund the things she proposes, many of which I strongly agree with like the wealth taxes. She’s an older candidate which makes her more attractive because she has a track record you can judge her against.”

Naomi Muange,18,  believes that Senator Warren is making great effort to be in tune with young people.

“Obviously it may not come as naturally as it did with someone like Obama, but she is advocating for issues important to young people like healthcare and student loan debt,” she said. “At first, she got off to a rocky start, but she’s trying. It’s the effort that counts.”

But rally goer, Evelyn Keefer, 18, is worried about Warren’s pledge to fight against corruption, citing that Warren had said she would utilize corporate money during the general election.

“I don’t know if she can honestly talk about corruption in D.C. while maintaining that stance,” said Keefer.