Young people skip the state of the union 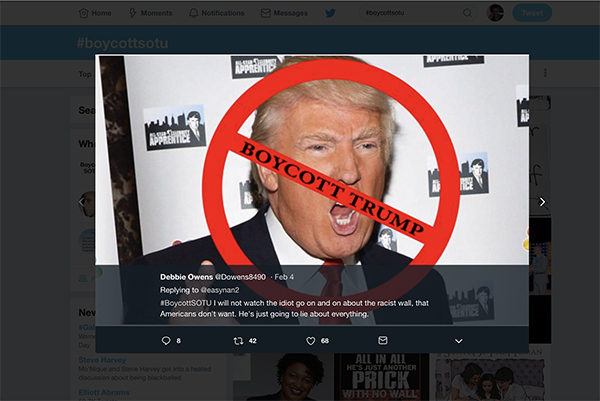 Many young people spent last Tuesday night doing anything but watching President Donald Trump’s State of the Union address. Promises of bipartisan “comity” and “compromise”  from presidential surrogates ahead of the speech fell flat for many opposed to the administration.

Despite watching every State of the Union address since 2010, including Trump’s address to the joint session last year, Hunter Gerard, a graduate student at DePaul University, opted to read instead.

“I didn’t feel like it was going to be in any way beneficial to my understanding of the state of the union,” he said. “Our government isn’t great, but it’s the one we’ve got, and I’ve always felt like I have an obligation to help shape it in a way that does the most demonstrable good for the people who need it the most. I couldn’t think of any reason that listening to Trump maligning Latinx folks, just so he could waste a few billion on steel slats, was going to help me do that.”

Twitter users pledged to skip the speech with the hashtags #BoycottTrumpsAddress, #BoycottSOTU and #TuneOutTrump. Many shared their intentions to tune out the president, but tune in for the Democratic response, given by former Georgia gubernatorial candidate, Stacey Abrams. Political action group Democracy for America tweeted a formal pledge, promising to text or email followers when the State of the Union concluded and Abrams took the floor.

“I honestly didn’t know when or if it was happening,” she said. “But if I had known it was happening, I still wouldn’t have watched it because I make it a point to not watch any of Trump’s speeches.”

While she has disregarded most of Trump’s public events, she felt confident that the State of the Union would not have offered her any information she did not already have from following the news.

“Historically, his speeches have had controversial statements. He tends to go off script and rant. He tends to always want to talk about the same things, and I personally find them incoherent,” Song said.

“It wasn’t something that I wanted to watch,” she said. “I didn’t think he would say anything I couldn’t just read [in] the highlights to the next day.”

Ryan Enright, a recent college graduate, felt the political theatre associated with it, from both parties, was not worth his time.

“It has become too mentally exhausting to keep track of the political vomit spewed from both sides of the aisle, void of any intellectual ideas or rhetorical thought,” he said. “Too many agendas being pushed and none seemingly sensical.”

At a Fair Fight Action/Stacey Abrams Address watch party in Harlem Tuesday night, viewers appeared unconcerned when technical difficulties caused them to miss the majority of the President’s speech. They instead ordered drinks and danced to the DJ’s playlist, booing when the television sound came back on, and only quieting down when Abrams appeared.

While giving an update on the speech to the assembled crowd, an organizer invoked the Twitter movement and said, “I guess we really are going to tune out Trump!”