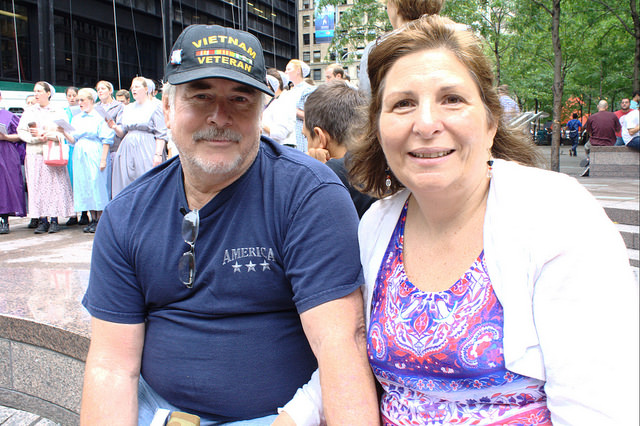 Mike Holy and Miriam Holy travel from Maryland to commemorate the lives lost on 9/11. Photo by Alexandra Zuccaro

Mike Holy and Miriam Holy travel from Maryland to commemorate the lives lost on 9/11. Photo by Alexandra Zuccaro

Outside of the 9/11 memorial this morning, Mike Holy and Miriam Holy sat quietly. Every single year since the attack that took 2,753 lives, this Maryland couple has traveled to New York City to remember and mourn. Today marked their 14th trip to ground zero.

Although the Holys did not know any of the victims, they both grew up in the area and felt deeply connected to the tragedy.

“I remember that day so vividly. I was listening to the radio when I heard that a plane crashed into the first tower. Everyone thought it was an accident, but when the second plane came in at 9:05 a.m., I knew that we were at war again,” Mike Holy said.

On top of being raised in the city, Mike Holy had the added connection of being able to sympathize as a Vietnam War Veteran. He was all too familiar with the concept of losing loved ones in the line of duty, similar to what many first responders had experienced.

“One motive for me coming here is what came after 9/11,” he said. “A problem with war is that we don’t do a very good job with bringing people back.”

The Vietnam War Veteran also recalled a meeting he had with a fireman who was there during the evacuation of the Twin Towers. After they talked and exchanged stories, the fireman gave Mike Holy a pin he had received for his service, which featured a waving American flag in the background and the head of a stoic, bald eagle in the forefront. 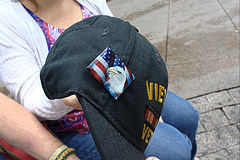 Pin given to Mike Holy by 9/11 Fireman. Photo by Alexandra Zuccaro

“I told him I can’t take this, this is yours. And then he just told me, now it’s yours,” he said as he proudly showed off the patriotic pin he was wearing on his baseball cap.

Miriam Holy was also drawn to the memorial today. In Maryland, she works as a nurse and remembered how the attack on the Pentagon made everyone so anxious. She saw how intensely everyone was affected, and how vulnerable people became.

The bond between first responders and war veterans was unmistakable. Even around the memorial grounds, men and women in uniforms of all different colors, shapes, and sizes proceeded to the entrance together.

Despite the large crowds wanting to participate in the memorial service, access was limited to family members.

But that won’t stop the Holys from returning next year.

“Growing up, coming into the city was always a treat,” said Miriam Holy. “But today’s not a treat, it’s an obligation.”