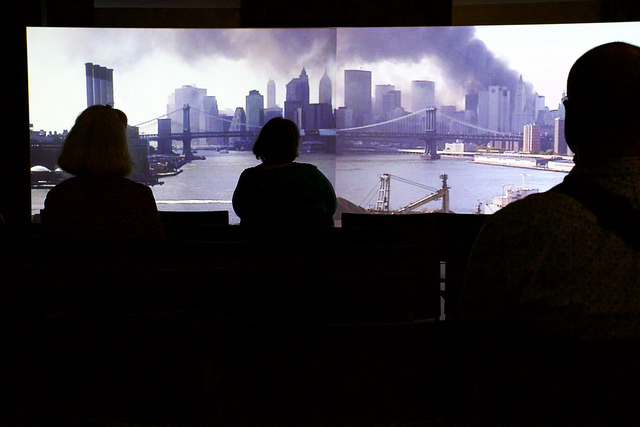 The screening of Wolfgang Staehle’s ‘2001’ was depicted on a large screen that displayed a panorama of the Manhattan skyline, engulfing viewers in the day’s events. Photo by Li Cohen

With memories flooding lower Manhattan in the form of annual ceremonies and commemorative architecture, Brooklyn residents found their own solace in remembering Sept. 11 from a new perspective.

In a somber room at the Brooklyn Historical Society, locals relived the story that shaped many of them forever. Filling nearly an entire wall was a screen playing live footage of the attacks that brought the Twin Towers down. The footage, which captured a seamless timeline of moments from the morning of 9/11 into several weeks after, was played in sync to Tuesday’s clock.

As people watched, many were overwhelmed with the memories of being within the smoke that overtook the screen in front of them. Some observed the piece for up to an hour, tearing up and sharing stories with strangers and loved ones.

One Brooklyn Heights resident, Pat Lucey, now in her 60s, recalled that she had just arrived to work on the 33rd floor of a building adjacent to the World Trade Center when the second tower was struck by a plane.

“It was a rumble like tumbleweed to where we were, and we all said there was no way we were going back up,” she explained of the view from her building’s lobby prior to her and the rest of her coworkers vacating the premises and crossing the Brooklyn Bridge. “There was black soot we all got covered in. Some people panicked and started running over the bridge.”

Despite her safe return home more than two miles away from the World Trade Center, Lucey described the scene from Brooklyn Heights as one flooded with smoke and despair as people watched what unfolded across the East River.

“Right across from the Brooklyn Bridge, people went to the promenade every day just to watch and all we saw was smoke for days,” she said. “This neighborhood was very impacted.”

That impact was spread throughout generations of long-time residents and newly welcomed New Yorkers.

Michael Barron, a Brooklyn resident who turned 31 Tuesday, was only an eighth-grader in Oklahoma at Fort Sill while Lucey was in the midst of smoke and debris.

“I didn’t know what the World Trade Center was,” he said explained of his own 9/11 experience, noting that now, after living in New York for a few months, seeing the Historical Society’s installation firsthand placed the events in a new perspective.

“I’m actually happy that it’s not just the same thing looped over,” he said of the footage not being a continuous loop of the strike against the towers. “It wasn’t just that moment. There was a 9/11 for everybody. The meaning touched everything.”

The installation, called “2001,” was created by German artist Wolfgang Staehle, who captured the time-lapse on a webcam atop his apartment building roof in Williamsburg while he was filming the skyline for a different project. His original intent was to capture the mundaneness of the city in comparison to Berlin and a countryside in Germany. The footage he caught instead turned out to be 12-second recordings that played from morning until night on Tuesday.

Visitors were encouraged to leave handwritten notes with their experiences and feelings about seeing the events happen on such a large screen. The anonymous notes were left in a basket donning words of encouragement and appreciation for Staehle and a sense of mourning for the lives that were lost. 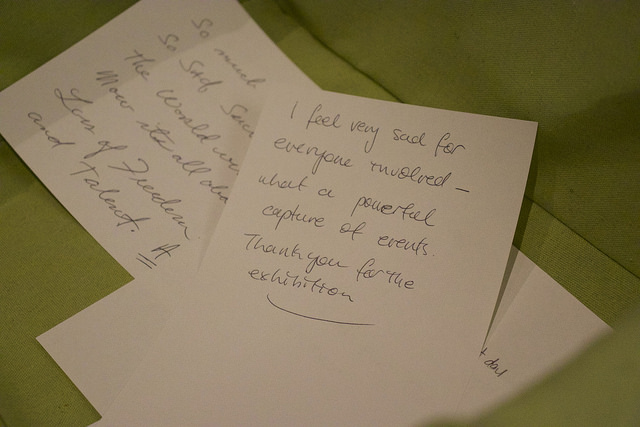 “Those who watched the live footage from 9/11 wrote their reflections about rewatching the historical moments before they left the exhibit on Tuesday. Photo by Li Cohen”

“You forget about the impact it had on different areas,” Lucey said, “whether that be Oklahoma or Brooklyn.”

Barron concurred, adding that the visuals presented did more than just show a series of events.

“I guess the important thing is that it shows that 9/11 wasn’t just planes crashing into buildings,” he said. “It was a wider event that changed so much.”