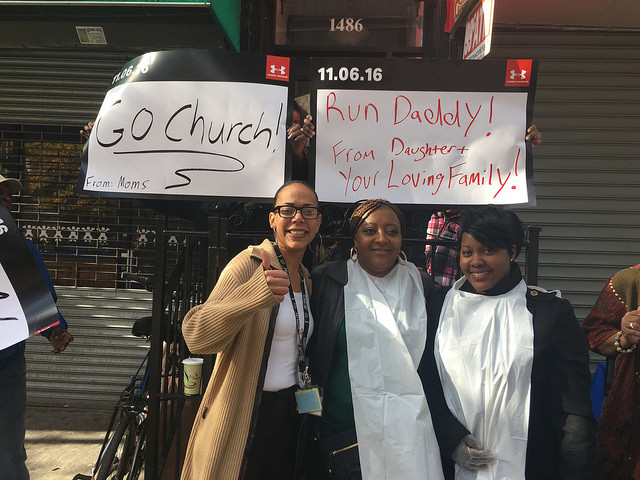 Hitting the 22-mile marker next to Marcus Garvey park in Harlem, today marathon runners were greeted with cheers of “you can do it”, signs reading “22 miles and you still look sexy”, and the smells of cooking hot dogs and hamburgers.

The members of 5th Ave. Church of God, located right along the route on 5th Avenue and 120th street, came out at 9:30 a.m. to offer free food, music, words of encouragement and prayers.

“We’re out here today because we realized that New York City has one day that it comes together, that it’s absolutely diverse and unified and that’s on this day: the marathon,” said church member Diana Branch. “So we figured we’d come out and join in with all of the diversity and beautiful love of unity and also give out free food and tell people the love of Jesus just by showing it, because sometimes people don’t want to come into church and I get it. We’re too churched out in this nation. So instead of doing all of that we wanted to come out and pray for people, give them food and bless people.”

Members of the church attend the race every year cheering runners on and offering them prayers and inspiring words, but this year they wanted to do something different.

“Last year when we came out we were just talking and cheering people on, but this year is the first year that we’ve done the food and the music,” Branch said. “We’re giving out hamburgers and hot dogs and water and we’re also sending the kids out to encourage the runners with waters and high-fives.”

First lady of the church, Juanita Daniels, wanted to make sure that the church supported and encouraged the runners and everyone at the race without compromising themselves.

“To be relevant without compromise,” said Daniels on why the church was supporting the race. “Our music is Christian music. It’s Christian rap, Christian salsa, Christian R&B and it’s a tool of Evangelism. It would draw those who normally wouldn’t come. If you watch for a little while you will see people walk by and they’re dancing and they don’t even realize its Christian music and it draws them in and then we have that chance to spread the love of Jesus with them.”

Branch also felt that it was important to support the race and runners because it was a great time to come together.

“It’s a beautiful day for diversity,” she said. “I admire this day so much because with everything that’s going on with the world this is the one place right now that nobody’s angry. It’s awesome.”