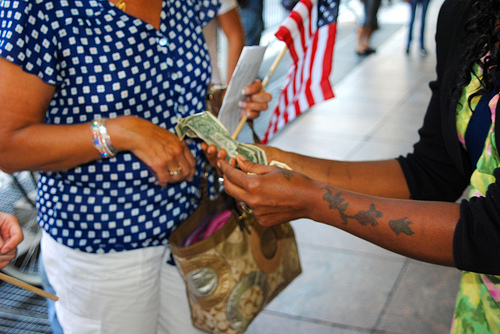 Anne Ellis makes a sale outside of One World Trade Center. By Zoe Lake

“You’re sick, you know that! It’s sick!” A passing man shouted wagging a finger at Anthony Nebors, of Brooklyn, today as he peddled commemorative 9/11 baseball hats on the 12th anniversary of the terroist attacks that killed thousands.

Posted up under some scaffolding directly across the street from the construction site of One World Trade Center, or the Freedom Tower, as it was formerly called, Nebors and vending partner Anne Ellis, also of Brooklyn, don’t understand what all the fuss is about.

“We’re getting flack for selling stuff, but we’re not the Taliban,” said Ellis, “One girl said to me, ‘I have someone who died,’ and I know about that, but why start trouble? I know they’re hurting.”

Ellis insisted that she attended the memorial for “the ceremony and the injustice,” and believes that peddling her wares, (different sized American flags), is “providing a service to the community.” 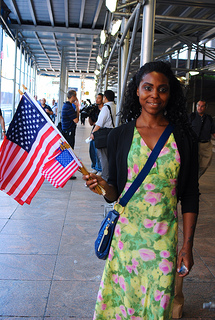 Anne Ellis and her flags for sale. Photo by Zoe Lake

Ignoring the hisses and glares of many who passed, Ellis carried out a transaction with a middle aged woman and her young daughter with whom she cut a deal for three various sized flags.

Slender and colorfully dressed, Ellis is polite and professional. She counts her cash quickly and gestures towards the women walking away who purchased the flags, “See no harm done, you want it or you don’t.”

Nearby Nebors bellowed, “hats for sale, get your commemorative hat,” while pacing up and down the crowded block. Nebors is more frank about his 9/11 memorial attendance, “I am here to sell my merchandise,” he said.

No proceeds from either merchants’ profits is put towards any victims, families, hospitals, or relief workers, and while some have told both Nebors and Ellis that they believe this is a disservice to the grieving families, in effect profiting from their pain, Nebors does not see it that way, though he admits he doesn’t know what he would feel in their shoes.

“Fortunately for me I didn’t know anyone in 9/11 so I don’t know how that would feel,” he said. “I feel that by you wearing the hats it’s respect to the families and this is the best day of the year to do that. It’s patriotic. I don’t understand why people are upset.” 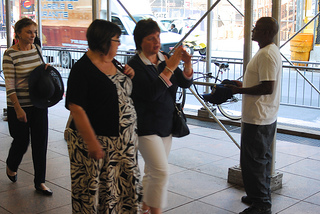 Throughout the rest of the year Nebors is a traveling vendor, setting up shop at different street fairs and markets across the city and upstate.

“One guy said I was disgusting,” Nebors said, “I didn’t steal these hats, I paid for them, I’m just trying to make a living.”

Amidst the heckling a few more sales were made. Around 10:00 AM a man dressed in a starched grey polo and khakis claiming to be a representative for families of 9/11 victims politely asked both Ellis and Nebors to leave or relocate, both nodded in agreement, packed up their things and before 10:05 AM had quietly and compliantly disappeared from the scene.