Clad in a fire captain’s uniform, retired fire captain Joe Loliscio sat in the plaza of Zuccotti Park looking at 1 World Trade Center and past the hustle and bustle of Trinity Place on Wednesday morning.

On the 12th anniversary of the 9/11 attacks, Losliscio, 57, who helped with rescue efforts that day in 2001, won’t be attending the 9/11 ceremony at Ground Zero. Since the opening of the memorial site on the 10th anniversary of 9/11, limited space has allowed only victims’ families to take part in the service, leaving out many firefighters and first responders who were at the World Trade Center that day. 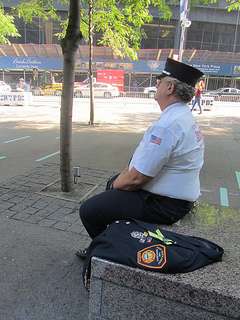 “You can’t go in unless you have credentials, or if you’re [currently] affiliated with the New York City Fire Department, or have family, or unless you’re a politician,” said Loliscio.

While other firefighters of Engine 226 located in Downtown Brooklyn, remember the day by attending local services, Loliscio comes to Lower Manhattan every year.

“You used to see a sea of blue because all the firefighters were here,” he said. “I believe I should come here, [but] coming here is becoming a waste of time because you’re shut out.”

In 2011, city officials announced that there wasn’t enough space to accommodate around the 91,000 first responders at Ground Zero. Among those, 343 firefighters died. For some firefighters, attending the memorial service isn’t about personal recognition; it’s about honoring their fallen brothers.

“I think with proper credentials, any member of the public safety agency – whether it’s us [firefighters], EMS, NYPD, Port Authority cops – should come down,” said Capt. Anthony Catalanotto, 57, of Engine 274 of Flushing, Queens. “That should be part of our thank you.” 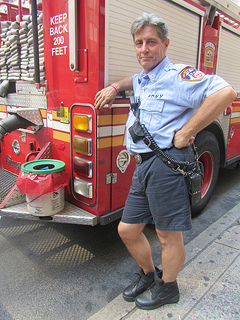 Capt. Anthony Catalanotto, 57, of engine 274, stands on Church Street in front of Ground Zero, where several hazmat trucks line the street as a safety precaution. Photo by Zahra Ahmed

This year, Catalanotto and his team lined up several hazmat trucks along Church Street in front of Ground Zero as a safety precaution. He said that no security issues were raised during previous anniversary ceremonies, but firefighters’ presence contributes to “a sense of security.”

But that presence exists only on the outskirts of an event people from around the globe come to attend. Catalanotto said that first responders shouldn’t have to pay for attendance, which would cost $25 for a walking tour of Ground Zero.

Loliscio said that firefighters don’t have much say when it comes to the issue. A fight against City Hall isn’t worth it, he said.