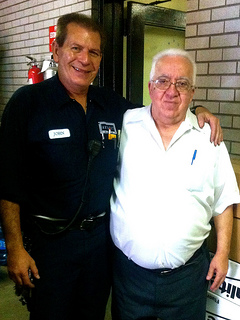 Anthony Santa Maria, 75, from Brooklyn, and John Salerno, 59, from Brooklyn were both working on the morning of September 11, 2001 at the Antitrust Reality Corporations in 33 Maiden Lane. Photo by Talia Avakian

When Vijay Kamddar, convenience store owner, returned to work in Lower Manhattan 15 days after September 11, his first reminder of the attacks was a dusty shoe left behind by a survivor.

Anthony Santa Maria, who worked directly across the street from the World Trade Center, was on the phone with his daughter as she ran passed shoes discarded by others fleeing the attack through the Battery Park tunnel.
John Salerno, who also worked near the twin towers, walked around the debris after the towers collapsed and spotted a pink shoe.

For these three local business owners working near the World Trade Center on September 11, shoes became a symbol ingrained in their experience and memory of that day.

Vijay Kamddar, 56, has been living in Queens, New York, for 33 years after moving from India. He has owned his store on Fulton Street, Lower Manhattan, for most of that time. Kamddar was working on the morning of September 11th when the first tower collapsed, but his strongest memory is an incident that took place 15 days later.

When the first tower was hit that morning, people came in and out of Kamddar’s store asking for water and dusting off as much debris as possible.

“After 30 minutes, we were told to evacuate the store, and when we came back the next day, we were not allowed to enter, and so we closed the store for 15 days,” Kamddar said.

When he returned to the store he saw a beige shoe, half covered I dust, sitting in the left hand corner of the store near the door.

“Of all the things I saw that day, that shoe, that beige shoe, was the most difficult to see 15 days later.” Kamddar kept the shoe in his store for two months.

Anthony Santa Maria, 75, of Brooklyn, was working directly across from the World Trade Center at Antitrust Reality Corporations when he got the call from his daughter the morning of September 11th.

“My daughter was in the Battery Park tunnel when the first building collapsed and she called me,” said Santa Maria.

“They were being blocked in when she heard an officer finally say ‘let them go and run for their lives’, and while she’s on the phone with me my daughter’s telling me she’s running and all she’s seeing is rows and rows of shoes, the entire floor of the Battery Park tunnel getting covered in shoes as people are taking them off to run as fast as they can,” he said.

“To this day, that scene of shoes is engrained in her mind like a movie, and I’ll never forget her describing it to me over the phone,” Santa Maria said.

Santa Maria’s co-worker, John Salerno, was also at work when the first building collapsed. Salerno, 59, remained in the building for three days afterwards because he needed to secure the building’s equipment in the midst of the debris.

“When the first tower collapsed, I rushed down to the Plaza from the 6th floor, but by the time I got there all I could see through the glass windows was pitch black,” Salerno recalled. “After the gust of smoke had cleared a bit, I took a look outside again, and I saw this pink shoe, a high heel pink shoe, you know, a ladies shoe, and that shoe got me,” Salerno said.