A Day of Unity in New York City 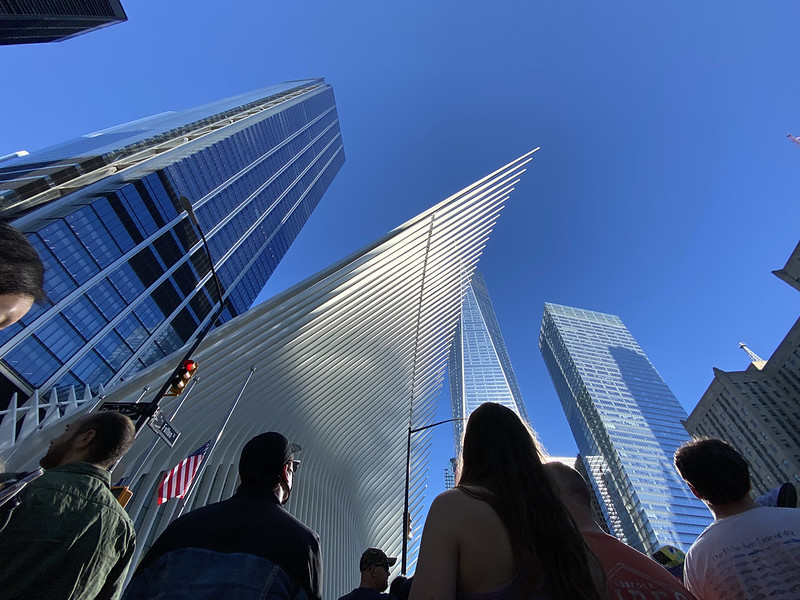 It’s been 20 years since close to 3,000 people were killed in the 9/11 attacks and this year on Ground Zero the message was unity. Police, firefighters, survivors, victims, and people from all ethnicities, ages, and countries stood together to remember, reflect; and mourn.

“The atmosphere here, it’s so unbelievably quiet for being downtown in New York City,” said Jorge Nunez, a 20 year old exchange student from Spain. “You can see the pain on people’s faces from what happened 20 years ago, but you can feel the peace and unity.” 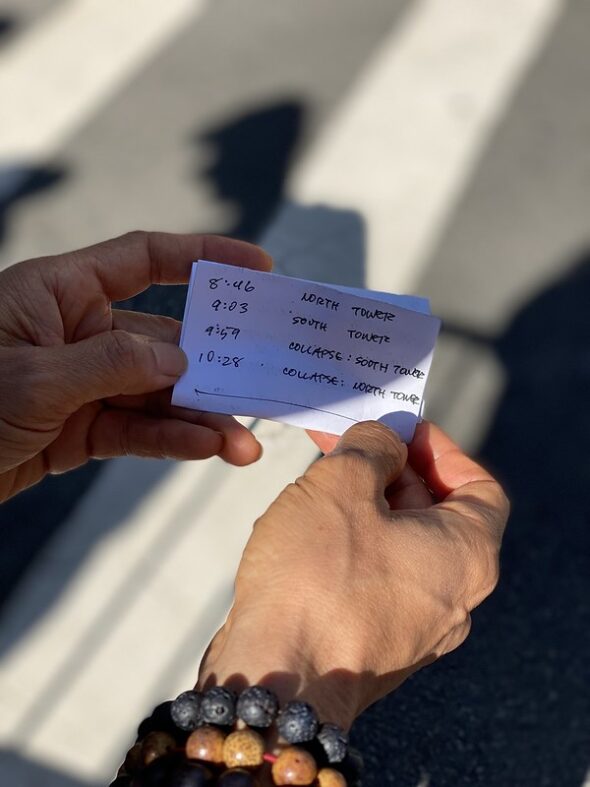 A woman holds a paper with the times of the 9/11 attacks. Hundreds of people surround her in silence, tears, and hugging at Ground Zero to commemorate the 20th anniversary of 9/11. Photo by Maggie Geiler

At 8:46 a.m. the first moment of silence began in remembrance of American Airlines Flight 11 hitting the North Tower of The World Trade Center. Although only families of the victims were allowed inside the ceremony, thousands surrounding Church Street could have been mistaken for family, hugging each other and streaming the ceremony live from their phones. One lady offered to share her phone with a group of strangers, crying while Bruce Springsteen’s “I’ll See You In My Dreams” echoed from people’s phones throughout Lower Manhattan.

“I was down here the day it happened,” said Sheila Ondracheck, 54, from Chicago. “This is the first time I’ve been back. Every year on this day I write a letter to each of my closest friends to tell them how much I love them and to live life to the absolute fullest, because you just never know how much time you have left.”

“It’s beautiful to see all the people that have come together from different backgrounds, ethnicities and cultures and are respecting each other,” stated Makenna Murphy, 18, a student in New York City. “Even though I wasn’t born yet when [9/11] happened, I feel like I have seen the repercussions of it. Between The Patriotism Act and the amping of security, it’s crazy how one event can have such an egregious impact on the world.”

While close to 3,000 people died from the attacks, according to USA Today, nearly 10,000 first responders and others in the World Trade Center have been diagnosed with cancer and more than 2,000 have died from health complications attributed to 9/11. First responders and cancer survivors were not invited to the ceremony. 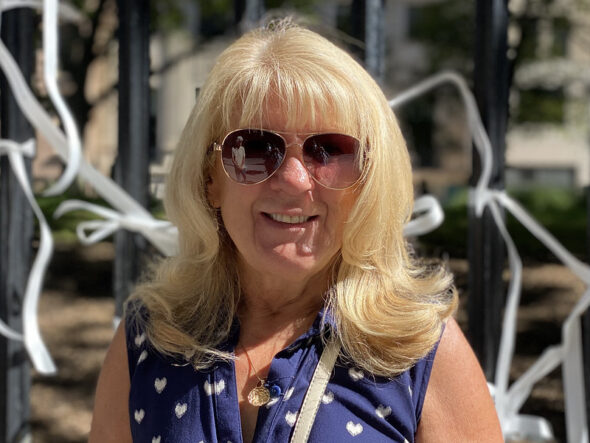 Dotti Cappola, Ground Zero first responder, returns 20 years later as a cancer survivor to advocate for those who’s health has been impacted from the attacks. “20 years ago, we came here to help people… today, I came for closure.” Photo by Maggie Geiler

“We were set up right on the pile manning the tents nonstop, this is our first time back,” said Dotti Cappola, 62, a 9/11 Disaster Medical Assistance Team first responder from Boston. “We were hoping to get in but they won’t let us in, it’s hard because there’s so many of us.”

Cappola said that not only is she a 9/11 first responder but a 9/11 cancer survivor.

“I’m a 9/11 cancer survivor. Five from our team got cancer, one of our best friends who worked our tent passed. There was debris in our mouth and eyes for weeks. I came here for closure,” said Cappola through tears.

Although Cappola said that it hasn’t been easy getting the care she needs, she said for her and friend Mike Vojak, it’s not about acknowledgement but remembrance.

“We took a lot of pictures in our own mind that we can’t get rid of,” said Vojak, 62, also a 9/11 Disaster Medical Assistance Team first responder from Boston. “I remember part of the towers were on that highway over there, they fell in a way that looked like they were hands giving up souls to God. For 20 years I haven’t been able to get that out of my mind… today it’s nice to see people remember. This is my closure.”

Both Cappola and Vojak tied ribbons of remembrance for their teammate who died on a gate across from where the Twin Towers stood.

“We just tell people we hope they don’t forget,” Cappola said. “There are so many lives affected – still so many dying from laten cancer. This country needs to come together now more than ever because this can happen again.”

The ceremony continued while names of those killed in the attacks were read into the afternoon.

“When we needed something during that time, people came together and provided,” said Cappola. “The letters, the lunches from students, the truckloads of socks for the firefighters burned feet… we stood together as a nation. It’s nice to see people standing together today.”