A different reality for the city’s minorities after 9/11 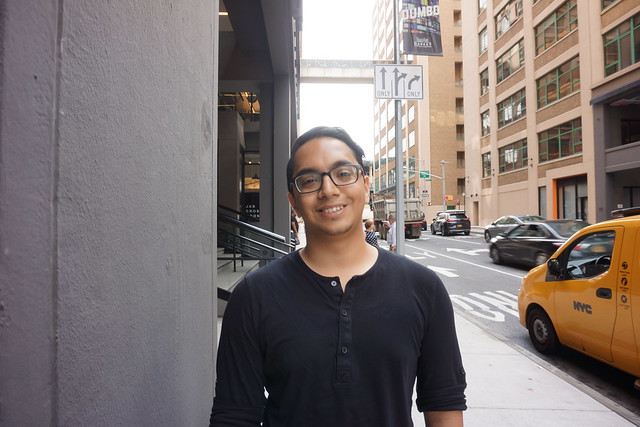 Aamer Alam is a Muslim American born and raised in Brooklyn. He was only six years old on the day of the 9/11 attack. Photo. By Bessie Liu

On the 18th anniversary of the 9/11 attacks, minorities in New York City remembered the day that changed their lives as Americans forever.

Aamer Alam, a 24-year-old Brooklyn native who grew up in a Muslim family, recalled how his father, who was a first-hand witness of the 9/11 attacks, came home as a completely different person that very night.

“He was just not the same person anymore. I guess it might be PTSD, but he never got it checked out,” he said. “He used to be quite a caring dad, but afterwards he had extremely bad anger management issues and would often lash out at us.”

Alam and his brother both faced bullying at school.

“My brother’s teacher would refer to terrorists as my brother’s people,” he said. “My brother used to be a diligent student, but after regularly being picked on by his teacher, he didn’t want to stand out anymore and his grades became quite average, the bullying really affected him.”

When he was in the sixth grade, Alam got into a fight with a classmate who called him Osama.

“It made me angry,” he said. “I didn’t want to be treated in the same way my brother was being treated. I knew it was wrong.”

His experiences were far too common. According to a report published in 2014 by the Sikh Coalition, more than 50% of Muslim children are bullied at schools, with the number rising to 67% for children who wear turbans.

Alam said Muslim women in his community, including his mother, were afraid of wearing their Hijab out in public for years after 9/11.

“We heard a lot about people forcefully taking Hijabs off women on the street, so my mum stopped wearing a Hijab to work,” he said. “She didn’t wear a hijab to job interviews just so that she could be taken more seriously. Even now, she would wear a hijab on the way to work, but not at work.”

Sandra Cabal, who has lived in New York for more than 32 years, remembered the reaction of her boyfriend at the time immediately after 9/11.

“He wanted to join the Army, ‘We have to kill the people who killed us,’ he told me. I just couldn’t believe what he was saying,” she said. “Before 9/11 there was a stigma, but that was more towards Arabic people, but because people who attacked the World Trade Center did it in the name of a religion, it has bought the believers down with them.”

“Back in Colombia, where I am from, people think you’re extremely educated if you know a second language, but here it is not the case. If you speak two languages it is almost as if people see you as a lesser person,” she said.  “I live in the Bronx. I’ve lived there for 12 years now. Before that I lived in Brooklyn for 20 years, yet so many people still ask me where I am from because I look different and speak with an accent. But I am an American; I am a New Yorker.”

“People are afraid of people who are not like them, but I like being around different people because once you actually get to know them, you realize that everyone is much like one another.”

Frank Kraemer, a 24-year-old African American man who grew up in Long Island,  said despite racism that still exists in the United States, things have improved.

“I think [racism] comes from a place of misrepresentation or misunderstanding of another person’s religion and culture. It may not be an everyday thing, but it is common and it happens,” he said. “Honestly, I think it has become a lot better over the years.”