A farm grows in Bushwick 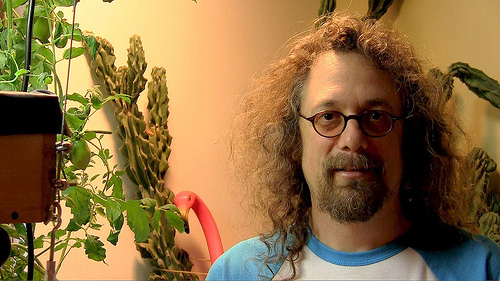 Lee Mandell is the Founder & Chief Hydroponicist of Boswyck Farms. Photo by Gabrielle A. Wright

A Farm Grows in Bushwick Audio

If it’s hard to find quality cucumbers or carrots in your neighborhood, just grow them. That’s the thinking at Bushwick-based educational non-profit, Boswyck Farms.

Boswyck Farms is a hands-on garden and woodshop where children and adults can learn how to make an everyday use of hydroponics, water-efficient drip system farming techniques. The urban basin of plants located near the DeKalb Avenue stop on the L train, houses dozens of fruits, vegetables and herbs nurtured by nutrient rich water and blue and fuchsia heat lamps. It also houses Lee Mandell, the founder and chief hydroponicist of Boswyck Farms. 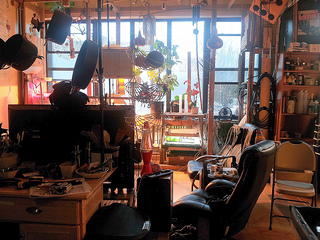 Boswyck Farms, the garden that doubles as Lee Mandell’s Loft in Bushwick, Brooklyn. Photo by Gabrielle A. Wright.

“I believe a farmer should live on their farm,” said Lee Mandell, whose loft doubles as the farm. “I have become an agricultural pioneer in the 21st century in Brooklyn which both sounds really weird and makes complete sense.”

Mandell uses his home as a 1000 square foot example of how people living in urban areas with little access to green grocers and supermarkets like Bushwick, can proactively access healthy food. It goes hand in hand with New York City initiatives to eradicate food deserts such as the Healthy Bodega and Adopt-a-Bodega programs. Boswyck Farms suggests communities take initiative by building water-efficient gardens in rooms, food co-ops and pantries.

“We’re just trying to show kids that food comes from some place other than aisle nine in a supermarket,” said Mandell. “Especially in a city where a lot of kids will grow up having never seen anything grow.” 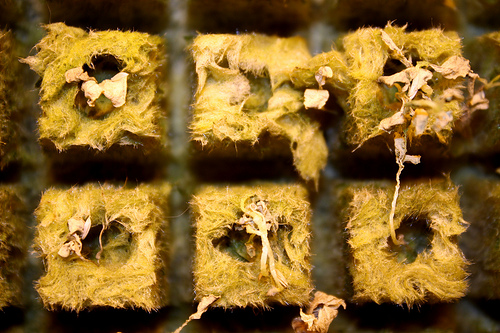 This hydroponic system is a seed tray that fills up and drains at least three times a day with nutrient rich water that goes directly to the root of the baby plant. Photo by Gabrielle A. Wright.

Now, in its 5th year, Boswyck Farm is maturing at a critical time. According to the New York City Department of City Planning about 3 million New Yorkers live in neighborhoods in high need of access to supermarkets and grocery stores. Bushwick is one of them.

The Adopt-a-Bodega Initiative  is a program that works to promote and stock corner stores with healthy foods in areas particularly affected by chronic diabetes and obesity. These areas tend to be where grocery stores are a mile or more away from residences. So far, three Bushwick bodegas have expressed interest in joining the program.

“We are talking to our local bodega here to see if we can encourage them to actually start growing some of their own food,” said Mandell. “The owner of our bodega is opening a green grocer…so this summer we’re going to be showing him what can be grown on a rooftop right here in Bushwick.”

Mandell’s hope is that wherever there’s a neon sign drawing attention to fatty foods and sugary drinks, there will also be a rooftop or food pantry nearby with all the ingredients for a salad.

“Growing food and farming is a part of the human condition,” said Mandell. “And by reconnecting with it, you reconnect with more than just the food, you build communities.”

[…] Yet, newer, younger residents point towards a different Bushwick, found in loft spaces turned into farms and auxiliary art projects near the L’s Jefferson Street stop. The train lines stretching and […]