A Fight for the New Rights of Delivery Workers: Los Deliveristas Unidos 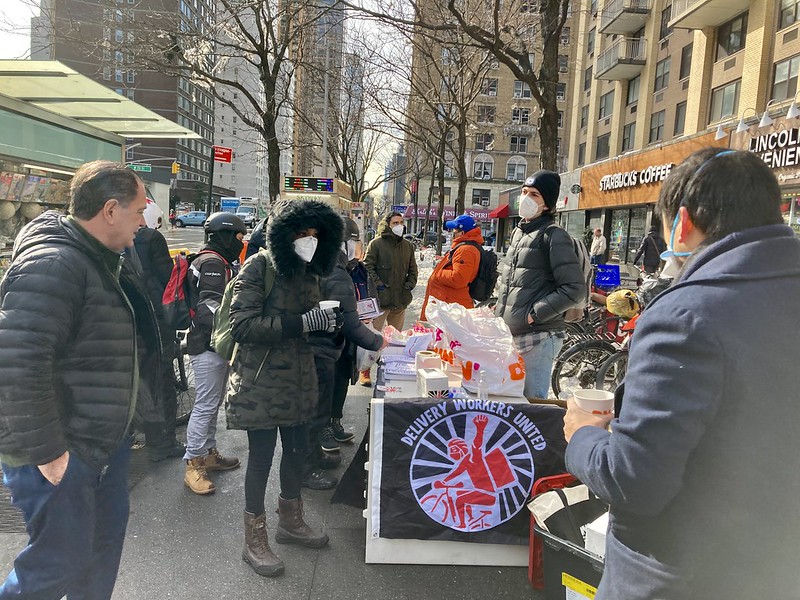 Los Deliveristas Unidos hosts a coffee break to educate delivery workers about their new rights and how to report violations. Photo by Annie Iezzi

The COVID-19 pandemic–and last weekend’s blizzard–have made ordering hot food at home an essential for many New Yorkers. Los Deliveristas Unidos, a grassroots coalition of immigrant food delivery workers, has organized to demand that their rights are considered essential, too.

“A couple of industries were the heroes of the pandemic,” said Ian Gonzalez, an organizer for Los Deliveristas Unidos. “Healthcare workers, teachers, and one group that has been the least celebrated, the delivery workers.”

Three times each week, Gonzalez and Los Deliveristas have been hosting ‘coffee breaks’ around NYC to educate delivery workers on a new slate of delivery workers rights that went into effect on January 24. Those rights include: the right to use restaurant bathrooms, a mandate for food delivery apps to tell workers their total pay and tips daily, and transparency about how much tip a worker makes per delivery.

“Rights don’t mean anything if people don’t know about them,” said Gonzalez.

here we are ready to serve New Yorkers in a snow storm please be generous because in climates like today our bikes are damaged Thank you God bless New York 🥶 #losdeliveristasunidos pic.twitter.com/wxrJjBopPf

They set up a table outside of McDonalds on 71st Street and Broadway, a popular rest area for delivery workers, 64% of whom work six or more days a week. There, they handed out steaming coffee and donuts to passersby, also giving  out informational fliers about the rights. Just one week into the rollout of protections, some restaurants are already violating delivery workers’ right to use the bathroom when picking up an order. 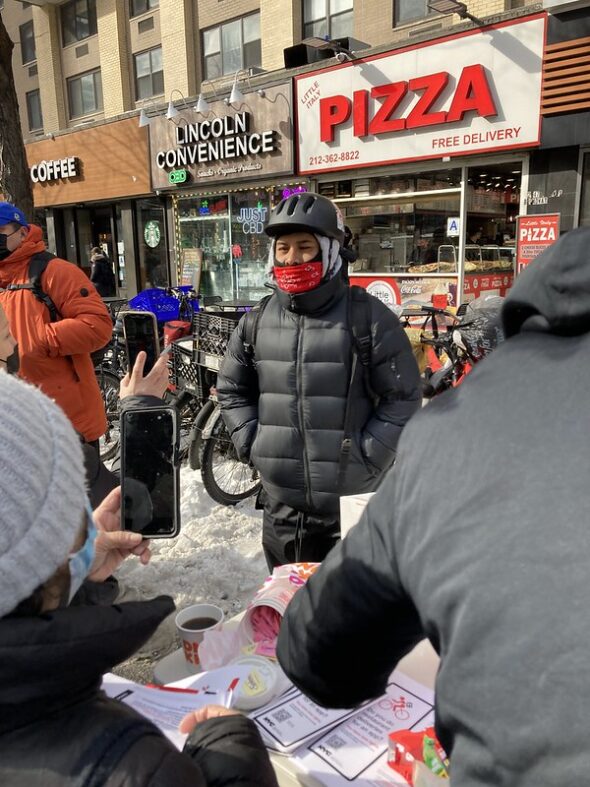 Adan Perez, a worker for Doordash, livestreams in Spanish about the delivery workers’ rights that went into effect on January 24, 2022. Photo by Annie Iezzi

“The restaurants don’t allow us to use the bathroom,” said Doordash driver Adán Peréz in Spanish, pulling out his phone to display photos of two restaurants where this happened last week.

“When I told them that now they have to give delivery workers bathroom access, they just said to me, ‘We didn’t know!’. If a person can’t use the bathroom in their place of work, what are they supposed to do?,” he asked.

This is why Los Deliveristas are hosting the coffee breaks: to let workers know what their rights are, and how to enforce them. The NYC department of Consumer and Worker Protection has posted a notice of the new rights on their website, accompanied by an email address where workers can send complaints about businesses not in compliance.

“The company [delivery apps] should be educating restaurants like we are the workers–they need to inform their partners of our rights,” said Manny Ramirez, a leader of Los Deliveristas.

He said that last year, his pregnant wife wasn’t allowed to use the bathroom in a restaurant she was delivering for. The pair deliver mostly in the Morningside Heights and Inwood areas, and while Ramirez is invested in educating his coworkers about the new bathroom law, as well as transparency about pay, he says the workers need to keep fighting.

Last year, Ramirez was in two bike accidents and was assaulted twice while delivering, despite his several years of experience working for Doordash and Relay. After one of these accidents, he said  that Doordash called him and asked what had become of the food he was to deliver. When he told them it was ruined, they charged him for it.

Hildalyn Colón Hernández, the Director of Policy and Strategic Partnerships for The Deliveristas, said that representatives from food delivery apps have been attending the coffee breaks, to help spread the word about delivery worker’s rights. And last fall, Campbell Millum, a spokesperson for Doordash, made the following statement to Bloomberg:

But many delivery workers face unintended consequences of their own.

“Everything comes from our pocket,” Ramirez said, flicking the educational flier he was holding for emphasis. “Companies only care about the food.”

Not to mention the cost of medical bills, damaged bikes, and the replacement of stolen bikes, which can be delivery workers’ only means of income. According to this Worker’s Justice Project survey, 54% of delivery worker respondents had a bike stolen, and 30% of them were also assaulted during the robbery.

“The next step is more security and safety in the streets,” said Ramirez. He suggested a law that would make it a felony to assault delivery workers, similar to one introduced in the New York State Senate to protect taxi cab drivers.

The road to even more delivery worker rights may be a bumpy one. In September of 2021, New York City became the first in the country to pass significant legislation protecting independent contractors who work in delivery. In addition to those that went into effect January 24, rights including weekly pay, route details before accepting a delivery, and eventually a minimum wage for delivery workers will roll out over the next year. This decision came after over a year of pressure from Los Deliveristas Unidos and its parent group, the Workers Justice Project.

For now, Los Deliveristas Unidos is focusing on educating all delivery workers about their new rights as a matter of safety and solidarity.

“Many guys don’t know the rules,” said Ramirez. “I need to inform them. We are our own protectors. It’s part of the job.”