A growing number of “preppers” prepare for doomsday 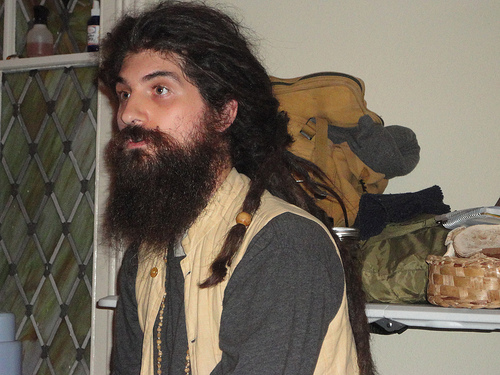 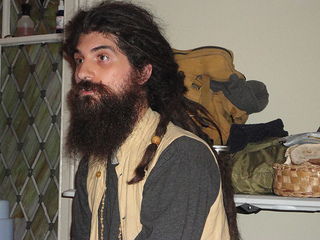 Dan Farella is an N.J. prepper who has made it his mission to learn and teach survival skills. by Alyana Alfaro

With his thigh-length dreadlocks brushing the hardwood floor, Dan Farella crouched over his tool-filled backpack at a Buddhist healing center in rural Blairstown, N.J. He was checking his “go-bag,” making sure he had everything he could need to survive living “off the grid.”

The host of an emergency preparedness workshop, Farella, 29, was making sure he had everything necessary to teach the 20 attendees the basics of foraging for food in the wild, purifying water and other “basics toward empowerment when the power goes out.”

“I have just been putting it out there and doing this as a way to connect people,” he said. “I have really found that people don’t know squat. They don’t know basic skills.”

Farella is part of a growing movement of people who want ensure their safety in the event of a disaster situation, no matter how severe. While motivations for preparedness vary, these people—who call themselves “preppers”—are looking to hone skills and stock up on supplies that will give them a higher likelihood of survival in “worst case scenario” situations. 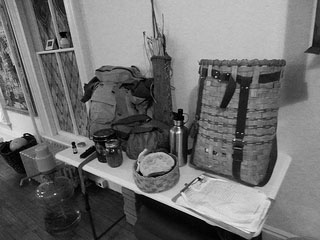 For his survival workshop, Farella displays supplies including a “go bag” a water purifying system and baskets to store foraged food. by Alyana Alfaro

For Farella, it is only through the development of skills that someone can truly be prepared for a disaster. While he said he understands the desires of others in the prepper community to store and stockpile supplies that this kind of “disaster materialism” is not a reasonable strategy for survival.

“I mean, do you really want to be the last member of humankind?,” Farella asked. “To be the progenitor once the Armageddon occurs? If you are going to prepare for that, that is a nonfeasible goal. If you have a $50 trillion bunker but you can’t make it in to that bunker by the time that nuclear bomb explodes on your head, all that stuff was a waste.”

Rebecca Loomis is a Morristown, N.J. psychologist who focuses on anxiety, stress and personal motivation for behavior. She said that the heightened desire some have to prepare can stem from a number of reasons including perception of the world, religious belief or anxiety issues.

“If someone is worried Armageddon is coming it is the way they process that that can drive them to be a survivalist or not,” she said. “If their religious belief tells them the world is ending, that is their cognitive input but if, affectively, they feel relaxed about it, that they are going to end up in heaven regardless they will probably be less driven to prepare extensively.”

While Loomis said that personal ideology is a main contributor to the desire to prepare, she also cited anxiety as a primary motivator for preparedness.

“They tend to be very anxious people,” Loomis said. “It can be as simple as that. That they see the world in terms of the worst things that could happen to them.”

Like Farella, Jeff Geis is a New Jersey prepper whose main focus is on learning skills that would help him survive in a disaster. He said, however, that his initial inclination to learn these skills came from a spiritual experience.

When Geis, 47, woke up one morning 20 years ago he knew that he was, in his words, a “light worker,” and that he needed to start preparing for a future “shift” that would change society. Now, Geis is honing his survival skills in preparation for that shift.

“I am what you would call a channel,” he said. “I am tuned into information about how the world works from outside the physical. When I was about 18 I started tuning into that something drastic was going to happen to the way we live. Everyone was talking about how 2000 was a big thing and how the world was going to come to an end but the information I was getting was that something was coming about 15 years after 2000.”

Geis said that his extra-sensory experiences—he claims he can leave his physical body and enter alternate planes of reality—inspired him to start preparing for a more primitive, sustainable way of life.

For Geis—though he says he is not a Doomsdayer who believes that the world will end on Dec. 21—it is the bleak vision he got of the future during one of those experiences that led him to strive for preparedness.

“We will go through a period where electronics won’t work very well for us and we’ve gotten to the point that if we don’t have our cellphone and our computer in front of us we don’t know what to do,” Geis said.

Because of the future he foresees where humanity has to return to living off the land, Geis said he believes survival skills are the most important part of prepping.

“There may be a point where we have to go back to where we were 500 years ago, so knowing how to forage and purify water is the most important,” he said.

Farella, who, like Geis, also said he does not believe the world will end this year, said that the rumors of some impending, cataclysmic disaster have, nevertheless, had positive effects.

“I like to call 2012, or the solstice, the Great Placebo,” he said. “It is the heightening of us recognizing that we are co-creating this shit, man. If nothing other than the Mayans trying to trick us into that, it is still making people more conscious.”

While some preppers like Geis and Farella mainly focus on honing skills that would help them in the wild, others focus primarily on ensuring they have the right supplies to help them survive in the event of a disaster in everyday life.

Colin McCarthy, 39, moved to New Jersey from the United Kingdom in September. When he worked in London two years ago, McCarthy started carrying basic survival supplies with him constantly. Now, since he commutes back and forth to Manhattan for work, McCarthy said he has become an “everyday carrier” in case he runs into an emergency situation while in New York.

“Nobody thought Manhattan would ever have issues like this, that the south of Manhattan would be flooded, that there would be large-scale terrorist attacks but they have, unfortunately, happened,” he said. “Carrying around two laminated maps which cost very little and weigh nothing just means that I have the ability to walk home.”

McCarthy said that, in addition to his maps, he also always carries a multi-purpose tool, protein bars, water, a waterproof jacket and a heat-trapping blanket, among other supplies.

For McCarthy, carrying basic survival tools every day gives him piece of mind that he will always be able to get to New Jersey and said that, to him, every day carrying seems like a matter of “common sense.”

“As a child I was a boy scout, so being prepared is their motto,” he said. For McCarthy, everyday preparedness simply means he can now consider himself an “adult boy scout.”

While McCarthy does believe that stockpiling some food and keeping items like flashlights and crank-powered radios in the home is important, he said that preppers who stockpile massive amounts of food or weapons are buying into a “sensationalized version” of what he is trying to do.

“People that think this year is the end of the world, that’s very extremist,” he said. “Yes, I am sure there are people burying containers in their back gardens and worrying about dirty bombs and acid rain but I think they are the minority. For me, this is just about making sure I can get home to my wife.” 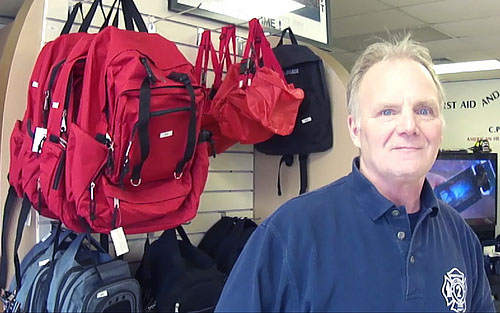 Frank DeMaio is a long-time volunteer firefighter in Whippany, N.J. Two years ago he opened Get Out Safe Family Survival Supplies to give his community somewhere they could go to buy the items he feels everyone needs if they want to prepare for a “worst case scenario.” by Alyana Alfaro

LISTEN: Frank DeMaio owner of Get Out Safe Family Survival Supplies on what you need to prepare for a disaster.
GetOutSafe