A melting pot of resistance to Iranian president 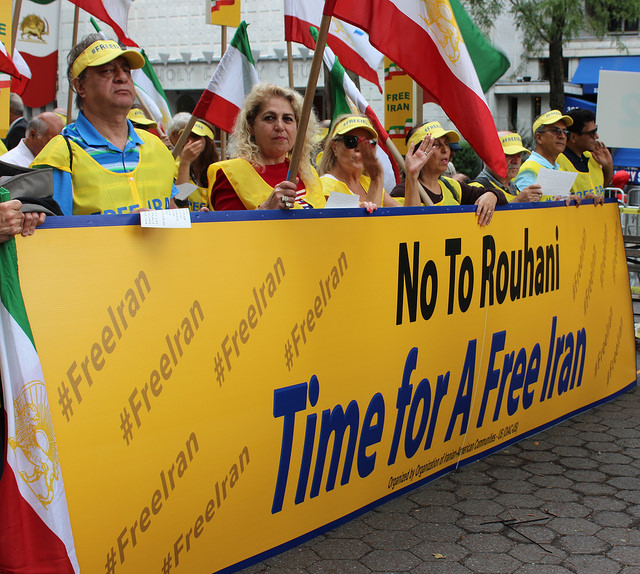 Attendees and protestors hold huge banners that read “No To Rouhani, Time for A Free Iran,” in response to the Iranian president’s visit to the U.N. General Assembly today. Photo by Farnoush Amiri

A man wearing a red cap that states “Make Syria War-Free Again,” along with a group of African Americans wearing “Incarcerated Lives Matter” T-shirts and a protester holding a sign that claims, “Qatar Is Supportive of Global Extremism” are amid the sea of fluorescent yellow visors, T-shirts and signs that read ‘Free Iran’ in front of the United Nations Plaza this morning.

As their world leaders convened a few steps away at the 2017 United Nations General Assembly, the hundreds of protesters congregated on the steps of the U.N. Plaza to protest for the sociopolitical and human rights issues that have arisen in the Middle East and domestically in the U.S.

The Organization of Iranian American Communities (OIAC) put together this demonstration as a direct response to Iranian President Hassan Rouhani’s visit to the annual convention of leaders. The mission for the OIAC is to support and suggest a third option when dealing with U.S. negotiations with Iran by building a groundwork for a “democratic, secular and non-nuclear republic” in their native country, according to the group’s mission statement.

“I am not surprised that so many people of different races and cultures come to this event each year,” said Homeira Hesami, an organizer for OIAC for the past 30 years. “Iran’s problem (with searching for democracy) isn’t just Iran’s problem, it’s a universal issue.”

Hesami, along with the hundreds of other Iranian-Americans gathered, is part of the resistance group called the People of Mujahedin of Iran led by Massoud Rajavi and his wife Maryam, who have been fighting this battle since the 1988. The group began after thousands of Iranians were persecuted and killed after the Iranian Revolution in 1978, which overthrew then-king of Iran, Reza Shah Pahlavi.

“We have had a resistance for decades against this administration and the ones before,” Hesami said. “I’m glad that President Trump is strong against this Iranian government when it comes to nuclear weapons.”

The melting pot of resistance and aggression displayed against their respective governments is a reaction to recent events and negotiations by U.N. leaders.

Nuhanad Alhasani, 50, is a Syrian-American who has been coming to this rally for the past 15 years, this time with a sign the size of his person, which starts with the line, “What is happening in Syria is not a ‘crisis’ or a ‘civil war’ or a ‘conflict between the regime and the opposition.’ It is the revolution of a people who want to live in dignity.”

“Syria’s (neighboring countries) want to recycle Bashar al-Assad’s regime, even if he kills everyone,” Alhasani said in response to the recent attacks on the Syrian people by their government, which has been largely supported by the Iranian and Russian regimes.

For 52-year-old K.C. Zang, an Iranian-American, this is rally is an annual tradition for him and his wife, who travel down to the city from New Jersey each fall.

“We come here every year, in hopes that the U.S. government can help and support us in creating a regime change in Iran,” Zang said. “Whether that help is through congress or senate, it doesn’t matter.”

The day’s events began with a drum and music performance and continued with a slew of remarks from Iranian leaders and notable members of the Tri-State community, including pastors, senators, ambassadors and scholars.

One of the members of the religious community present was Bobbie Dant from the Brown Memorial Baptist Church in Brooklyn.

“I’ve been coming to this event every year,” Dant said. “This issue of freedom from a dictatorial government is collective for us all.”