A Peaceful Resistance Amid a Sea of Strife 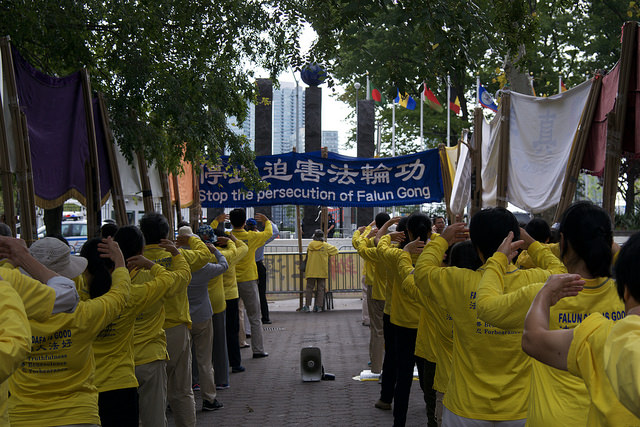 East 47th street between 2nd and 1st avenue was besieged by green, white and red flags with deafening screams of “Free Iran” permeating the air while smaller, similarly passionate groups denounced the leaders of Zimbabwe and Turkey with guitars and brightly emblazoned signs.

In stark contrast amid the colorful flags and posters of political candidates, about 50 mostly Chinese men and women in yellow t-shirts silently meditated with eyes closed and hands folded in prayer-like poses as almost inaudible Chinese music lilted from a few small speakers.

Wednesday morning, in sight of the United Nations building, practitioners of a controversial Chinese religion named Falun Gong (or sometimes, Falun Dafa) quietly protested the Chinese government’s persecution and the alleged organ harvesting of its practitioners since its criminalization in 1999.

“It’s a peaceful protest,” Victoria Bondar, a 50-year-old protester from New Jersey, said. “We worry deeply about our fellow practitioners who have been killed and (had their) organ harvested. I feel terrible, horrible.”

One of their primary obstacles has to do with labeling. The Chinese government, their most vehement opponent, labels them prominently as an “anti-society cult,” but their supporters can’t seem to decide how to categorize their organization. Unlike religion, there is no deity, and unlike most cults, their Nobel Peace prize-nominated founder, Li Hongzhi, is largely absent. They call themselves a “self-cultivation practice.”

Even the benefits of Falun Gong vary by individual, ranging from the miraculous healing of chronic diseases like cancer to simply having a clear mind. But no matter what they believe, all practitioners meditate and adhere to the group’s core tenets of truth, compassion and forbearance.

“You have to follow these three principles to be good people,” Jane Dai, a Falun Gong practitioner and former resident of Guangzhou, China said. “Even though we face this brutal persecution, we are still peacefully resisting.” 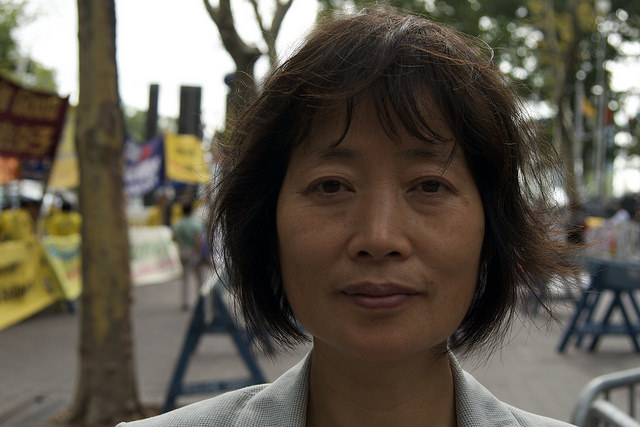 Jane Dai, a Falun Gong practitioner, was among the protestors Wednesday afternoon outside the United Nations. “They destroy our culture and now they are trying to destroy the faith of the people,” she said of the Chinese government. Photo by Justin Hicks

Chinese police arrested Dai’s husband, Cheng Yong Chen, after he delivered a letter to government officials in Shanghai defending what he believed to be the medical and social benefits of the movement. When his plane landed back in the city of Gaungzhou, police were waiting for him. Thy jailed him and took his older sister, also a Falun Gong follower, to a labor camp where she spent the next two years. Dai and her family never saw Chen again.

“In China (there are) thousands and thousands of families like us,” she said. “[They] don’t have a chance to speak out, and their voices, nobody hears.”

Ms. Hsu, a 65-year-old protestor for Falun Gong, personally experienced persecution when she was 14 years old. During the Chinese Cultural Revolution, she was barred from school and her mother from work. She did not want her full name used because of fear of retribution.

“My father was [a] captain in China,” Hsu said. “He was coming from Hong Kong back to China and lost his position, lost his money, [and the government] stopped payment to him [for] over 13 years. 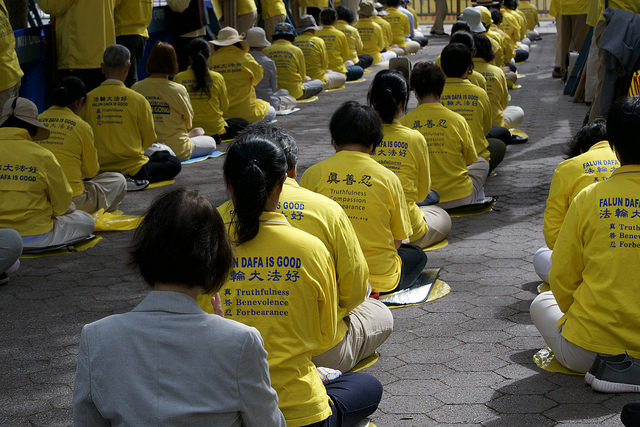 The Chinese government outlawed the practice of Falun Gong to “protect human rights and the interests of the public,” according to the Chinese Embassy’s website. The site claims that mentally ill practitioners killed over 30 people and that the organization “exercises extreme mental manipulation on followers.”

“My personal understanding is that Jiang Zemin [was] jealous,” Hsu said. “The principles [are] so different from the Communist party. They like power; they like killing.”

Despite China’s stance, other countries and human rights groups have publicly denounced the government’s actions.

The United States House of Representatives passed a resolution in June 2016 which “demands an immediate end to the 16-year persecution of the Falun Gong spiritual practice,” while simultaneously condemning the practice of transplanting the organs of “non-consenting prisoners.” The Humans Rights Watch 2017 World Report also acknowledges that Falun Gong “continues to suffer state persecution,” in its review of Chinese abuses.

With issues like North Korea and the Iran nuclear agreement looming large in the minds of most United Nations delegates this year, it seems unlikely that the Falun Gong will be discussed. But the protesters will wait patiently and peacefully.

“We just hope that people will know the truth,” Dai said. “That’s why we are here. And you can see we are very peaceful, just doing the exercises.”