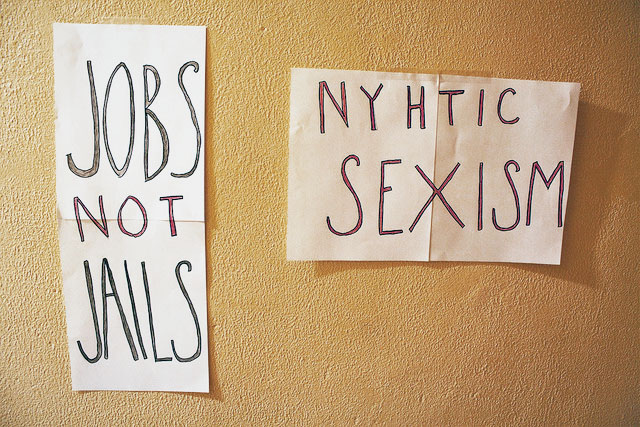 Posters used by the Red Umbrella Project at a rally outside of City Hall before the hearing on the Effectiveness of Human Trafficking Intervention Courts. Photo by Alexandra Zuccaro

Jenna Torres was only 17 when she was placed in the Human Trafficking Intervention Courts system. She was a single mother, a student, and also engaged in sex work to try to make ends meet for her family. But once the young Torres was put through the courts, it was almost too much for her to handle.

“The whole process almost ended my academic career,” she said. “I had to choose between going to court-mandated sessions, school, or being with my children. The day I was supposed to pick up my college schedule, I was charged with prostitution.”

Torres appeared in City Hall yesterday to testify at a hearing on the Effectiveness of Human Trafficking Intervention Courts to the Committee on Courts and Legal Services as well as the Committee on Women’s Issues. As a Community Organizer for the Red Umbrella Project, Torres wanted to be part of the change for other young girls that are forced to go through this system.

Human trafficking is a big problem in New York, and still largely affects areas in the Queens and the Bronx. Because of this, the city utilizes a special court system known as the Human Trafficking Intervention Courts, to help evaluate cases specifically relating to sex work and prostitution. The courts offer services such as counseling and immigration aid that are often mandated for the prosecuted victims. But many victims of these crimes complain that the systems lack in providing resources that are actually effective, such as housing and jobs.

“How can we include sex workers’ voices when assessing sex workers’ needs?” asked Councilman Carlos Menchaca during the hearing.

Members of the Red Umbrella Project joined by its sister organization, Persist Health Project, also attended the hearing. Both organizations strive to give support and resources to those involved in the sex trade. Many of their members are actually victims of human trafficking, and hoped that the meeting would urge officials to involve them in this conversation.

“Why are people in the sex trades not given meaningful opportunities to speak about their lives?” said Audacia Ray, Executive Director at the Red Umbrella Project. “What is controversial about the notion that sex workers should be centered and involved in determining the kinds of services received and the way funding is allocated?”

Another problem highlighted was the booking process that sex workers have to go through when they are bring arrested. The panel explained that being put in handcuffs, shoved in the back of a police car, and taken to the station was an incredibly humiliating system for many victims, especially for those in the transgender community who were often put in cells with other men who teased and taunted them.

“I want to echo that arrest does not equal rescue for these people. Arrest equals trauma,” said Menchaca.

With so many issues surrounding the courts and the criminal justice system, sex work victims just want to be part of the solution that helps them get the resources they need.

“People in sex trades are the experts and we must be at the table to shape services,” said Ray.