A warm winter brings relief to the homeless

Nestled underneath a canopy of Washington Square Park’s barren tree branches, “Cornbread,” 49, peered out over the checkered chessboard in front of him, beaming a gap-toothed smile at passers-by, beckoning them to take their place in front of the pawns and rooks scattered about one of the park’s many chess tables.

“Take a seat! Take a seat!” Cornbread pleaded, shifting the plastic chess clock into position next to the board. “And while you’re at it, make a three dollar donation. A man’s gotta eat.”

Unlike most of Washington Square Park’s visitors, Cornbread is one of the city’s estimated 2,648 unsheltered homeless, a hardheaded group that prefers the freedom of a park bench to cramped, rule-laden shelters and missions.

“I’d rather sleep on the streets than stay in a shelter,” said Cornbread, who said his name came from “living on nothing but cornbread for the longest.” “I don’t want to deal with the shelters. If I have to be miserable, at least it’s self imposed.”

And with snow shovels collecting cobwebs and temperatures much warmer than average, the stubborn lot are given all the more reason to brave the elements, leading to less winter traffic at local shelters like the Bowery Mission.

“We still have a pretty steady flow of 130-140 men looking for shelter, and meals, but it’s definitely not as high as usual,” said Matt Krivich, director of operations and a nine-year veteran at the Bowery Mission.

“I’m guessing with five to six inches of snow and colder temperatures, we’d see a lot more people,” he said.

Instead of choosing the Bowery Mission, Cornbread treks out of the park during the evening, first to his “stash spot” where he keeps his collection of cold weather gear hidden from the desperate hands of his unsheltered comrades, then to his sleeping spot of choice, above a heating vent just outside of the United States’ Postal Office at Seventh Avenue and Houston Street.

“This isn’t a real winter,” Cornbread said. “We’re out in the sun right now. It feels like we’re out on a beach right now.”

Under the same sunny skies, Larry Reddick, 47, held up a cutout picture of “Shameless” star William H. Macy next to his face.

“Look at this guy, now look at me,” Reddick said, pulling off his winter cap to reveal his disheveled locks. “I could be his stunt double.” 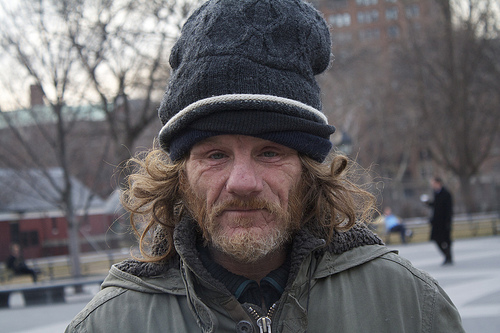 Larry Reddick, 47, spends his nights on the steps of Judson Memorial Church, where he bundles up in stacks of cold weather gear donated to him over time. Photo by Eric Zerkel

Reddick hardly comes close to occupying a television screen; instead he spends his days and nights occupying Washington Square Park’s benches, playing the part of Adam, assigning names to the parks’ resident creatures. There’s “Choco,” a stout, Hershey-hued curmudgeon of a pigeon, and “Stinky,” the aptly named odorous squirrel. But his favorite is “Rosy,” one of the park’s two massive hawks that patrol the skies, snatching up the likes Stinky for an afternoon snack.

“There used to be five black squirrels in the park,” Reddick said, clutching his hand-me-down binoculars that dangled about his neck. “But thanks to Rosy, there’s only three.”

Like a homeless cartographer, Reddick is exacting in his surveyance of the park. So much so that he can point out each of the 109 “rat-holes” that cover the small stretch of park from Washington Square West to the park’s fountain-adorned core.

But it’s this sort of exacting nature that helps Reddick survive the winter.

“I’m not gonna freeze out here,” he said. “I didn’t come to New York from San Diego unprepared.”

Part of that preparedness is bag upon bag stuffed full of donated cold weather gear.

“I got snow pants, I got jackets, I got a mummy bag in here that’s good for 25 below,” Reddick said.

Reddick was quite adamant about sleeping outside, saying he preferred his spot at the top of the steps of Judson Memorial Church, but said it didn’t hurt that this winter was particularly warm.

Unfortunately, not all of New York City’s homeless have the resources, or “spots,” of Reddick and Cornbread, nor do they share the same sentiments about the warm winter.

Larry Jackson, 56, speaks in muted tones, his hands too cracked and sore from the cold to shake hands. After losing his “dream job” as mortician in sunny Los Angeles, Jackson hitchhiked across the country, arriving in New York City on his last dollar and dying hope for work just eight months ago. 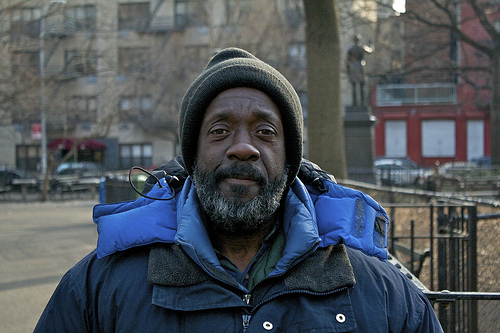 Larry Jackson, 56, spends his nights along the the East River and comes to Tompkins Square Park during the day to make and sells Cigarettes for 50 cents. Jackson has just one blanket and struggles to keep warm, even during one of the warmest New York City winters in history. Photo by Eric Zerkel

“When I came here it was nice and warm,” said Jackson. “Now, not so much.”

Unlike Reddick and Cornbread, Jackson is a newcomer to homelessness. He has just one blanket, and few friends among the vagrants of Tompkins Square Park.

He says he only opts for the Bowery Mission as a last resort, instead choosing his meager sleeping spot on a bench on the windy banks of the East River, where he says he “won’t be bothered” by those looking to take advantage of him.

While the warm winter continues to rage on, Cornbread, a 13-year veteran of the New York City streets, knows that those ill-equipped, like Jackson, face a grim future.

“This cold isn’t a joke,” Cornbread said. “I know two people who died out here. They were just sleeping out here, and they died.”

[…] Pavement Pieces speaks to Larry Jackson, a 56-year-old homeless man who sells cigarettes in Tompkins Square Park and sleeps on the banks of the East River. “After losing his ‘dream job’ as mortician in sunny Los Angeles, Jackson hitchhiked across the country, arriving in New York City on his last dollar and dying hope for work just eight months ago.” […]

Our family knows Larry Reddick from the park quite well. We live nearby and walk through each day on our way to school. He’s a lovable and fun fellow who’s got a smiling kindliness from growing up on the west coast. We wish we could do something for him but he’s badly drug addicted and for the moment seems beyond rehab. The good news is he’s off the streets and has a room at Andrews House on the Bowery.

[…] “Take a seat! Take a seat!” Cornbread pleaded, shifting the plastic chess clock into position next to the board. “And while you’re at it, make a three dollar donation. A man’s gotta eat.” Read More: A Warm Winter Brings Relief to the Homeless […]