A week into protest, “Occupy Wall Street” march on 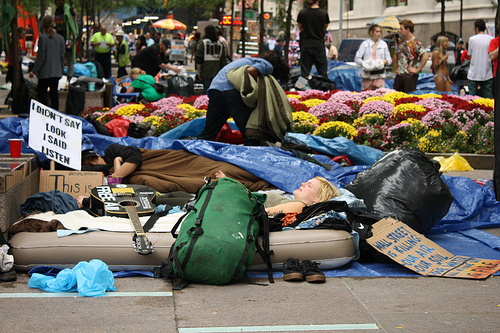 Protestors set up camp in Lower Manhattan's Zuccotti Park. The protestors have been there since last Saturday. Photo by Eric Zerkel

Some held signs proclaiming, “End the Fed,” others, “Stop Corporate Greed.” Some wore polo shirts and khaki pants, others went topless. Some slept, others pleaded to passersby to hear out their cause. But beneath the vanity of their disorganized appearance, organization took shape.

The group, known collectively as “Occupy Wall Street”, has occupied Zuccoti Park, a few blocks from Wall Street, since last Saturday. And while individuals among the group champion distinctly different causes, the group as a whole opposes what they call the rule of 1 percent, the wealthy corporate owners and politicians.

“We are amongst the 99 percent, said Joe Hill, 29, of Flushing Queens. “We represent the everyday person. We have some here who have student debt, some who can’t afford healthcare for themselves or their children. We are here to reclaim the country for the 99 percent.”

Hill works as an independent contractor in the entertainment industry during the day, but suits up as a member of the Outreach Committee within Occupy Wall St. at night. The Committee is designed to spread awareness to the public and its members line the outskirts of the park, passing out flyers and speaking to passersby. 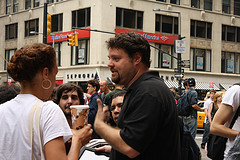 Protestor Joe Hill, talks with other other Outreach Committee members about the rules of protest. Photo by Eric Zerkel

“I have a son and parents and I’m concerned about how the one percent’s governing affects the future education of my son and the retirement of my parents,” Hill said.

Armed with a backpack full of electronics, Hill pulled out an iPad which outlined the rules of protest. Hill said the rules were derived from consensus, formed during a general assembly held within the park and among the collective group Friday, evening.

The committee echoed them to the crowd before yesterday’s march.

With the ground rules established, the group, led by the beat of drums, marched on Wall St. all the while yelling out, “Occupy Wall Street, all day, all week!”

But not all of the members marched in protest. Some individuals stayed behind to man posts at various organizations within the park.

One such group occupied a post in the center of the park, organizing and preparing food for their fellow protestors. The public donated all the food, from bananas and apples to peanut butter and jelly sandwiches and pizza.

“There is no hierarchy here,” said Dmitry Sheynim, 25, of Fair Lawn, NJ. “I came here because I believe people can live without propaganda, but they can’t live without food.”

Even without a structured hierarchy, the food center workers figured out how to organize where help was needed. One food worker said that organization wasn’t needed because people gravitated towards jobs that fit their strengths. 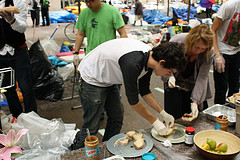 “We’re running an experiment here,” said Jason Coniglione, 24, of Scarsdale, NY., who helped craft posters at the communication station. “Literally we’ll take anyone off the street who wants to participate in our system. We’re incredibly diverse, but if we can stay organized despite the police presence, and despite public perception, it shows that if you encourage people to participate we’ll live in a much better world.”

“This has only been going on a week, but look how far we’ve come,” Coniglione said. “I can’t wait to see what we accomplish in a month, a year, and as time goes on.” 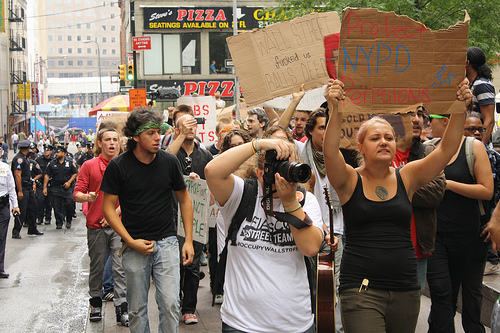