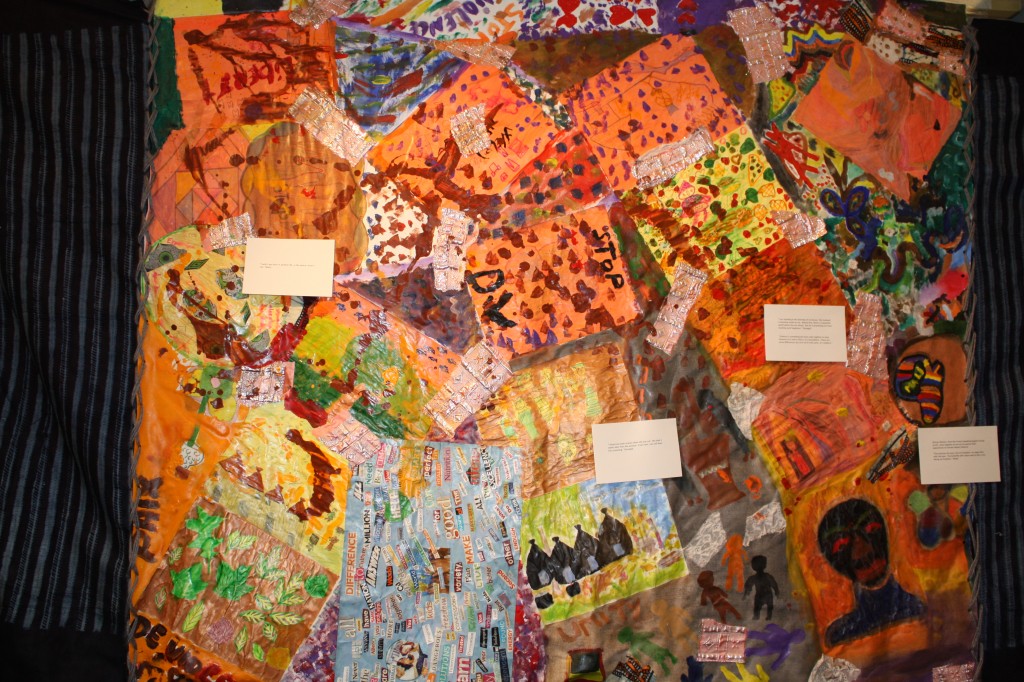 Collage by West African women who are victims of female genital mutilation. Photo by Elisa Lagos

A woman relived the terror of witnessing her sister being circumcised against her will in their West African home. The experience still haunts her.

“I heard my sister scream when she was cut. She died two weeks later from the excision. Even now I can still hear her screaming,” the woman wrote.

Genital mutilation, also called female circumcision or cutting, is a brutal procedure that involves cutting the female reproductive organs — a procedure practiced mainly in African, Middle Eastern and Asian countries. The woman, who now lives in New York, is also a victim of this abuse.

Her words were a part of a unique, animated art display created by West African victims of female genital mutilation. The mural hung in the gallery of an obscure building in Lower Manhattan in the shadows of Wall Street and the historic Trinity Church.

The painting was actually a collage created by 8 women, who used the vibrant colors and figures to express their violent pasts and promising futures. From a distance, the red, purple and bright-orange work of art looked like a vivid image of life, but within the bright colors were words of pain, remembrance and hope.

In the collage, one woman described a haunting memory of her husband, a man with “an angry face with angry eyes. The butterfly with colors next to him is me taking my freedom,” she wrote.

Next to the mural stood a display of photographs depicting a woman’s hands and plants growing in the sunlight, while across the room was a painting of figures seemingly dancing to a drummer’s beat.

A painting by a victim of domestic violence. Photo by Elisa Lagos

The pieces were created by immigrant women who experienced domestic violence, from rape to beatings to genital mutilations. It is part of an ongoing arts program run by Sanctuary for Families, a non-profit group that helps victims of domestic abuse.

The exhibit, “From Oppression to Expression: Immigrant Experiences of Violence,” showcases some of the works by women who used art to communicate what they could not say in words. It was planned to coincide with Immigrant Week in New York, which was April 15-22, though the mural has since been removed.

“I think part of our holistic vision is to mobilize as many of the creative arts as possible. That whole model is being replicated in other places,” said Beth Silverman, clinical director at Sanctuary for Families. “I think whether it’s writing, journaling, drawing, we try to mobilize all of the senses in the creative process.”

Art therapy was first used in the 1940s to help traumatized soldiers returning from World War II. It has since been used to help people who lived through different traumatic experiences, such as domestic violence, to help maintain mental health and restore a sense of well being.

“It is easier for them to express themselves through drawing. When they draw, they draw what they’re thinking. It’s very healing,” said Sanctuary for Families employee Mariama, who declined to give her last name. “By drawing, it makes it easier and safer because when you express yourself you don’t have to put your name on. It’s anonymous.”

Like most abuse victims, immigrant women often feel trapped in abusive relationships, but — for immigrants — it is far more difficult for them to escape their abusers. Immigrant women tend to have less knowledge of U.S. laws, poor financial resources and a limited understanding of English, while abusers frequently use a woman’s legal status as a mechanism to retain control and keep her from going to authorities.

Despite laws that protect victims of crime regardless of legal status, many immigrant women do not know the law applies to them. The result is a growing number of women who stay in abusive relationships, sometimes with fatal consequences.

A 2005 survey in New York City found that 51 percent of homicide victims killed by their partners were immigrants.

Organizations, such as Sanctuary for Families, try to reach as many victims of domestic violence as they can around the city.

“We do a lot of out reach in the community,” Mariama said. “We are in hospitals; we are in court, family court or schools.”

Sanctuary for Families, in conjunction with New York City’s Office to Combat Domestic Violence, has opened a new Family Justice Center in the Bronx. There are also centers in Queens, Brooklyn and Manhattan.

Wow this is a great resource.. I’m enjoying it.. good article

I have been to your site several times now, and this time I am adding it to my bookmarks 🙂 Your posts are always relevant, unlike the same-old stuff on other sites (which are coming off my bookmarks!) Keep it up!

Great information! I’ve been looking for something like this for a while now. Thanks!