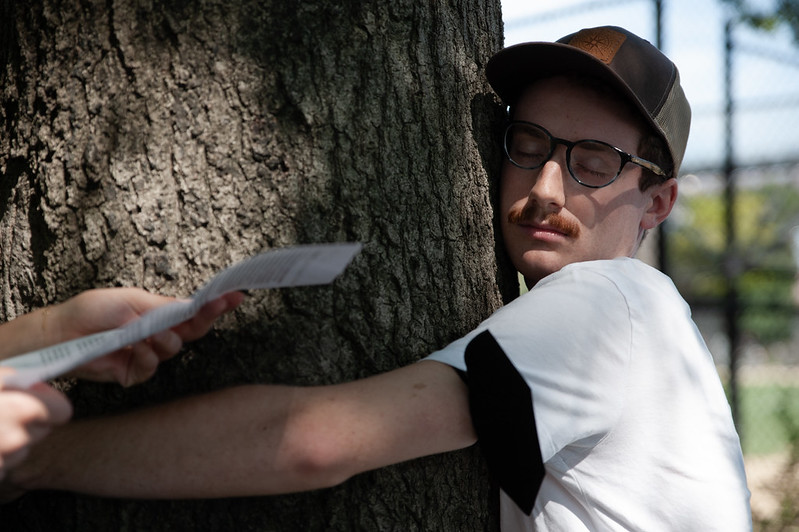 After the first few speeches in the East River Park, a protester embraces a tree. September 11, 2021. Photo by Nikol Mudrová.

Lower Manhattan residents gathered in the East River Park’s on Saturday to protest their disapproval with the city’s plan to destroy the park  so flood controls could be built there instead.

The protest was peaceful, but about a hundred residents are fed up and ready to chain themselves to the trees to save the park.

“Next week, it’s gonna be disobedience,”  Eileen Myles, a poet, writer, and East River Park Action activist shouted into a megaphone. “We have to go to the next level. Media don’t pay any attention to us,”

The first of the 1,000 trees are scheduled to be cut down on Monday which will destroy the downtown sanctuary feeling of the park, protestors said.

“When the trees we need are under attack, what do we do?”  Myles shouted, addressing the plan to cut down the trees. “Stand up, fight back!”

Protestors responded by  shouting,“Bury the plan, not the park!” 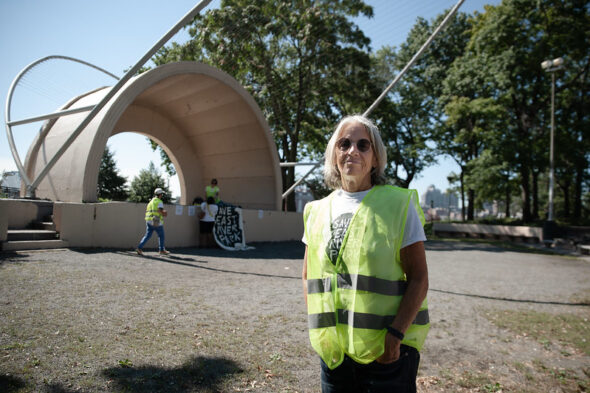 Eileen Myles, American poet, writer, art journalist and one of the leaders of the East River Park Action, at the park’s Amphitheather before the protest started. September 11, 2021. Photo by Nikol Mudrová

It wasn’t only shouting that could be heard in the  park  yesterday morning, participants also sang “These are the trees, we need to breathe” while sitting at the promenade along the river.

Because of the East Side Coastal Resiliency Project (ESCR) plan, the current park has to be practically destroyed and rebuilt all over again. Originally, the city wanted to put a flood protection between the main road and park while containing the park basically as it now, but the Committee on Environmental Protection and Committee on Parks & Recreation Oversight decided to drop that idea.

On January 23, 2019, both committees changed the approach to ESCR’s plan which they believe would transform the East River Park “faster and smarter,” as Commissioner Mitchel J. Silver explained before the New York City Council.

The plan would  build a 1.2 protection wall along the water and therefore elevate the whole park by eight feet of fill. According to the plan, newly planted trees would be different and more resistant species than the present ones. 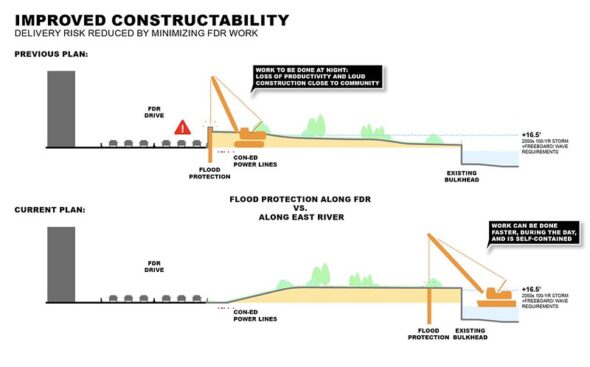 He said that the plan should be finished before the end of 2023, a year faster than in the old plan.  But the protesters think  the rebuild will last longer.

“Those projects often delay anyway,” Daniel Efram, the activist running the NY Indisible initiative, who came to the protest.

The new plan promises better resiliency against flooding and around 2,000 new trees since many of the current ones show a decline in their health, Megan Moriarty, NYC Parks Press Officer said.

“The thing is, the park is resilient even on its own. Moriarty said, “It flooded, and then the water went back to the river. It’s like a sponge.”

But Myles disagreed and claimed they still don’t understand why the city changed its policy.

The lack of transparency is, in fact, one of the main reasons people joined the protest. They understand that the solution for the flooding problem is needed, even more after the two recent hurricanes.

“When the city is hiding, lacks transparency, and does not involve community or even independent oversight, then it’s asking for a fight. So it got a fight,” Efram said.

Moritarty from NYC Parks said that the department meets with the ESCR Community Advisory Group monthly.

But Myles said  it isn’t enough.

“ (Mayor)De Blasio is not hearing, he is just repeating his own talk,” she said. 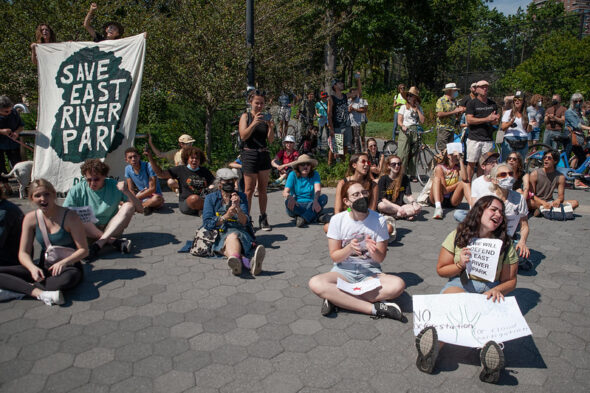 “Don’t tear it down, it’s the only park around.” Protesters shout while sitting on the ground of the East River Park promenade. September 11, 2021. Photo by Nikol Mudrová

Despite the start of construction  Efram remains hopeful. He pointed out that now, people can really see the urgency considering they can’t run on the path anymore because of the construction.

Neighbor Paul Whity just realized he lost his park. He said  there won’t be any other place to go for a run, play tennis, football, or just spend time outside.

“It is the only outdoor space we have, Tomkinson Square Park is always crowded,” he said.

The NYC Parks Dept. has offered up e local St. Vartan Park, Robert Moses Playground and St. Peter’s Field as replacements, but their smaller and farther away.

Activists chain themselves to the tree to save East River Park - Pavement Pieces says:
September 29, 2021 at 2:41 pm

[…] originally, the city wanted to put flood protection between the main road and park while containing the park basically as it is […]