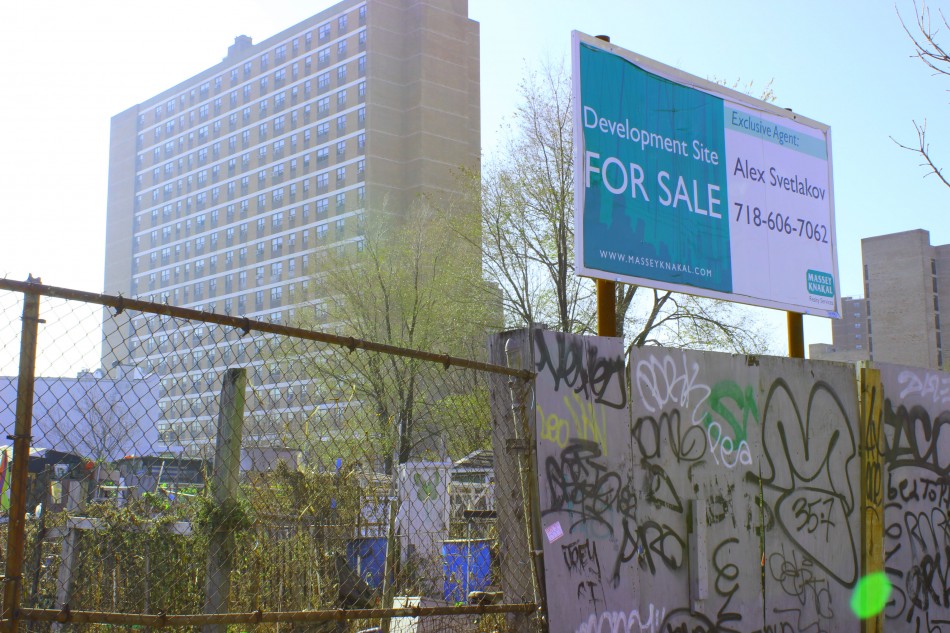 A Greenthumb garden for sale, down the street from the former site of the Boardwalk community garden. Greenthumb is a city program which grants resources to community members, enabling them to convert vacant lots into gardens.

At 5 a.m. on December 28th, 2013, Yuri Opendik, 36, woke to a frantic call from a fellow gardener. The New York City Council sold the Coney Island’s Boardwalk Community Garden nine days earlier. The land where Opendik had, for seven years, grown food for his family was cleared in the middle of the night. Land, stewarded by neighbors, was scraped to make way for a 5,000-seat, $53 million amphitheater built by iStar Financial.

“It was heart breaking,” said Opendik, describing the scene. “There was a police car there preventing us from coming even close to the entrance to the garden, so they had excavators . . . bulldozers, and they were just going at it. It was still dark, they had projector lights, and they were just destroying.”

On December 14th, after two years of delays, the gardeners met with the City, and iStar, in court, to regain their garden, or at least replace it. Now, the judge is reviewing the arguments and evidence, before announcing whether the case goes to jury trial.

“With the mounting of the lawsuit, folks had a sense that people are fighting with us and for us,” said Ray Figueroa, president of the New York City Community Gardening Coalition. “It was a blow to be bulldozed, and then it was a blow not to hear your grievances in a timely fashion.”

The decision to develop the land was driven by City of New York changing the neighborhood.

In 2009, the City rezoned Coney Island’s former amusement area, for redevelopment, and the garden fell within that area, according to the municipal website.

At 13% unemployment, Coney Island is 4% over Brooklyn’s average. Its 2013 murder rate on par with Brownsville, a New York neighborhood famous for its violence. Residents have an average income of $31,000.

“We hope the Amphitheater is a catalyst for a neighborhood resurgence,” said Julia Butler, vice president at iStar Financial, in a statement. “Neighborhood programming from movie nights and poetry slams to high school graduations and community theater performances are all envisioned for the Amphitheater.”

The gardeners have priorities removed from the City’s.

“A lot of our gardeners really depended on the garden for food,” said Carolyn McCrory, a gardener at the Boardwalk Garden. “The most important part of all of this journey is for our gardeners to regroup and find an additional parcel of land.” 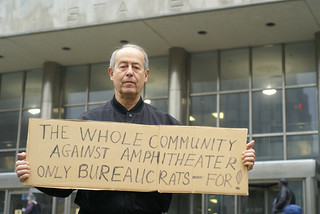 For the gardeners present at the court that morning, it could not replace the Boardwalk Community Garden.

“It is not a garden for me,” said Opendik , talking about the Surfside garden. “There is a lot of concrete, and it is surrounded by buildings. I don’t think that there is enough sunlight to grow vegetables.”

And on December 14th, after nearly two years of failed mediation, abortive attempts to start the case, and judges recusing themselves, a group of gardeners from Coney Island and advocates from around the city met on the steps of the Kings County Supreme Court in downtown Brooklyn.

Inside the courtroom, Judge Peter Sweeney called the three lawyers – for the garden, of the city attorney’s office, and for iStar – to his bench. The gardeners leaned forward on the hardwood benches to hear the muffled debate, until the judge announced that he would hear the case that afternoon.

When the lawyers re-assembled, they brought arms full of documents supporting their positions.

The gardeners’ argued that the City did not have authority to sell, because the land was under the jurisdiction of the NYC Parks Department, arguing it could only be sold by a vote by the NY state assembly.

The City and developer’s argue that because the land is a “Greenthumb” site, it is explicitly temporary. Greenthumb is a city program that provides support to over 600 gardens.

“Greenthumb was where you could park land for interim use,” said Henry J. Stern, the Park Commissioner in 1997, to a reporter. “These were sites of abandoned buildings that were torn down, leaving a gaptooth in the block.”

The Boardwalk Community Garden was created in 1997, when eight Coney Island Gardens were turned into private developments.

“We are claiming that it is implied parkland,” said Joel Kupferman, the lawyer representing the gardeners’ claims, Director of the New York Environmental Law and Justice Project. “We believe that we fulfill Glick rules for what is implied parkland.”

On June 30th, the New York Court of Appeals decided on Glick v. Harvey, concerning the development of community gardens by New York University’s expansion. The court ruled in favor of NYU, citing the “refus[al] [of] various requests to have the streets demapped and re-dedicated as parkland.”

Having heard the arguments, Judge Sweeney will rule on whether the case will go to jury trial.

For the gardeners, this means more waiting. They punctuated their day in the courthouse with a group hug.

“It was a community (the garden), African American, Mexican, from Puerto Rico, Russian, Ukrainian, from everywhere, very friendly,” Aleksandr Sokolov, Coney Island resident and Russian immigrant. “And they ruined our community.”