Sergey and Lidya Stepanchenko with their daughter Natalya in her Manalapan, New Jersey apartment. In the two months since they arrived from Ukraine, they’ve been unable to access desperately needed medical care. Photo by Nikol Mudrova

At first, the Russian invasion seemed abstract to Sergey and Lidya Stepanchenko, an elderly couple, living in Vinnytsia in western Ukraine. They refused to accept the possibility of war and wanted to wait out the conflict in their apartment, even as bomb sirens sent them up and down five flights of stairs multiple times a day. As their daughter, Natalya Stepanchenko, watched the escalating conflict from New Jersey, she was determined to get them out of the country, pleading with them to come live with her in the United States. It didn’t seem like they would budge. When eight Russian cruise missiles destroyed Vinnystia’s airport on March 5, she was faced with an unimaginable decision: Leave her parents’ safety in the hands of fate or travel to a war zone and rescue them.

After a taxing journey, the couple has spent the past two months in Manalapan, New Jersey, facing a new challenge: Accessing medical care. Stepanchenko hoped her parents would obtain refugee status, which would give them the medical care they need. However, the American system is notoriously backlogged, even with President Biden’s promise to take in 100,000 Ukrainians. Refugee resettlement groups like the Hebrew Immigrant Aid Society (HIAS) have cautioned that Biden’s ‘Uniting for Ukraine’ initiative is ‘not a panacea,’ primarily for its reliance on humanitarian parole. Over five million Ukrainians have fled their country since the war began, and for those seeking to come to the US, the confusion has led to desperation, with thousands traveling to Mexico to enter the country through the southern border. Many, like the Stepanchenkos, are struggling to figure out how to access medical care and social services.

For Sergey, 84, an insulin-dependent diabetic, the consequences are potentially dire: Because he needed to leave in a hurry, he was only able to procure a two-month supply of insulin. Stepanchenko has worked tirelessly to find her parents the medical support they need to no avail. The process has turned into such a fiasco that Stepanchenko is now considering sending her parents back to Ukraine.

Stepanchenko, a nurse for over 25 years, was working a double shift at an adult care facility when she saw a TV report about the bombing, and by the next afternoon was on a plane  to Clu-Napoca, Romania. From there she drove to the small border town of Siret, where Ukrainian refugees gathered to flee their country. Among other reasons, Sergey did not want to leave because his access to Ukraine’s universal healthcare system provided him his insulin for free. But after hearing their daughter was already en route to rescue them, her parents  reluctantly agreed to be transported by extended family to meet her there.

Stepanchenko recalls the surreal search for her parents at the border where the line approaching the chain link fence separating Romania and Ukraine was `three-miles long, three-rows wide’ with fleeing Ukrainians. “I call them over and over again, and there’s so many people and everybody is bundled with big jackets because of the cold, so I just kept walking and walking down the line,” said Stepanchenko. Eventually, she saw a man in the shape of her father answer his phone. “I almost couldn’t believe I found them. We hugged and cried – they had already been in line for over two hours. It was very emotional.”

A five-hour bus ride brought them to the Casa Seniori Eden, a church in Gherla converted into a makeshift refugee center. As the only trilingual person on a bus of 42 people, Stepanchenko aided the church volunteers translating English, Russian and Ukrainian. Four days later, they finally returned to Cluj Napoca where it took another six days to arrange a flight back to the U.S. For a brief moment, Stepanchenko thought the hard part of their journey was over. But a conversation with an immigration officer once they touched down at JFK airport sent her anxiety in a new direction. 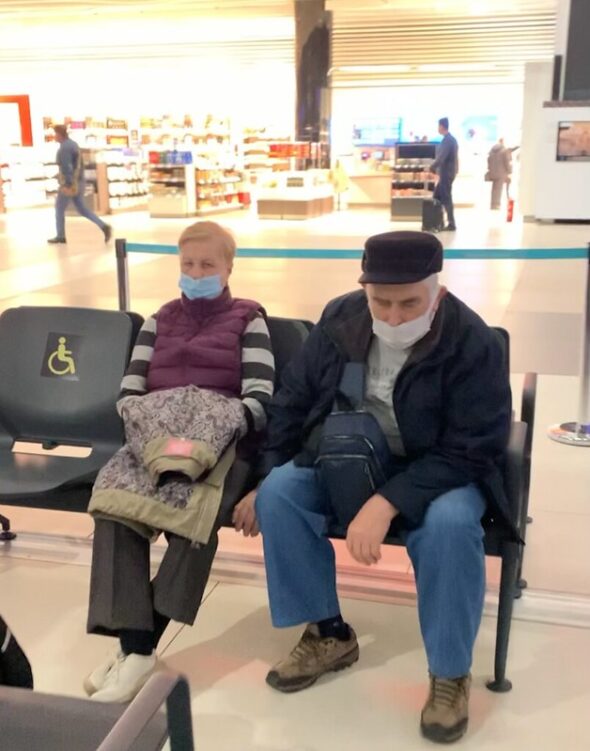 Sergey and Lidya exhausted in the Cluj Napoca airport, awaiting their flight to the United States with their daughter Natalya. Photo courtesy of Natalya Stepanchenko.

Confusion and frustration mount back on US soil

“They asked me why I didn’t go to the American Embassy and seek refugee status there,” said Stepanchenko, thinking back to how impossible it was to plan amidst the pandemonium. “They say because they have visitor visas, they would need to apply for adjustment of status, and she wasn’t even sure if that could happen.”

Stepanchenko moved her parents into what used to be the office of her apartment and has taken up a third job as their primary caregiver. Although Stepanchenko’s parents have found some semblance of a routine, they’ve been understandably struggling to make a new home as theirs remains under assault. Any bit of free time she’s had in the past two months has been dedicated to figuring out her parent’s healthcare puzzle.

Unable to afford insulin on her own, Stepanchenko’s first instinct was to start a gofundme to raise the $25,000 she’d need to get her parents the necessary insurance in New Jersey. She’s raised over $3,000 thus far, but in a race against her father’s dwindling supply of insulin, Stepanchenko is exploring every angle possible. With the help of her nephew, it took her over six hours to fill out the application for Temporary Protection Status (TPS), which was recently extended to Ukrainians in the US before April 11. However, TPS is primarily utilized for undocumented people seeking access to work, and it remains unclear if her parents qualify. The immigration officer advised her to apply for an adjustment of status and renounce the B-2 visitor visas her parents have held for 20 years, yet the process is painfully slow, sometimes taking between eight and 14 months. And humanitarian parole – the immigration designation her parents could obtain under ‘Uniting for Ukraine’ – requires an American citizen to sponsor a two-year maximum stay and will not necessarily ‘provide them refugee benefits or a pathway to permanent residence,’ according to the HIAS.

“I’m just very frustrated, my parents frustrated, it should be easier than this and less confusing,” said Stepanchenko. She’s written to Ukrainian organizations in the tri-state area and to diabetic associations across the country, all without a clear direction to send her in. Lawyers tell her the fastest way her parents will receive support would be through purchasing their own coverage or buying insulin outright from vendors – but this again is less than ideal. In spite of reduced cost options, the drug remains expensive and can cost between $175 and $300 per vial, with patients needing multiple vials per month.

As their limbo stretches on, Sergey and Lidya are increasingly homesick and pessimistic about when they’ll return home – or if they will at all. Up until recently, Stepanchenko had been resolute in believing that bringing them here was the right decision. Now, she’s not so sure.

“It’s your parents, you know?” she said, swearing she’d make the journey a hundred times over. “After they left, they still bombing, and I couldn’t have left them there.”

My family is in a similar situation, although not the elderly parent situation and I feel Natalya’s frustration. Because the insurance companies are making the rules it is increasingly difficult to find an affordable care and dealing with the vendors directly can be hit or miss. Part of the care package for the Ukrainian immigration from the administration needs to be assistance with the health related costs. Just providing an employment permit is not enough as refugees are not able to get jobs with companies that offer medical benefits. This is a good example of the assistance that’s only halfway thought through with many people realizing that they cannot afford to stay and deciding to leave the US. Or perhaps this was the idea behind this from the beginning