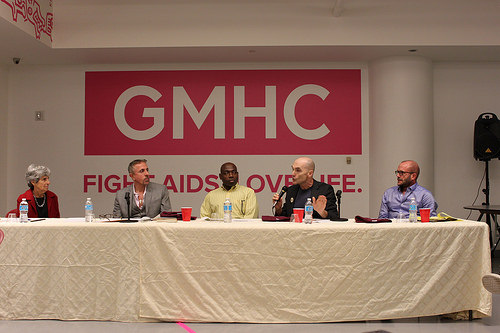 Frequently the problems of middle age are something young people dread. For one group of men, getting to discuss those issues is a remarkable gift.

Oree is HIV positive. He along with two other AIDS survivors, Perry Halkitis and Jim Albaugh spoke in a forum cleverly named “We Aren’t Dead Yet! What Do We Do Now?”. The forum held by the Gay Men’s Health Crisis(GMHC) in their Chelsea office yesterday evening, sought to sort out the problems middle age men with HIV face.

The topic attracted a jovial crowd of mostly men, but when it came time for the veterans of the disease to tell their story a hushed reverence fell over the crowd.

Oree was 19 when he contracted HIV, Halkitis 25 and Albaugh 26. It was at the height of the AIDS crisis in the late 1980s and before the advent of HIV medication. They had little hope for anything more than a grim future with that diagnosis.

Two years to live was the typical prognosis. Then in the mid 1990s, an anti-viral medication became available making HIV a manageable disease patients could live with for many years. Now nearly 30 years later, survivors face middle age knowing very little about what to expect. 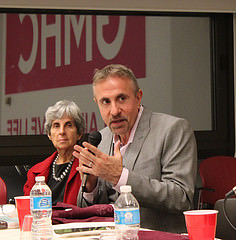 “We are unfortunately the first of many generations to age with this disease” said Halkitis.

Halkitis, the GMHC forum moderator, is an NYU professor, author of “The Aids Generation: Stories of Survival and Resilience”. Halkitis, 51, like Oree and Albaugh, lived an adult life defined by the disease.

“Almost every generation faces a crisis. The ones that preceded us faced Vietnam and World War II. This was our crisis, very much a war against a silent and deadly enemy,” said Halkitis.

Which is why he believes this forum is of such high importance. He hopes the community of survivors, especially from the AIDS crisis generation, can come together and create a model for the next generation to deal with aging more successfully.

The issues raised during the discussion were varied. They spoke of the positive and negative health benefits in the changing medical landscape since the Affordable Health Care Act; learning to deal with social stigma; and the troubles of holding a steady job while battling illness.

The most frequently raised issues were of depression, isolation, and the frustrations that come with the disease.

“Sometimes it’s just easier to stay in your apartment away from people and not deal with things. It’s a struggle to get out every day,” said Albaugh. The crowd murmured in agreement. 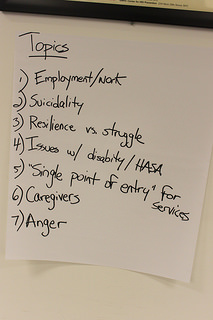 Albaugh, 53, had his HIV progress to AIDS in 1990 and experienced a long and difficult struggle with depression ever since. Today he is in much better health, but always mindful of the challenge of survival.

Because HIV does not have a cure these men have learned to come to terms with its never ending presence. Over time they became resilient to its permanence.

“I call it my guest that occupies a lot of space but pays no rent,” said Oree with a smile.

The forum ended with a long list of ideas GMHC plans to take into brainstorming sessions to create new programming to meet the needs of the aging community. They hope the model they create is something worthy of being used nationally.

“We can come forward as proud models and bridge the gap to the next generation as they fight this disease,” said Halkitis.