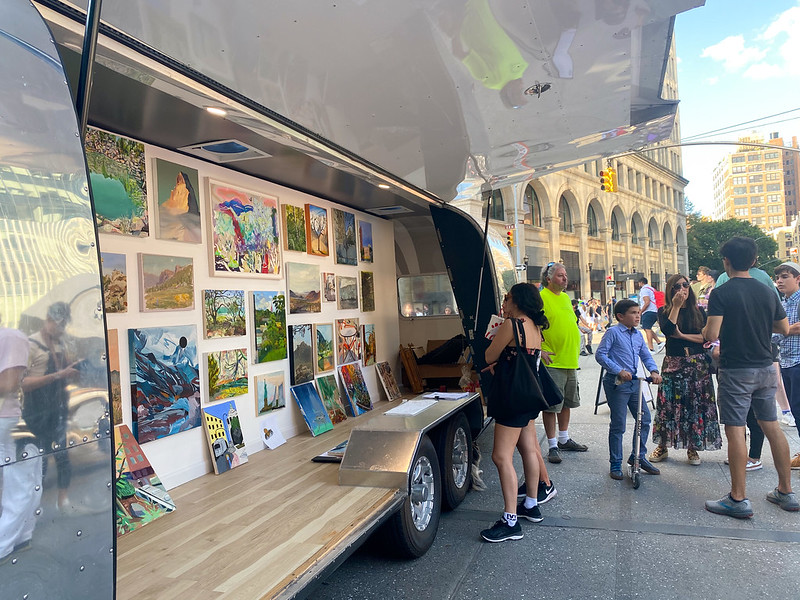 Passersby gather around the opening of the 31-foot silver Airstream in Astor Place Plaza to view the art on exhibition and talk to artists from the Guild of Adventure Painting. Although the art was not for sale, many of the artists were present and able to answer questions and give their information for commission or further contact. Photo by Michelle Ng-Reyes

A 31-foot silver Airstream, turned outdoor art gallery, was parked next to the cube in Astor Place yesterday. The side of the Airstream was open and filled with painted canvases depicting nature scenes from Joshua Tree National Park in California to the red rock canyons of Nevada. It was created by the Guild of Adventure Painters, in partnership with the 1969 Gallery, to bring art to New Yorkers during a pandemic.

And passersby got to watch four artists create their work.

“It’s a weird thing to be a performance,” artist Staver Klitgaard said as she painted while glancing at the people watching her. “This is like a new adventure for me.”

Art shows have been hit hard by the Covid-19 pandemic. Exhibitions have been cancelled, galleries closed down and artists unable to show their work. As much as artists have been limited, people who enjoy art have also been affected.

“I’ve missed seeing stuff like this,” Manhattan resident Kristen Kasmai said as she watched an artist carry his finished canvas inside the Airstream.

This mobile exhibition is part of The Armory Show’s Off-Site project, whose purpose is to introduce “international contemporary artists to a wider audience and [inspire] dialogues around art,” as well as bringing back art fairs in a safe manner during the pandemic.

“While it was inspiring to see artists adapt and share their art through social media or online, not all art is made for the digital forum,” Kasmai said. “In-person allows the incorporation of textures, and interaction, and things that digital media inherently can’t display.”

The Armory Show is one of the largest international art exhibitions in New York that helps showcase both prominent and up-and-coming artists’ work from around the world. Since March 2020, The Armory Show has been unable to host their in-person events and have moved to a mainly online platform to showcase and sell their art now.

As a result, Armory Off-Site was created this year and hosted four outdoor, interactive exhibitions scattered around Manhattan sponsored by galleries and artists from New York, Los Angeles and London. When The Armory Show first began their selection process for their Off-Site exhibitions, the Guild of Adventure Painters was sought out.

“The way we got here was the 1969 Gallery asked us to submit a proposal for them to submit to the Armory Show,” artist and co-founder of the guild Johnny DeFeo said. “And then The Armory Show selected our project.”

As a result, artists painted inches away from passersby next to a large silver Airstream in Astor Place. An older woman, holding a cigarette and a Four Loko Gold, walked up to Klitgaard’s easel.

As studio painters, none of the artists at Astor Place were used to having anyone watch their process or speak to them while they worked on their art. But now, crowds gathered around each easel, with strangers complimenting them and discussing color theory. 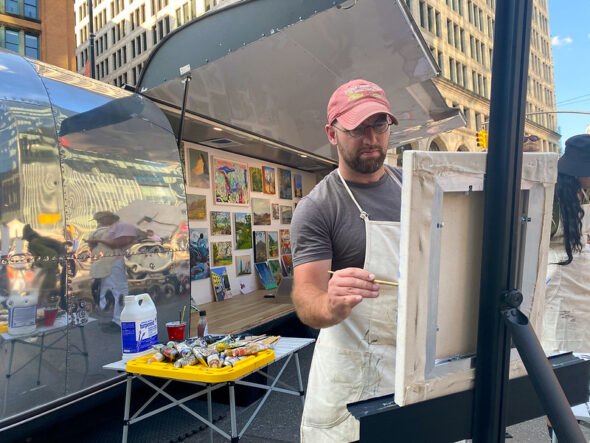 Co-founder of the Guild for Adventure Painters Aaron Zulpo paints a nearby building next to the Airstream exhibit alongside other “plein air” painters. Behind him, the Airstream with art on display from previous days of their outdoor exhibit is shown. The art is not for sale, but artists are available to talk to anyone who walks up to the display. Photo by Michelle Ng-Reyes

The Guild of Adventure Painters was created in 2018 by artists Aaron Zulpo and Johnny DeFeo with the goal of taking studio painters, who mainly work indoors alone, outside of their studio and into nature to paint “en plein air,” or the act of painting outdoors without traditional rules or structure of studio and indoor painting. It is an “exploratory art residency” that focuses on outdoor explorations while also helping artists get out of their comfort zones and relate more to the art they create.

“It’s funny because all my paintings take place in nature, but I don’t go out in nature to paint them,” guild artist Caleb Hahne said. “I just use a catalogue of nature pictures. So thinking outside of my studio and putting me into an actual environment was really nice, and it’s made me rethink how I paint.”

Many other artists also find a new sense of purpose and peace while travelling to different states and painting outdoors. Its founders also hope it helps promote self care and mental health during an artist’s career. 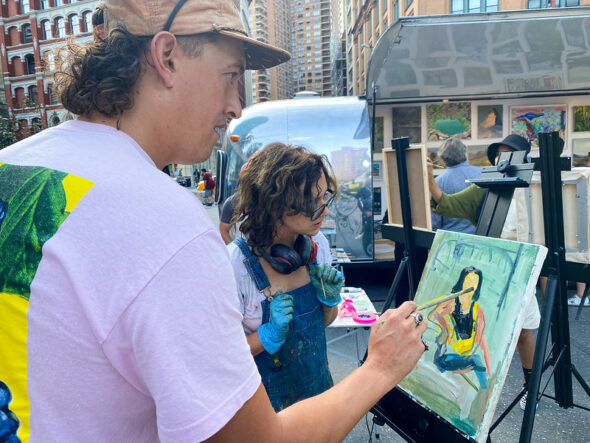 The Guild of Adventure Artists co-founder Johnny DeFeo (left) adds brushstrokes to artist Staver Klitgaard’s (right) “en plein air” painting, at her request for him to “make a move” and add something to her art. Photo by Michelle Ng-Reyes

With the Guild’s focus on nature and outdoor landscape painting, having their exhibit and painters placed in the middle of the city, in a plaza with only a few scraggly trees, made the art-filled Airstream seem even more out of place.

“The Armory Show chose this location for us,” DeFeo laughed. “We knew that we would be in a park in the city, we just imagined it would be more like Central Park.”

But the location has pushed its painters to look for nature and art in different places than they normally would.

“It’s forced me to look for the moments of optimism that I find in the architecture,” artist Hahne said. “I noticed flowers growing out of bizarre spots, or even just these trees planted here in front of a bank, you know? I think that being in a city like this, when you have those little glimmers of beauty or hope it’s really hard not to grasp onto them.”