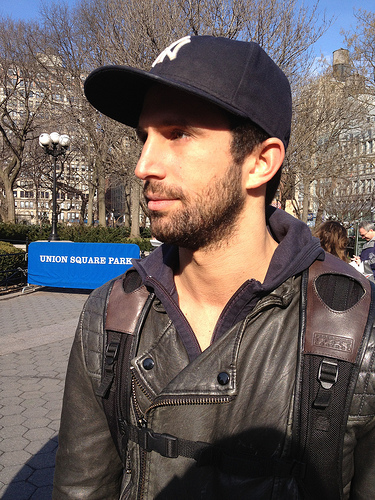 Alex Kiton, 26, watches as his tutees attempt to approach and chat with women in Union Square. A professional pick-up artist employed by an international company, Kiton regularly leads practical pick-up lessons in public places like bars, bookstores, and parks. Photo by Jordyn Taylor

It was an unseasonably warm Sunday afternoon in early March, and a group of around 10 strangers—all men—had gathered outside the Whole Foods Market in Union Square. Around 3:45 p.m. they spotted the man they were waiting to see, gliding toward them in sunglasses and a leather jacket: Alexander Kiton—the man who would teach them how to pick up women.

After some brief introductions (some of the men were new to Kiton’s Sunday class; others had been before), Kiton led the group across the street to the tiered plaza at the heart of Union Square. It was time for pick-up practice.

Kiton, 26, is a full-time financier by day; by night and on weekends, he’s a professional dating coach—a real-life “Hitch”  out of the 2005 film. After years of personal practice, Kiton developed his own unique strategy for picking up women—one he says is better than anything you’ll find in today’s popular pick-up literature. From one-on-one and group sessions to YouTube podcasts, Kiton is now determined to share his romantic tactics with the bachelors of America and beyond.

It all started in Kiton’s school days. Surprisingly, despite being smart, having friends, and playing varsity sports, the dating coach’s love life was frustratingly lacking.

“I had all these things that I thought would make me attractive and I still didn’t get any girls,” Kiton said. And that puts a guy in a really difficult situation. Because it’s one thing when you’re like, ‘Why am I not getting any girls?’ And then other guys, they look at you and they’re like, I bet that guy gets a lot of girls. And as a guy, [and] a lacrosse player, you can never admit that. So you’re almost living this lie.”

The summer he was 21, Kiton took a girl out to dinner, where they ran into one of his friends, Bill. By the end of the night, after the group had gone out to drinks together, it was Bill—not Kiton—who ended up scoring future dates with the girl.

Though the betrayal was painful, it would also provide fuel for Kiton’s future success.

Soon after, Kiton found out that Bill had learned his moves by reading a popular dating how-to book.

“I was like, ‘I’m going to go buy this book and be better than him’,” Kiton said.

The book in question was Neil Strauss’s bestseller, “The Game: Penetrating the Secret Society of Pickup Artists.”  The book flew off the shelves when it was released in 2005.

“Almost every guy you know has read it, I guarantee it,” said Kiton.

Complete with recommended pick-up lines and bodily gestures, “The Game” lays out a step-by-step guide for men to snag a hook-up.

But the artificiality of Strauss’s proscribed tactics weren’t working for Kiton, who had recently moved to England to study at the London School of Economics.

“I went out and tried this [stuff], and got even less results,” Kiton said.

Looking back on his failed attempts at picking up the London ladies, Kiton now understands where he went wrong, and why “The Game” wasn’t earning him any playing time.

Leaving “The Game” behind, Kiton started applying his new-and-improved strategy to his pick-ups—both personally, and professionally. In 2008, his unique, effective tactics landed him a job with PUATraining,  a self-described “international seduction training company” that pairs professional pick-up artists—called “trainers”—with single men looking to find romantic partners. Kiton worked as a “trainer” in England, Denmark and Texas before ultimately settling in New York’s East Village, where he fits in PUATraining around his 80-hour-per-week day job.

Sometimes, he’ll take a client for practical training at a bar, where he’ll sit in the corner and observe their attempts at talking to women. Other times, he’ll fit a client with a hidden camera, send him off toward a female target, and then analyze the video with the client once he’s returned. On some weekends Kiton will give lectures, or he’ll lead free group classes in Union Square. His mantra is always clear: don’t plan out the “perfect” opening line or the “coolest” conversation topic—just be yourself.

Some clients, like David Rothblatt, 35, of Nassau County—who has read “The Game” “50 to 100 times in the past 7 years”—question Kiton’s strategy.

“The real Alexander is cool,” said Rothblatt, who has attended Kiton’s Union Square classes three or four times. “[But] what if I’m a tall, smelly pimply kid with glasses? I’ve been trying to attract women in New York City and Long Island for 6, 7 years, and they go for guys who look a certain way and make them feel a certain way.”

Still, Rothblatt acknowledged that Kiton is a talented pick-up artist, and that the Union Square classes have been helpful to him.

“I got phone numbers,” Rothblatt said in regards to one of the classes he attended. “I feel good around [Kiton]. He’s a positive guy, he doesn’t B.S. you. He doesn’t sugar coat it. He’s a good guy, but he’s direct. I respect that.”

Kiton may have his skeptics, but there’s no doubt that his strategies are winning over the women.

“A bunch of people got married,” Kiton said of his clients. “I’ve been told I changed people’s lives all the time. It’s very cool.”