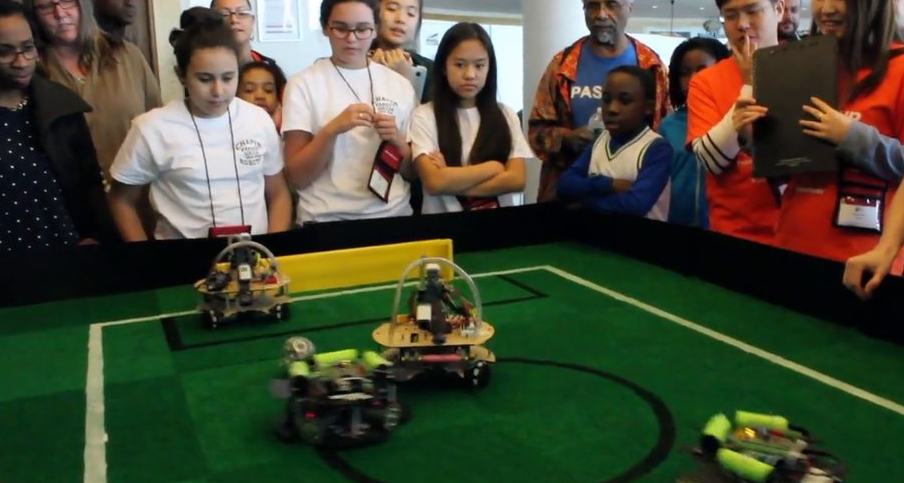 What happens when you give middle school girls access to circuits and coding programs? Robots that can play soccer.

“I think some people think robotics and stuff is more for boys, but it really isn’t, it’s the same,” said Allison, sixth grader and member of the Golden Gators robotics Club. “I really like robotics and I’ve never felt that way.”

At Chapin, a Manhattan all girls school, four young ladies make up an after school robotics club. They decided almost last minute to participate in RoboCup Jr. USA, a qualifying competition for the international tournament by the same name. Over the course of the school year they learned to program, solder and build micro electronics. David Arnstein, club supervisor and science teacher at Chapin, explains this is a unique age for young women in science, especially at an all girls school.

“They don’t know that there are gender differences around math and science and robotics they just do it,” said Arnstein. “There’s a huge drop off of women in technical fields in computer science and engineering.”

According to a 2015 National Science Foundation Study, high school girls are taking science courses at similar rates to boys. It is at the university level, where women’s participation begins to differ by field. Life science remains at 50 percent participation while engineering is at 19.2 percent and computer science at 18.2 percent.

For now these girls cannot imagine losing interest. Team member Amelia dreams of being a neuroscientists while seventh grader Cindy and Tallula want to do something in either engineering or computer science.

It’s now competition day. The Golden Gators put their robots “Christiano Robo-ldo” and “Tim How-bot” to the test at Horace Mann School in the Bronx. The Gators were the only all girls team in the soccer division.

Amy Euguchi, the organizer of the event, said this year girls participated at nearly 50 percent, the highest since she started the competition 13 years ago.

“What we really want to do here in the U.S. is to attract the girls into STEM through robotics,” said Euguchi who is also a professor of education at Broomfield College. “We used to say girls are not interested in competing in the past, but I think its kind of changing a little bit.”

At the end of the tournament many girls received trophies. The Gators were not among the winners, but that has yet to affect their love for science. The girls met post competition to brainstorm for the following year.

“We fell a little short of our expectations,” said Cindy. “But it was a learning experience and we are probably all going to do it next year.”

Once a unanimous consensus was reached that they all will all be back for another season, hopes turned more positive.

If they remain motivated, these young scientists may be the generation that changes the statistics.

Great article! Shows that girls really can participate and do well in what has always been considered a “boys only’ club! Fabulous job, Megan!