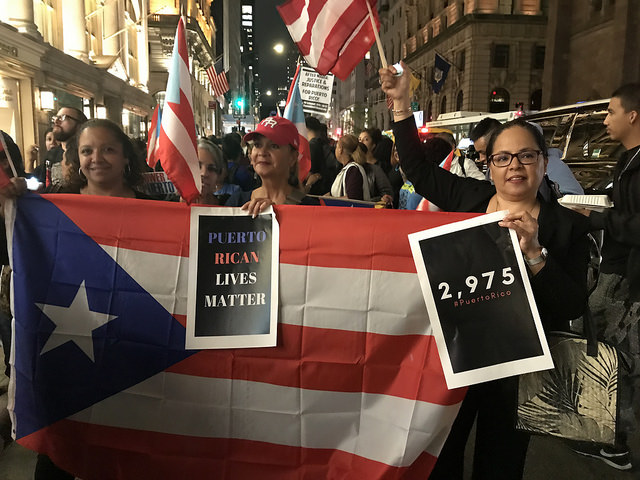 Yolanda Volden (middle) and Marilyn Molina (right) at the protest in front of Trump Tower yesterday. The one year anniversary of Hurricane Maria fueled their demand for better hurricane relief efforts and anger over what they say was a lack of support. Photo by Alexandra Myers.

On the first anniversary of Hurricane Maria yesterday, many Puerto Ricans marched to Trump Tower from St. Bartholomew’s Church in Midtown Manhattan, angry at how the federal government has handled post Hurricane Maria efforts.

“They have been absolutely negligent,” said Mercedes Verdejo, 49, one of the protesters, who is from the Upper West Side.  She was joined by hundreds of other supporters.“I was actually trying to see if a government can be charged with negligent homicide.”

When the category 4 hurricane struck Puerto Rico, it destroyed everything in its path. Many residents didn’t have power, water, food and medical treatment for months. Villages have been struggling to rebuild. Thousands of families still need to cover their homes with blue tarps while they wait for repairs.

Protesters believe that the federal government is to blame.

“They didn’t treat us like human beings,” said Carlos Matos, 20, who is a refugee. “They didn’t show any type of preparation.”

After the storm, Matos was separated from his family for two weeks unable to communicate with them at all. Eventually, he fled to New York. He was one of the students that NYU offered undergraduate services to.

He said that Puerto Rico had enough available shelters, but no one was prepared and they had no resources.

“I remember listening to truckers,” said Matos. “People ready to transport these resources to all parts of the island, saying we have been here for days and they have not told us what to do and have not allowed us to move through the island to get these products to the people.”

Many protesters waved Puerto Rican flags, heads sign that read, “Puerto Rican Lives Matter” and “Boricuas Remember” as they walked to Trump Tower about a half a mile away. They were upset about the recent comments from the Trump Administration about hurricane relief efforts.

“Why are we Americans when we need to fight his wars, pay taxes, for everything else but for this we don’t serves justice and we don’t deserve help,” said Yolada Volden, 57, as she held a Puerto Rican flag.

Earlier this month, George Washington University released  a study that showed around 3,000 people have died due to Hurricane Maria. This is including those who were affected after the storm. The findings were 46 times larger than what the government previously estimated back in December.

President Trump responded to the study, tweeting that “3000 people did not die in the two hurricanes that hit Puerto Rico” and that he thinks it was an “incredible unsung success.”

“He is out of line, he has no filter,” said Volden. “He is totally inappropriate as the president of the United States. I am just ashamed to say that I am an American and that he is my president.”

Protesters were also very concerned that these circumstance will have more of a long term impact on the mental state of victims.

“More struggles are regarding mental health,”said Mantos.”The trauma has taken on my family’s bodies and their minds. They don’t have the time to heal because the economic crisis has them working all the time.”

Even through all the hardships, Puerto Ricans are standing together to rebuild  their state and each other.

“We will help the Island rebuild,” said Marilyn Molina, 57, whose parents were trapped in their home during the storm. “If I have to invest every vacation I take by going back to Puerto Rico to build the economy, that is what I will do for the rest of my life.”