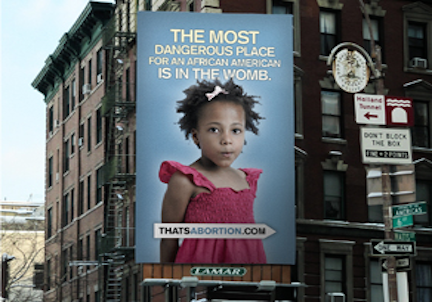 Life Always anti-abortion billboard in SoHo targeting African-Americans drew criticism last month. The billboard, which has since been taken down, is part of a growing national campaign to deter Africans-Americans from having abortions.

For some anti-abortion groups, the new target is the African-American community—and they’re using billboards to get its attention.

The organization Life Always put up a billboard in SoHo last month featuring a young African-American girl and the words, “The most dangerous place for an African-American is in the womb”—part of a growing national campaign to deter Africans-Americans from having an abortion.

“Our goal, our ambition is to go across America with these messages and to go into the large urban areas where there are sizable black populations and communicate our message to them,” said Life Always board member Stephen Broden.

Lamar Advertising took the sign down two days after it went up amid concerns for public safety. Yet Broden said the campaign still stands by its message.

“I am disappointed that those who made the biggest squawk about it, who made the largest protest against the sign, did not capture the essence of our message and that is abortion is decimating our community,” he said.

In New York City, the rates are even higher. According to the city’s Department of Health and Mental Hygiene Bureau of Vital Statistics report for 2009, more than 40,000 induced abortions were among African-American women—almost twice the number of live births within the black community.

But a report released in January by the Guttmacher Institute says the majority of abortion clinics are not necessarily in African-American neighborhoods. The report found that “less than one in 10 abortion clinics are located in predominantly African-American neighborhoods, or those in which the majority of residents are black.”

Ryan Bomberger, co-founder and creative director of the Radiance Foundation, which also uses billboards to promote an anti-abortion message, said the organization does not focus “solely on the black community; but when it comes to abortion, it is unavoidable to address where the most damage is being done.”

The campaign is now in California with 70 billboards in the Los Angeles area, mostly in predominantly black neighborhoods.
The foundation has had similar campaigns in Arkansas, Texas and Wisconsin.

The billboards are funded through partnerships with local anti-abortion groups. Bomberger said the cost of each sign depends on the market where it is placed; the first campaign in Atlanta cost $20,000 and $6,000 in Los Angeles.

Several black public officials who spoke out against the SoHo billboard, including Rev. Al Sharpton, called its messages racist.

“The billboard was offensive, especially during Black History Month, and I had intended to hold a press conference Friday in front of the billboard to protest the message of racial profiling and against a woman’s right to choose,” Sharpton said in a press release.

Tolbert.mp3
Laverne Tolbert on how she became an anti-abortion activist.

La Verne Tolbert, the first African-American to serve on the Planned Parenthood board in the 1970s, supports the Radiance Foundation’s ad campaign. She initially believed in a woman’s right to choose. Yet as soon as she learned more about the practice of abortion, Tolbert said she became an anti-abortion supporter.

During her time on the board, she said that tactics were used to sell the idea of abortion to the women. However she did not encounter any specific conversations about where to locate the health centers.

In Cleveland, there are some sickening highway-side billboards that read, “You are better than abortion,” and heaps of “Crisis Pregnancy Centers” targeting women of color with false information and anti-abortion scare tactics.

I escort monthly at local abortion clinics and the protesters are constantly torturing the African-American women who come in (note: about 50% of the patients are not black) with taunts such as, “That white doctor just wants your black baby!” It is so disturbing that these mostly male, all white protesters try to flip black oppression “blame” onto the clinic staff. How can these people not realize their privilege in assuming not having an abortion would create a better outcome for the mother or child? All across the country, because of historically anti-black regimes in the US (which unarguably are upheld today, not matter how much people want to ignore them), African American women are often stuck in low-income environments with little opportunity for legitimate or secure employment, education, and as a result more likely to have an unplanned or unwanted pregnancy.

The protesters also shout out adoption arguments. Sure, you’ll find some great adoption stories if you’re a white baby born without physical or psychological defects from drugs an alcohol. But the truth is, we have a broken adoption institution which favors the privileged (big surprise). Even if you’re not African American, children experience horrifying orphanage/foster care/adoption situations.

So, why don’t these blatantly racist anti-abortionists spend their time and money providing real resources for women of any race–providing factual sexual health education and affordable, widespread access to contraceptives and health care, or a decent home for an orphaned child. Anything, but please, stop torturing and oppressing women with twisted and privileged justifications against abortion and women (of color).

The comment above shows lack of knowledge. I will give the benefit of the doubt that the person does not intend to propagate false information.

The torture and oppression is in coerced abortions. The #1 reason for death among pregnant women is homicide. (Elliot Institute) Family and boyfriends ranked highest for those deaths.

Women who have had abortions can correctly inform about the results of abortion. Sarah have you spoken to the millions who are suffering forever from abortions? Silent No More can be a good start for you.

Why not inform women of the consequences for ripping another human life from their bodies? Tell them ALL. Emotional and physical risks should be told to every woman seeking abortion. Show them videos of the procedure. Now that is true choice.

Blind choice is no choice at all.

If abortionists think women would still choose death for their child after seeing it all then why don’t they INFORM them of everything. Why are they afraid to show the baby or let the mother hear the heartbeat? THEY KNOW that mother will likely CHOOSE life for their baby. And they will be out of money from that “client”.