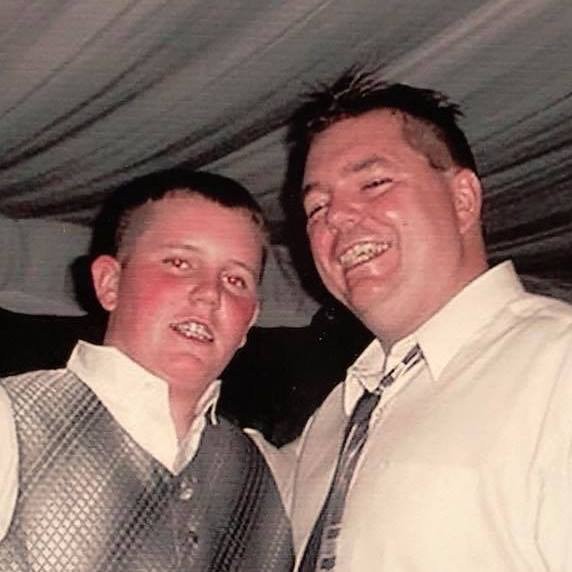 Just four months before Eddie Bisch’s death from an Oxycontin overdose in February 2001, he and his father posed for a photo in October 2000.

Just four months before Eddie Bisch’s death from an Oxycontin overdose in February 2001, he and his father posed for a photo in October 2000.

In 2001, Ed Bisch heard the word OxyContin for the first time, standing outside his home in Philadelphia. Inside, his son, 18-year-old Eddie Bisch, lay dead in his bed from an overdose of the drug. It was the early stages of the opioid crisis. Even local high schools knew nothing of the potent drug, and nobody could predict how it would affect the country in the coming decades.

“The first time I heard the word OxyContin, my son was dead,” he said, recalling how a paramedic had to explain the medication to him. He remembers being told of the drug’s extreme strength and highly addictive quality. Meanwhile, Oxycontin creator Purdue Pharma was downplaying the danger.

Since that day, Bisch has watched Purdue avoid most accountability for their actions. While his son had been using the drug recreationally, and had not been given a prescription, Bisch believes that if the company had been more honest about its addiction rates and the strength of the drug, it would not have spread as it has.

For decades, Purdue Pharma and its operators, the Sackler family, were not open about the dangers of their medication, citing a study that said less than one percent of patients became addicted. But the study had been done in a hospital setting, while patients were under a doctor’s supervision, tainting the validity of the results. Richard Sackler, the former chairman and president of Purdue, has particularly been blamed for the aggressive tactics he used to convince doctors to prescribe OxyContin. In the 1990s, he spoke about creating “a blizzard of prescriptions” to “bury [the] competition” and increase their own profits. Court documents also showed that Richard Sackler did not want to correct misinformation about the drug, and knew of the “significant” misuse soon after it was released in 1996.

Bisch isn’t the only one who blames Purdue for their marketing tactics. The pharmaceutical company, and the Sackler family, have been the subject of more than one thousand lawsuits. And 1,600 of them have been consolidated under one case in Cleveland. Generally, the lawsuits have revolved around the company’s marketing, sales, and production of the painkiller, and their overall responsibility for the country’s opioid crisis.

However, much to Bisch’s distress, the lawsuits have often been settled, letting the company off the hook and letting them avoid long-winded trials, the court of public opinion, and what he sees as true accountability.

“The problem with this, all along, has been that Purdue settles, and in the settlement they seal the records, so the full truth never gets out,” Bisch said, pointing out that the recently settled Oklahoma trial would have been broadcast on television — and by settling, Purdue was able to continue to say they were innocent of all charges. While the settlement cost the company $270 million, Bisch calls it “chump change” compared to what the company makes annually, especially off sales of Oxycontin.

His activism involved attending trials with other parents, watching the company continue to evade genuine consequence for their actions. Bisch remembered one particularly bitter day in Abingdon, Virginia in 2007.

The trial focused on the company’s misleading marketing — which claimed that less than one percent of Oxycontin users became addicted, among other statements — and forced Purdue Pharma and three of its top executives to pay more than $630 million in federal fines, along with fulfilling probation and community service requirements.

However, despite those fines in what was seen as a then-landmark case, many believe Purdue Pharma continued to mismarket the drug. Beth Macy, the author of “Dopesick,” which chronicles the opioid crisis, has also been watching the legal battles.

To Bisch, the way Purdue Pharma has consistently blamed addicts for their situation is one of the company’s most despicable traits. From his son’s death in 2001 to 2007, he ran a website called OxyAbuseKills.com; one of its most haunting features is a series of mini-memorials to those who died of overdoses. It serves as a reminder of those lost – and of Purdue’s role.

“A lot of stuff could have been done to alleviate this crisis,” Bisch said. “They could take Oxy off the market tomorrow, and that isn’t going to change anything now. There has to be a reckoning.”

While the continuous cycle of trials and settlements can be exhausting, Bisch is still hopeful. Recently, a lawsuit in New York was amended to include the Sackler family. The company is currently trying to get a Massachusetts lawsuit thrown out.

“I just hope that, whether it’s Massachusetts or New York, that someone has the balls to take them to trial, all the way to the end,” he said. “And don’t settle. Don’t seal the records. This has been going on for more than 20 years and Pandora’s box has opened now. There has to be some justice.”

My son became addicted to OxyContin in 1998, and died in February, 1999. I had never heard of Oxy either. I found my son dead in his bedroom. I think of the lives that may have been saved if someone had listened 20 years ago. I cannot say anything else, enough has been said. Please, someone, stop this madness.

There’s PLENTY left to be said! We, as parents of loss to this multi-billion-dollar empire and FAMILY, expect and demand that they are held personally liable. The Sackler’s DO NOT get to, at this point be the catalyst for half a million deaths and walk away AGAIN – with no liability and a few spare dollars thrown at the states. My son, 21 years old, had a lot of living, experiencing and a young son, himself. his family is pure, unmitigated evil and could care less about this entire generation THEY have wiped out. I want to see El, Ray, and Timmy be given a prescription for “Sacklers Wonder Drug!” I want the world to see how quickly David and Joss Sackler yank it away. They had NO problem overloading Doctor offices, a 1600 person saled force to ensure EVERY ONE of our kids got a taste. Our kids, DEAD and GONE. Their kids, playing on the beach in WPB and alive and well.