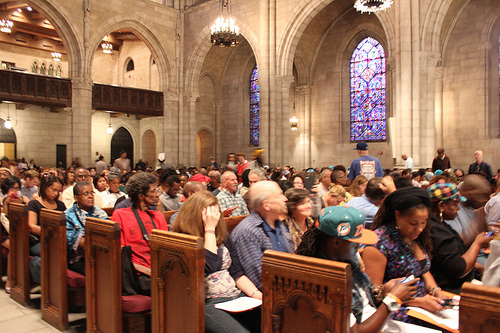 Audience members at Riverside Church await the start of the panel discussion regarding the closing of Attica Correctional Facility. Photo by Alaia Howell

Executive Director Soffiyah Elijah of the Correctional Association of New York said, “The legacy of Attica is a blemish on New York,” and called Attica Correctional Facility “symbolic” of the nation’s prison system.

In September 1971, over 1,000 inmates at Attica Correctional Facility sparked a four-day riot in reaction to brutal living conditions of the prison. The inmates seized control of the prison in an effort to make negotiations with Gov. Nelson Rockefeller.

On Sept. 13, 1971, Rockefeller ordered the New York National Guard to regain control of the prison by opening gunfire on the prisoners, resulting in the deaths of 29 inmates and 10 hostages.

The Attica riots have since been a benchmark for discussions on civil rights and racial issues within the nation’s prison system.

As recently as last year, four prison guards at Attica were indicted on felony charges of assault against a prisoner.

“Mass incarceration reflects a fundamental choice of how we are seen as a global citizen,” said Alexander. “In terms of capitalism and how those at the bottom will be dealt with.”

The powerhouse panel of speakers discussed a wide range of issues including solitary confinement, stop-and-frisk practices by police, and the “prison industrial complex,” a term coined to describe the rapid increase in prison populations and its relationship to socio-economic divides in the U.S.

“This started out with a discussion with me and Pam Africa for the Mumia [Abu-Jamal] book-signing, reserving a room at Riverside and hoping that we could fill up that little room,” said Marc Lamont Hill, associate professor at Columbia University and co-author of “The Classroom and the Cell: Conversations on Black Life in America.”

“Tonight is a start because it gets us in the realm of ideas,” said Hill, who during the discussion asserted that there is a “direct connection between first-class jails and second-class schools.”

Sergio Bejarano, 25, a student at Queensborough Community College and member of Students United for a Free CUNY, a multi-campus coalition of students aimed at getting quality education for the working class through free higher education, attended the event with some of his fellow organization members. They all wore red shirts to symbolize solidarity.

“The discussion tonight gave me a positive outlook on how we can create a paradigm shift,” said Bejarano. “We need to connect the dots and critically criticize the Obama administration.”

“I see political paralysis of two political parties in a tie to Wall Street and vengeful corporations,” West said. “It has been the black freedom movements and anti-racism movements that have reminded America that when America was about to go down, you either renew your democratic possibilities or you become another state of shapeless xenophobia.”

The speakers made a call-to-action for audience members to engage in the efforts against mass incarceration, particularly stressing the role of young adults in the movement.

“I think students are the movement,” said Hill. “Symbolic resistance, if it gets organized, is powerful. We can’t have an anti-prison movement without students at the center of it.”

Attica prison riot anniversary brings out luminaires who call for its closure says:
March 8, 2013 at 2:34 am