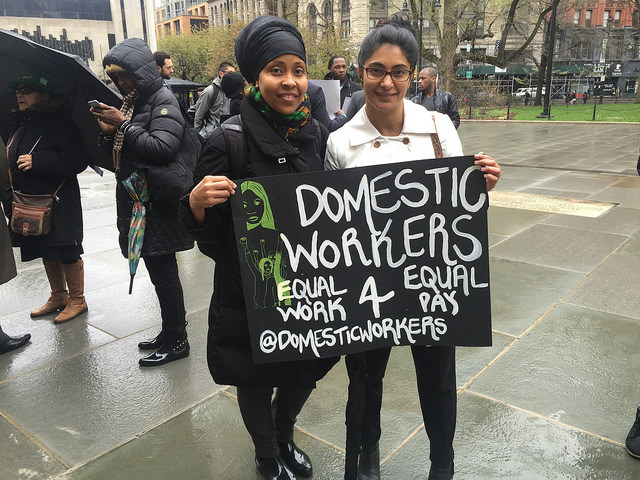 Victoria Ascension, 27, works as the lead line cook at a new restaurant in Brooklyn. Her job description includes everything from prepping food, to expediting orders for a team of four male line cooks, and managing the kitchen staff’s payroll.

But she offered less pay then her male co-workers and had to fight for equal pay.

“I was initially offered two dollars less than the other cooks on the line,” said Ascension. “I know how much everyone makes and I had leverage to negotiate. My boss knows this, he just maybe thought that’s what I expected, to be paid less.”

Ascension’s story is way too common for working women, who nationally make 77 cents to every dollar that men make. It’s called the gender wage gap,. Yesterday was Equal Pay Day and  nearly 40 organizations, along with unions, councilmembers, and elected officials, met on the steps of City Hall in New York City as a call for action.

A day before the rally, Public Advocate Letitia James released a report highlighting the wage gap for women who work in government agencies, citing that it is three times wider than those who work in the private sector.

“The very government that is supposed to protect our equal rights is the worst culprit of them all,” said James.

James outlined solutions to the wage gap in government, stating that employers shouldn’t ask about an applicants previous salary, since it’s bound to be lower, and that a task force should be put in place to comb through each government agency to ensure equitable pay and opportunities. A big part of that would mean creating a family friendly workplace.

“We no longer work nine to five, we need non-traditional childcare 24 hours a day,” said James.

This echoes the presidential nominees’ stump speeches, which put focus on the need for protecting families. In light of Equal Pay Day, Hillary Clinton addressed the issue of paycheck inequity head on at a Glassdoor Roundtable Discussion on the topic.

“Other countries have made it easier for women to be mothers and have careers, to be caretakers, especially of their parents, and have careers,” said Clinton. “Not out of altruism but because they know it’s foolish to let half the population’s talent and energy go unused.”

“Here’s the undercurrent of our homeless crisis,” said Stringer in a speech at the rally. “The women who struggle raising children because often times the men are not around, when you have a 20 percent pay gap, you’re ending up in a homeless shelter with your family and you can’t get out. This is as much a financial issues as it is a civil rights issue. “

Despite recent unanimous support from politicians, some think that the wage gap continues to persist because women choose fields that pay less than men, such as early childhood-education and psychology versus STEM fields.

Public Advocate James’s report shows that while women make 18% less than men, they are also concentrated in low-paying government sectors such as the Department of Education. This is compared to their male counterparts, who are found in the higher paying fields such as the Fire and Sanitation Departments. Despite this, women who work in historically female dominated jobs, such as teachers, are required to attain higher levels of educations for their careers.

“People used to call us daycare centers but we want people to know that we are all certified teachers,” said Lois Lee, the Vice President of the Council of Supervisors and Administrators.

Lee refers to the fact that preschool and daycare teachers are required to obtain levels of higher education in order to cover a range of instruction. This includes STEM, literacy, sports, and music in addition to social and emotional development. Yet these educators are undervalued and underpaid, Lee said, often earning as little as $9 per hour.

“Forty-five years of service, all my masters degrees and I’m still making 50,000 a year,” she said. “We work from seven-thirty in the morning to seven-thirty at night to provide for all the families but what do we sacrifice? Our own families.”