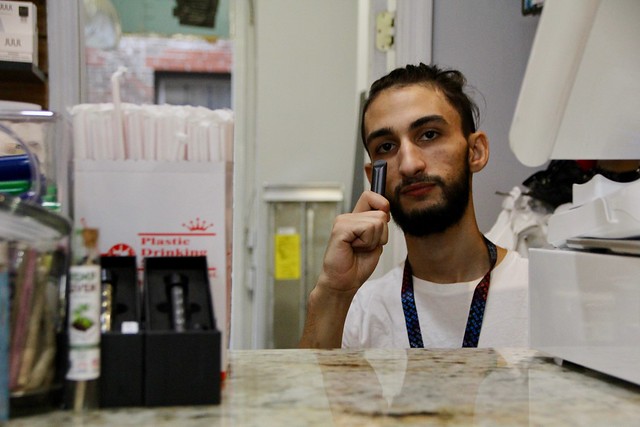 Hazem Flaco, owner of The Village Hemp Shop on MacDougal Street in Manhattan, said that flavored vape products are account for the majority of his sales. Flaco said that the health issue is a result of fake THC oil which is sold or homemade by unlicensed sellers. Photo by Shiyu Xu.

New York City smoke shop owners are worried that the state’s ban on flavored e-cigarettes could hurt their business and open a door for illegal underground markets.

After New York Governor Andrew Cuomo announced an “emergency executive action” on Sunday to ban flavored vape products, local smoke shop owners are concerned that the ban  would directly affect their businesses and eventually force them to close.

Hazem Flaco, owner of The Village Hemp Shop on MacDougal Street, said that flavored vape products take up to around 70 to 80 percent of his sales.

“The majority of my customers were here for the flavored e-cigarette,” Flaco said. “Now most of them are moving either to non-flavored or even worse,  switching back to traditional cigarettes.”

John Ranni, a convenience store owner on Bleecker Street, said around 60 percent of his customers switched to e-cigarette from tobacco over the past few years, and most of them use flavored vape.

“Thank god I sell beers and other products in my store,” Ranni said. “Otherwise I will be out of business just like a lot of smoke shops here.” 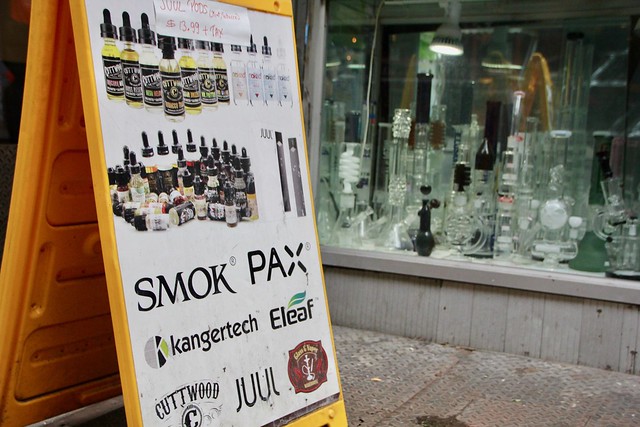 Outside of Convenience store Smoke & Beer on Bleecker Street in Manhattan, a poster of Juul and nicotine oils is placed in front of the store. The owner of the store John Ranni is expecting a decline in the store’s e-cigarette business as a result of the state’s recent ban on flavored vape. Photo by Shiyu Xu.

Following a recent ban in Michigan and a call from President Trump for a federal prohibition on certain vaping products, Cuomo pushed the state for a ban on flavored e-cigarettes.

The effort from both the state and federal levels to ban flavored vaping products is a response to the Centers for Disease Control and Prevention report, which shows 380 confirmed or probable cases of lung disease related to vaping in 36 states and the U.S. Virgin Islands, with six confirmed deaths.

A  2018 National Institute of Health study shows an increasing proportion of high school seniors who reported vaping in the past year with a 10 percent rise as of 2017, and the percent of 12th graders who say they vaped “just flavoring” in the past year also increased to 25.7 percent in 2018 from 20.6 percent in 2017. In July, Cuomo signed a law that raised the minimum age for purchasing tobacco and e-cigarettes in the state from 18 to 21.

What upset both Flaco and Ranni the most, was that the ban would open a door for illegal underground markets to sell more flavored vape products, which they believed were the true cause for lung diseases and deaths.

“It’s just gonna open doors to illegal and black markets, but it’s not gonna do anything with all the health issues that are going on,” Flaco said. “Just imagine how much money that black markets will make out of this situation.”

Ranni said that now he has to check his customers’ IDs because he is concerned that some of them might sell second hand to those unlicensed sellers on the street.

“The problems are the underground markets that sell fake THC oil coming from other countries or even homemade for cheaper prices,” Ranni said. “The health issues are caused by the illegal market products, not the flavored vape.” 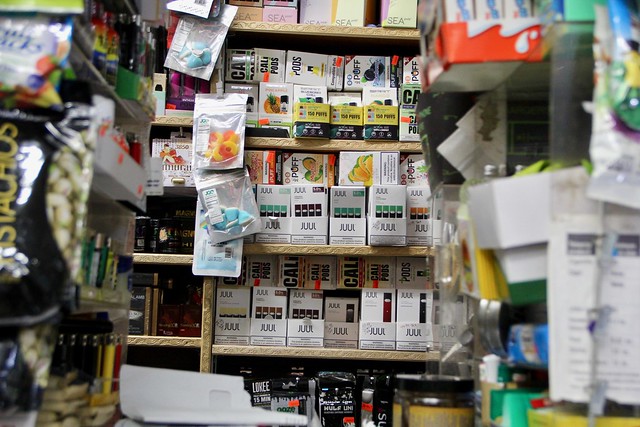 Shelves of JUUL  and other e-cigarette products at Smoke & Beer on Bleecker Street in Manhattan.  Photo by Shiyu Xu.

While FDA is finalizing the plans to ban all flavored e-cigarettes nationwide, including mint and menthol, some consumers express frustration.

Amir Podoswa, 22, a consumer of flavored e-cigarettes for years, called the ban a “government overreach” and “public policy failure” that lacks accurate scientific evidence from CDC.

“People don’t smoke because it tastes good,” Podoswa said. “If the law does pass, I wouldn’t be surprised to see many people, including myself, turn back to tobacco products.”

Podoswa said he understands that the law intends to prevent underage vaping, but without any strong scientific support that confirms the fatal harm of flavored vape, it seems unfair for e-cigarette users.

“I mean, if they really want underage people to stop vaping, how about actually enforcing the currently existing law that prohibits them from doing so, instead of punishing the consumer,” Podoswa said. “The only rational conclusion that I can think of is that this is an effort of the tobacco lobby to regain the market they have lost.”