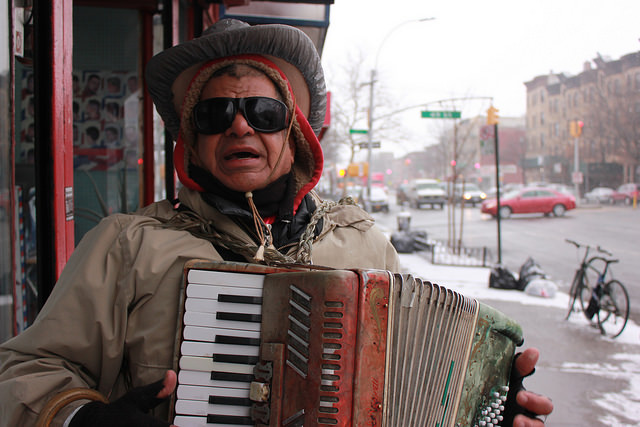 Santiago Lopez, 64 of Sunset Park, has no idea what is going on with Winter Storm Juno. He has no cellphone or television to learn about the forecast, so he is unaware of the incoming snowstorm. He can’t read the newspaper because he is blind. He also has no family to warn him.

“I can only see shadows, no more,” said Lopez early Monday as the snow was starting to fall in this working class, immigrant community in Brooklyn. “As long as there are people walking on the street, it says the weather is not that bad, and I’d stay.”

Disabled and jobless, he makes money by singing upbeat ballads and playing his accordion every morning in his neighborhood. He spends one hour on a block, then moves to the next one. He makes $5 a day at most.

Before he went blind he used to be a roofer. But as his vision worsened, he could no longer do the job and had to rely on savings to pay his $320 rent.

He used up the last of his savings to hire his old immigration lawyer, to work out a deal with his landlord to suspend his rent. It was the same lawyer who helped him get his green card in 2002, 16 years after coming to this country from Mexico.

But his Social Security card and the green card were stolen and they have not been replaced. He carries around a certification from Maimonides Medical Center that says he donated blood at their blood center, to prove his legal status.

“I don’t have anything else to prove my identity,” he said.

When bad weather comes, Lopez stands under the eaves of the shops along the street. He helps shop owners with cleaning and other odd jobs. In return, they let him perform there.

Laia Diaz, the owner of the laundry on 4th Avenue, said that when Lopez started singing in the neighborhood years ago, she recognized him right away.

“He was on television in 1991,” said Diaz. “He went into the UN building with a gun and got arrested. But he is a nice man in life.”

But Lopez said the gun charge was a big mistake.

“My friend wanted me to keep his gun for him. I did, I carried it everywhere. I didn’t speak English and had no idea it was illegal,” said Lopez. “I was just visiting the UN.”

As the snow falls, Lopez sings, but no one stops to listen.