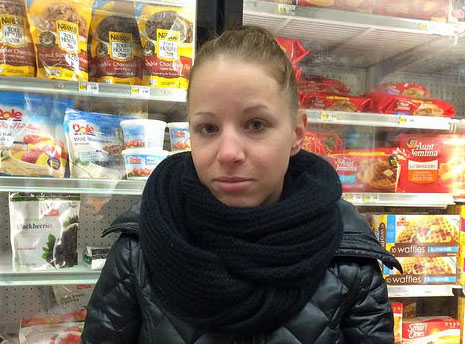 Shallen Ferreira, 27 was stocking up on groceries at Morton Williams in Greenwich Village Monday morning, before the worst of the snowstorm hit the city. Photo by Joanna Bouras

Residents were bundling up and stocking up this morning to prepare for what New York City Mayor Bill de Blasio predicted will be the worst snowstorm in the city’s history. With a high chance of power outages, halted traffic, and over two feet of snow predicted, it was mayhem at the markets.

Morton Williams grocery store in Greenwich Village, was filled with anxious shoppers trying to stock up with flurries already coming down. Lines wrapped around the perimeter of the store as customers scrambled to grab what was left.

“I’m scared and the fact that everyone else is so scared just makes it more terrifying,” said new Soho resident Shallen Ferreira, 27, who moved to the city two weeks ago from Mexico with her husband.

She heard that most stores were closing between noon and 2 p.m. and didn’t want to be stuck home without food. She said the store was already falling behind demand and that she was having trouble finding items as simple as deli meats.

Having grown up in St. Louis, Mo., Ferreira is no stranger to snow, but not the up to two feet forecasters are predicting.

Losing electricity was the least of her worries.

“We had a few outlets out so I left the electrician, a complete stranger, at my house with my cat who attacks people,” said Ferreira,as she placed packaged meats in her cart. “I hope I don’t go home to see he robbed me blind.”

With minimal taxis and cars on the roads, Ferreira is worried about how her husband will get home from work later tonight. It is mostly delivery trucks and snow removal vehicles.

“We didn’t use the subways in Mexico, they were considered dangerous, she said. “But it’s hard to keep spending $30 on a taxi each day, and today you can barely find one.”

Although Ferreira is not a fan of the snow she told her husband that if they can get the door to open she would build a snowman on their terrace.