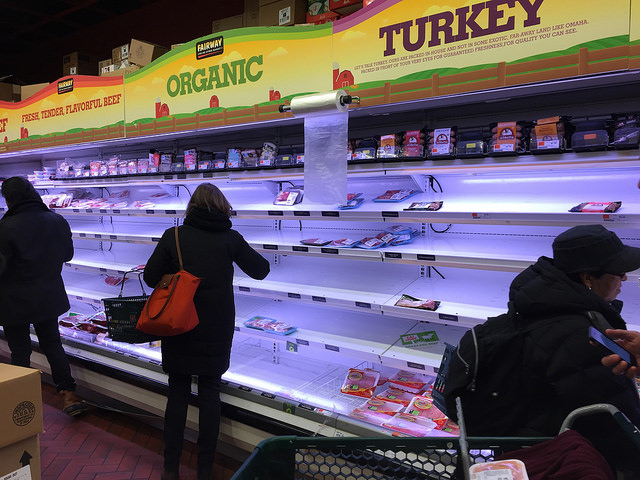 Only a little over two years removed from the devastation caused by Hurricane Sandy, New Yorkers were flooding the supermarkets as Winter Storm Juno was beginning its decent on the city.

“It wasn’t this bad, I don’t think so. Sandy was different because by the time we realized how serious it was, everything was cleaned out,” said Mary Vays, Tudor City. “It’s a good thing, we all know what happened during Sandy.”

Vays, 42, was shopping for her daughter and husband at a mobbed Fairway Market in Murray Hill today. The large supermarket chain’s supplies were running low at 2 p.m., and the line for the register spanned halfway across the border of the store. 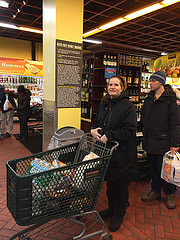 “I just walked around, and I have never seen a line this long, it’s crazy,” said Vays, who has been living in the same neighborhood for seven years.

Despite the rush of customers before the heavy snowfall, the excessive register line, which spanned almost 50 yards back and merged with the group of customers eagerly awaiting cold cuts, moved rather swiftly and did not appear to take longer than 15 minutes. The store’s employees got people in and out of the market, but there was still only a limited supply of food for its patrons. Vays, who keeps kosher, was disappointed but not overly surprised to see the limited kosher section out of food.

Although she was unable to buy any meat products for her family, Vays was able to secure pertinent food items, which in her mind included water, cereal and milk. She was not alone in purchasing water from the supermarket, as almost every customer on line had varying amounts of bottled water in their cart. Unique to Vays’ cart though was baby formula, which like any new mother was atop her shopping list.

“My first reaction was to find baby formula because I have a newborn at home, and then come out and get stuff that we might need for the apartment,” said Vays.

Going to the supermarket is not the only way Vays plans on preparing for Winter Storm Juno. After listening to weather experts she plans on removing items near the windows because winds are projected to be high. With snow already beginning to fall as she was concluding her shopping, Vays trusts meteorologist’s predictions regarding the incoming storm.

“I don’t think they are going to make a huge mistake, maybe a few inches here or there,” said Vays. “With technology as it is these days, I believe they will be able to forecast how much we are getting.”