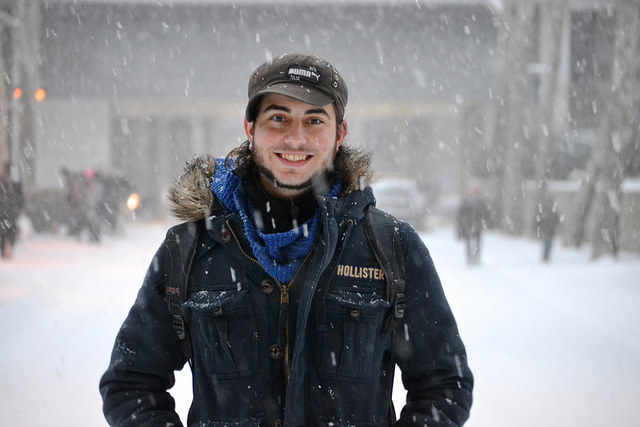 Markus Zakaria, 22, outside his apartment on campus at NYU during the blizzard. Photo by Christina Dun

It’s the first day back to school and already there’s a snow day.

For many students living in New York City for the first time, alerts of “Snowmageddon 2015” or #NYCBlizzard is something new to experience.

“This is nothing like Dubai,” said Markus Zakaria, a music technology grad student at NYU who lives on campus. He has gone from growing up in Dubai to pursuing his undergraduate degree in Florida, where he’s no stranger to the heat. Here in NYC however, it’s a little different this time of year.

“So far I’m enjoying it. It’s the first time I’ve ever seen anything like this,” he said. “It’s not too cold just yet, but I hear it’s going to get worse.”

Two to three feet of snow is expected to fall by Tuesday night but he’s not getting too worried.

While it seems like the rest of New York is in a state of panic, Zakaria is looking on the bright side.

“Coming from a hot place to a cold place, I actually prefer this,” he said. “You can always put more clothes on, but there’s only so much you can remove when it’s too hot.”

It’s a good thing he likes to wear layers, as New Yorkers must bundle up in those heavy jackets and scarves this week. Governor Andrew Cuomo declared a state of emergency Monday afternoon, warning people to stay safe at home. The MTA also announced that all bus, commuter rail and subway services would be suspended at 11 p.m. Monday night.

NYU students received multiple emails, texts and notifications of closures and cancelled classes and Zakaria is excited to get to fully experience the snow in the city.

While New York residents are preparing for the storm by stocking up on food, water and supplies, Zakaria feels like he’s ready. He said he’s stocked up and has snow boots at hand, but since he hasn’t seen it that bad yet, he isn’t too sure what to expect.

Lines at grocery stores have been incredibly long, as seen throughout social media, and shelves are emptying, all to get ready for the blizzard that’s been named Juno.

For Zakaria, he’s seeing more good than bad so far and he’s just living in the moment.

“I can’t see how it would be horrible, but I guess we’ll see how this day goes,” he said. “I’m looking forward to building snowmen and snow angels though.”