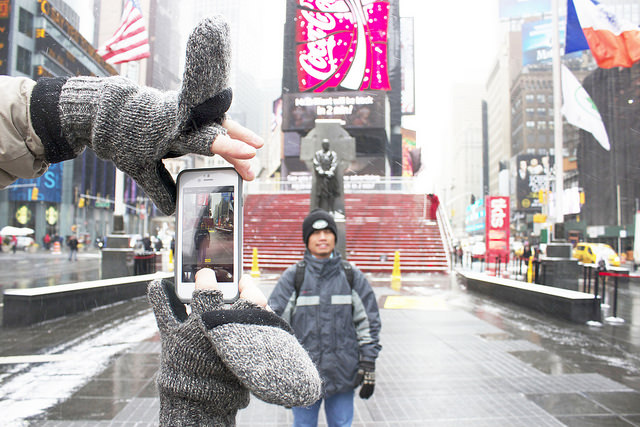 Roel Arriesgado of the Philippines stands for a photo in an empty Times Square. When storm Juno hits later today it will be his first experience with snow. Photo credit: Megan Jamerson

Roel Arriesgado of the Philippines stands for a photo in an empty Times Square. When Winter Storm Juno hits later today it will be his first experience with snow. Photo credit: Megan Jamerson

As temperatures dropped to 25 degrees late Monday morning and the snow began to accumulate on the sidewalks and neon lights, only the brave stood snapping selfies in Times Square. It was a race against incoming blizzard conditions from winter storm Juno.

According to Times Square Alliance statistics, Duffy Square the northeast corner between 46th and 47th street, had over 107,000 visitors this time last year. Today, there were only a sprinkling of tourists and ticket sellers and not one costumed character.

“We are trying to make the most of the last hours of our trip,” said Thomas Hewes of Oxford, England.

Hewes is on his last day of a week long vacation with his girlfriend. He anticipates their flight home will get cancelled later today, so they decided to venture out for a little more sight seeing. He said he is a little skeptical of what he called dramatic news reports and laughed at the storm nickname Icezilla.

“American’s have a way of exaggerating the weather” said Hewes, 26.

On the other side of the square, Stephen Velasquez of Washington Heights stood bundled with a clipboard greeting the slim number of pedestrians walking by. He is a ticket promoter, selling day of tickets for tonight’s Broadway shows. He says the winter weather advisory hasn’t slowed purchases just yet.

“Mondays are typically slow in general, and while the weather doesn’t help much, it’s mild right now,” said Velasquez.

Velasquez, 25, is a veteran of harsh weather conditions. He experienced last year’s record breaking winter and says he is prepared for what ever may come later today. 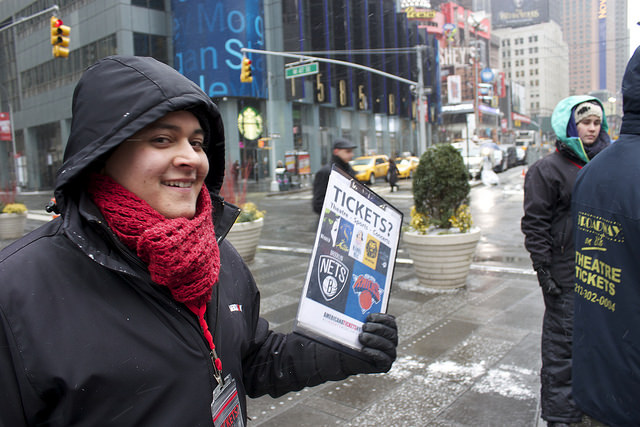 “I’m ready for it,” said Velasquez. “I’m wearing new boots, I already did my groceries and have water at home. Hopefully I won’t have to work tomorrow because it may be a ghost town”.

When he gets word that the subways are shutting down, he said he will call it a day so he can make it home safely.

Not everyone at Times Square was as experienced with winter weather. Roel Arriesgado, 36, stood with a large grin and three warm layers as his picture was taken.

“This is my first experience with snow ever and I love it,” said Arriesgado of the Philippines. “I’m amazed and very happy and chilled inside and out”.

Arriesgado, had been sightseeing since early morning. In attempt to see everything on his list before the storm hit he got an early start. He had already seen Rockefeller Center, St. Patrick’s Cathedral and the 9/11 Memorial was next on his list. He said he wasn’t disappointed with the storm forecast, it was exciting instead.