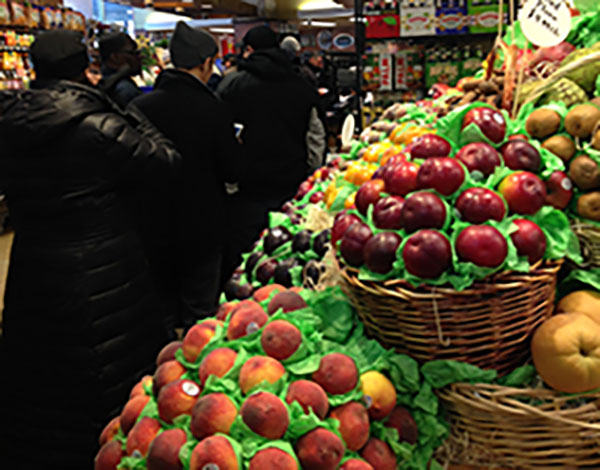 One line of shoppers stocking up for the snowstorm at the NYC Fresh Market in Brooklyn today. (Photo by Stacey Kilpatrick)

On a day when the wind was blistering and powerful enough to physically push your body along snow-covered sidewalks and herds of New Yorkers were out stocking up on last-minute groceries, Sarah Berman wasn’t panicking.

Berman, 36, a resident of Fort Greene in Brooklyn, was casually reading the ingredients on a box of pasta at the NYC Fresh Market on the corner of Gold Street and Myrtle Avenue in Downtown Brooklyn just after noon today.

She said she was planning a dinner party for this evening and needed last-minute ingredients for a hearty lasagna.

“I actually really hate this store,” Berman said. “It feels like a death trap and everything is about to fall in on you. But the other store that I went to [Red Apple] didn’t have two of my key dinner ingredients for the evening and I didn’t want to make two stops so I just came back over here for a quick shopping trip.”

With a few items in her cart, she said she was surprised at how few people were shopping in Fresh Market. The first grocery store that she went to in Brooklyn didn’t have any lines; while NYC Fresh Market had six registers open with one line.

The small, underground food store was semi-crowded as people walked between thin aisles and hovered around the deli, bakery and produce sections, reading food labels and questioning whether a gallon of Elmhurst Dairy milk for $4.79 was worth it. The store wasn’t overcrowded, with roughly 30 shoppers, but it was evident that people were stocking their cabinets.

Readying for her dinner to go on as planned, Berman said she doesn’t usually stress about snowstorms and wasn’t worried about the so-called paralyzing storm that has been predicted to dump up to two feet of snow on the city through Tuesday evening.

“It’s colder than I thought it was going to be so my ears were a little chilly, but yeah I’m really not that worried about it,” she said. “I’m guessing we’re going to get about 14 inches in this neighborhood. If you don’t have to get behind the wheel of a car and the subways are running, you’ll be surprised [at] how alive and active this city remains even under the worst possible circumstances.”

She said the media tends to blow up weather issues.

“And you know jokes on me if I end up with no water, but I really just don’t think that that’s going to be an issue,” Berman said.