Broadway reopens after 18 months of silence 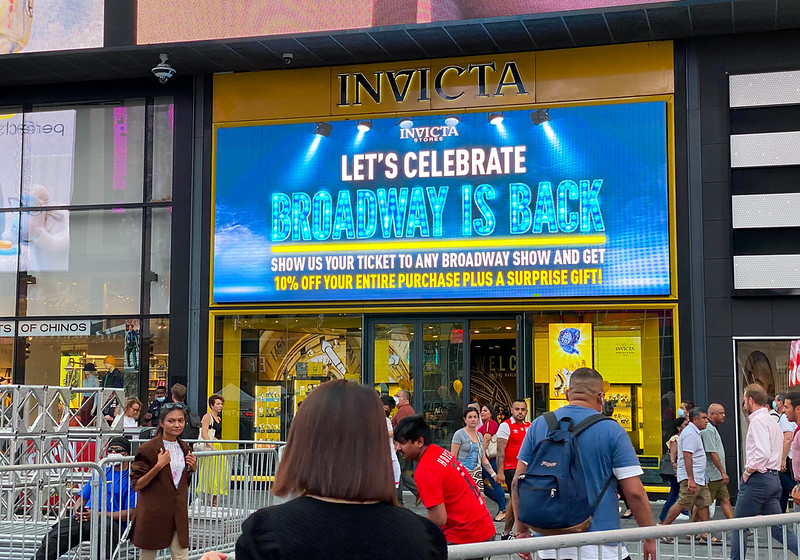 A billboard in Times Square announcing the return of Broadway. Broadway has 41 theaters that attracted 14.6 million people and $1.8 billion on ticket sales in 2019. They have not been open since March 2020. Photo by Michelle Ng-Reyes

After the longest shutdown in history, the closed curtains are being opened and the lights are back on. Broadway officially reopened yesterday and welcomed its tourists, locals, actors  and workers back to its theaters.

People are slowly returning to its seats as the industry cautiously opens its doors back to the public. Proof of vaccination is required, intermissions are gone, shows that were well over three hours have been condensed to 90 minutes, and there will be no autographs at the stage door.

In Times Square, ticket booths and vendors like TKTS, a part of the Theater Development Fund, also reopened and were selling same-day discounted tickets. While the lines were much shorter than they were pre-Covid, theater goers were still approaching vendors to ask questions about the day’s shows and see if last minute tickets to The Lion King were still available.

“That first feeling of, oh wow I’m back in a theater right now, that’s what I’m looking forward to,” Queens resident Jose Moreno said, looking up at a list of show times on an electrical billboard in Times Square. “I don’t know what we’re going to see tonight yet, but it’s exciting no matter what.”

While Broadway’s most popular shows were the first to return, the packed crowds that are usually seen outside the theaters were reduced to far shorter lines. Despite this, excitement still runs high for the in-person return of the industry.

“If I could be in the theater alone, I would be,” Moreno said. “The sounds, the smells… It’s a whole immersive experience that you can’t get from just watching the TV.”

Employees are also returning to their original jobs in Broadway’s 41 theaters and other locations as stage hands, actors, crew members, ticket vendors, ushers, and many other of the necessary jobs that help Broadway create its magic every day. And for many of these employees, they have been unemployed for all 18 months of the shut down.

“During the hiatus, I was mostly just on unemployment,” TKTS employee Mark Curry said. “I was doing creative work, but I wasn’t doing paid work. It was a hard time for creatives in New York in general, especially theater creatives.”

TKTS, a discount ticket booth in Times Square, is one of many companies that were affected by the Broadway closures: without any shows happening, many ticket vendors and freelancers were out of work.

“I have been unemployed this whole time,” freelance vendor and actor Andrew Spieker said. “I went back to Nebraska for five months, that’s where I’m from. And I was a 40-year-old man living in his parents’ basement for a while, that’s not great.”

Although Broadway has reopened, the crowds they are used to in past years are not expected to come back in full force. But, Curry is hopeful that audiences will come back in the numbers they once did soon.

“Hopefully people will just continue to support theater, and support creative people,” Curry said. “Supporting the people is the most important part, whether you’re an audience member, actor, writer or other creative producer, it’s valuable to recognize that there are vulnerable people who need our support.”