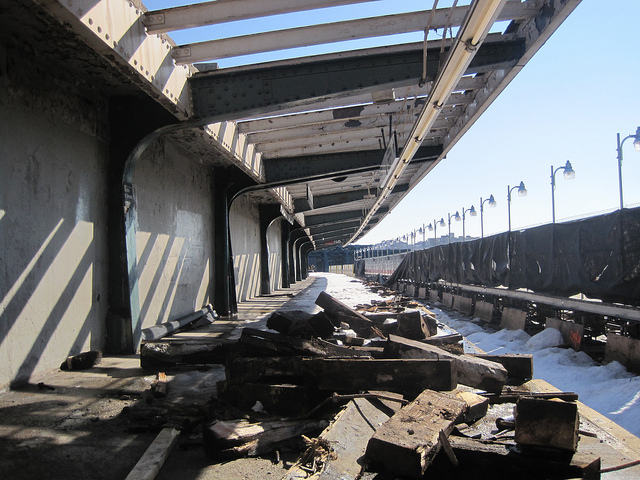 Construction debris litters a closed platform at the Smith-9th Street subway station in the Gowanus section of Brooklyn. (Photo by Nick DeSantis)

Since mid-January, the morning commute at the Church Avenue station in Kensington, Brooklyn has resembled something like an Olympic event.

Commuters disembarking from southbound trains sprint up the stairs, hurdle the concrete mezzanine, and fling themselves down the opposite side in a breathless attempt to catch a departing northbound train without spilling a drop of coffee.

This athletic maneuver isn’t a normal subway transfer. A new construction project is forcing some riders to backtrack into Brooklyn, delaying their daily commute.

Thanks to the recent launch of the MTA’s $275.5 million Culver Viaduct rehabilitation, straphangers from the Fort Hamilton Parkway and 15th Street-Prospect Park stations in Brooklyn have been deprived of northbound train service until May. Riders near those stations now have two choices: they can ride backward two stops to access northbound service at Church Avenue, or walk an extra half-mile in the cold to Park Slope’s busy 7th Avenue station.

Damon Sager, 36, of Park Slope, was so annoyed by the prospect of a convoluted commute that he opted out of the daily race. He asked to work from home instead.

“I have not bought a monthly metro pass, and I won’t until the end of this,” Sager said while waiting for a southbound train at 15th Street-Prospect Park. “So they’re losing money from this customer.”

When Sager does commute, he rides a southbound train backward two stops before crossing over at Church Avenue and heading north. The new transfer adds approximately a half hour to his routine, he said.

Despite the inconvenience for riders like Sager, the structural overhaul of the 77-year old steel and concrete viaduct, a bridge which lifts trains over the Gowanus Canal, is badly needed. Poor drainage deteriorated its shell, causing it to shed chunks of concrete.

As a stopgap measure, the MTA wrapped the undercarriage in black netting to catch falling debris. The city closed a playground underneath the bridge to protect children.

At the top of the viaduct, riders were often left scrambling for cover from the weather on the Smith-9th Street platform.

“When it rained, the holes in the ceiling would leave everyone exposed to the elements,” said Cozbi Cabrera, who owns a shop on Court Street, a block from the station.

Half-measures proved insufficient to plug the leaks, so the MTA began the full-scale repairs that cause the daily race at Church Avenue.

Gene Russianoff, a spokesman for the Straphangers Campaign, a transit riders advocacy group, said the crumbling viaduct is part of a huge backlog of improvement projects. He noted that since 1982, the agency has spent $55 billion to repair subways and buses, but many current repairs are part of a “triage system.”

“If they could have found another way to make the repairs, they would have,” he said. “It’s a sincere attempt to inconvenience passengers as little as possible.”

Sincere attempt or not, many subway users in Park Slope and Windsor Terrace are now faced with the annoyance of a prolonged – and unpredictable – trip to work.

David Galarza, a Windsor Terrace resident, knows better than most how precarious his commute is. On Feb.4 , signal problems at the Bergen Street station knocked out F service between Church Avenue and 2nd Avenue on Manhattan’s Lower East Side. With all of his nearby stations out of service, Galarza couldn’t even backtrack to get to work, and was forced out of the subway entirely.

“People were pretty much left to their own devices,” he said.

The nuisance will persist well after the first phase of repairs is complete. In May, Smith-9th will close entirely, and next fall, the service changes in Windsor Terrace will reverse, creating delays in the evening.

Craig Hammerman, District Manager for Community Board 6, maintained that the lengthy project is worth the delay, since most commuters will benefit in the long run.

“What we’re getting now is much more comprehensive than what we would have gotten had the MTA just continued to make surface changes,” he said. 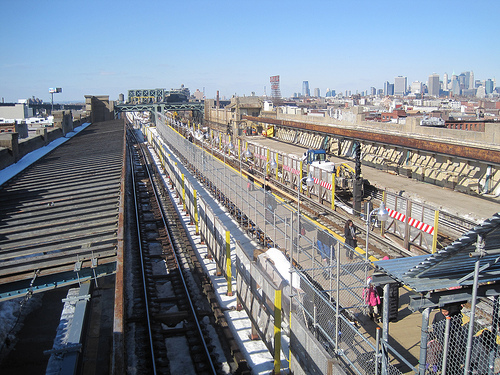 Subway riders wait for trains on a temporary platform at the 4th Avenue-9th Street subway station in the Park Slope section of Brooklyn. The station is one of two on the Culver Viaduct, a steel and concrete bridge currently under repair by the MTA. (Photo by Nick DeSantis).

Galarza appreciates those efforts and has adjusted to his new routine. But like many of his neighbors, the icy first few weeks of the project have proven unkind.

“I’m glad that they’re making these changes, but I just wish that some of the changes had taken place in weather that’s a little friendlier,” he said.

Reporter Nick DeSantis talks to Joseph Touraty, the owner/manager of a pizzeria across the street from the Smith-9th Street station in Gowanus.

[…] my newest Pavement story, I traveled to Windsor Terrace and Park Slope to speak with commuters about the fallout from the start of the […]