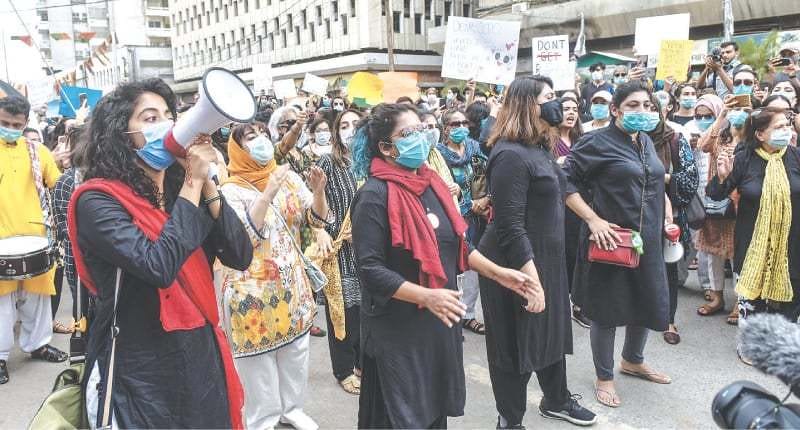 Last week, a woman while traveling with her two children on the Lahore-Sialkot motorway in Pakistan was reported to have been gang-raped as her car broke down in the middle of the night. The  prime suspect identified after the incident is still at large, reported Geo TV, one of the top news outlets in Pakistan.

The event ignited a lot of rage and fury on social media. Last weekend, scores of women took to the streets countrywide, protesting the incident, organized by the Aurat March, a movement working for women rights with annual public demonstrations. 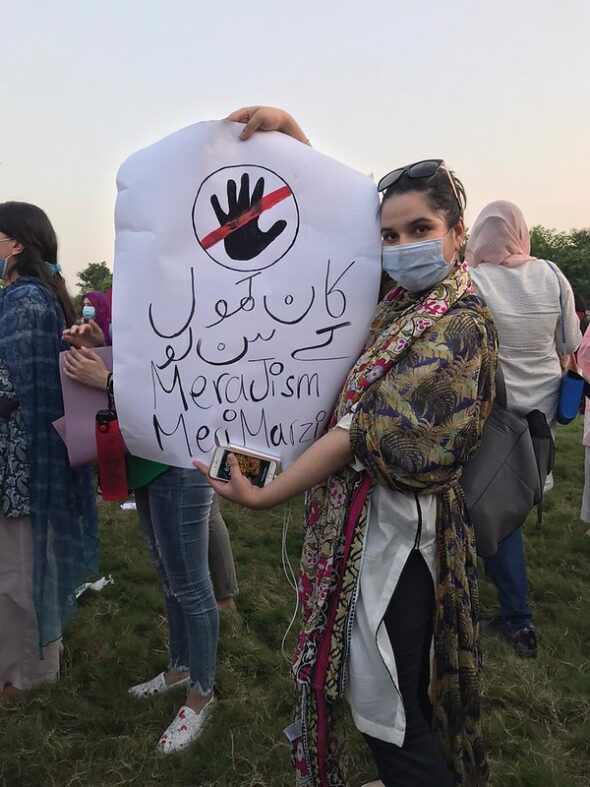 Iman Najeeb protesting outside the Parliament House in Islamabad. The placard reads ‘Listen to me carefully: My body, my choice,’ Sept. 12, 2020. Photo by Ahmed Rathore

Most women who came out to show their strength in numbers and register dissent felt this was a pivotal point in the sexual politics space. The present government has failed to provide protection to women, which has also been a source of contention.

“The gang rape incident in 2012 in India sparked a lot of fury on the national level,” said Safa Imran, 20, a student at the Lahore University of Management Sciences. She was an active participant at the protests in Lahore. “The tipping point was the statement of the Capital City Police Officer (CCPO) Lahore, blaming the victim as usual, and we knew it was essential to show our anger and demand our rights.”

Zahra Hajyani, 31, from Karachi attended the protests knowing that almost all women around her had experienced some kind of sexual assault. She also shared her traumatizing stories of molestation from her childhood.

“When I was in the third grade, a friend’s uncle gave me a few of those old brown one rupee notes and then asked me to accompany him to his house,” she said as she started narrating her story. “This was very common since we’d get money from our elders all the time, so I went with him. Later, he made me sit on his lap and before I knew it, his hands were in my panties. It was gross, and disgusting.”

This is not the only emotionally scarring incident Hajyani shared. She opened up about another experience that she 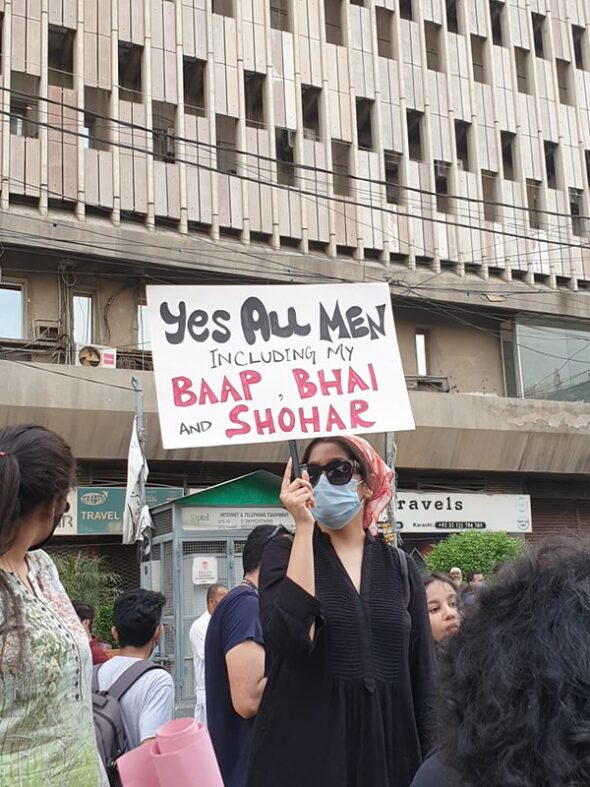 A placard at the protests in Karachi reading ‘Yes All Men, including my father, brother, and husband,’ Sept. 12, 2020. Photo by Zahra Hajyani

had in the shared bathroom at her school during summers one year, when construction work was taking place there. She was fortunate to be able to escape the situation and tried to take action, but nothing concrete came out of it.

“I cried eight times during the two-hour protest,” said Iman Najeeb, 23, who was protesting along with other proponents of women rights activists in Islamabad, outside the Parliament House. “At Aurat Marches, the energy is very different. We are excited, celebrating our femininity. But this was the first time it was sad. The men and the women, the elderly, and the children stood there raising their voice. Every woman there had a story that she was hiding.”

Several placards at the protest resonated with the attendees. “Yes all men” is the one particularly controversial as it stood out. It triggered Najeeb’s male friends when she shared the photo on her Instagram.

“Such posts end up getting a lot of hate and result in rape threats sent to the poster,” she said. “But we are lucky to be living in the age of social media where we are able to share these moments and messages with our friends and allies who are unfortunate and unable to make it to the protests otherwise. Even for our friends overseas, such posts are enlightening.”

There is a lot of polarization on social media about the possible solutions to this issue. Many advocate for hanging rapists publicly to serve justice but the discourse in feminist circles and civil society believe capital punishment is not the answer to this heinous crime.

“Zainab’s rapist and murderer was also hanged, but it didn’t really help control the situation, did it?” asked Hajyani.

Imran also said that capital punishment is not a solution.

“I don’t think that institutionalizing capital punishment is a good idea, mainly because I do not trust the state to execute it responsibly,” she said. “It also minimizes the chances of the survival of the victim in most cases.”

Imran said that sex and consent education can be the best solution. She believes that the idea of sex education is distorted in the society and there’s also a stigma attached to it of being a western concept. If localized, it can help bring about a change at the grassroots level.