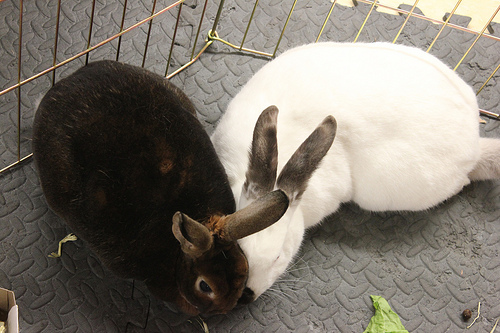 Winifred’s anxieties were clearly on display—trembling, heart-racing, scanning the room for the nearest emergency exit—she exhibited the symptoms that any single person would tell you are emblematic of the stressful (and sometimes traumatic) experience we like to call “the first date.”

Not only is it Winifred’s first date, but it’s her first time speed dating. And while her experience might not be unique in this regard, she is definitely not your typical bachelorette.

See, Winifred also happens to be a rabbit.

Izzy Johnston, a 26-year-old resident of the East Village, brought Winifred into the Union Square Petco on a Sunday to do what is called a “bond-and-pair,” a match-making session where owners attempt to find their pet rabbit a long-term companion by having their furry friend go through a series of mini-dates with other adoptable rabbits.

This is bunny speed-dating.

Organizations such as Rabbit Rescue and Rehab, the New York City chapter of the House Rabbit Society, provide these bunny speed-dating services as part of their efforts to encourage house rabbit adoption.

Johnston said she adopted her 6-year-old, chocolate-colored Rex about four years ago from the Long Island Rabbit Rescue.

“She was abandoned and someone had turned her cage over so she couldn’t even escape,” said Johnson, explaining how this experience made Winifred “uneasy” every time she moved into a new home.

“Now that she’s calmed down, I figured she could use a friend,” she said.

Cindy Stutts, licensed educator and founding board member of Rabbit Rescue and Rehab, said that these pairing sessions have always been part of what the organization offers to people as part of bunny education.

“Rabbits are inherently very social creatures, so we highly recommend that you get your bunny a partner bunny,” she said. “The reason we do it is rabbits are highly territorial. They’re so much more difficult to get along with one another than dogs and cats are.”

According to the House Rabbit Society website, bunny bonding is primarily for companionship rather than romantic or reproduction purposes. While male-female matches are common, temperament is the main factor in matching. Same-sex companions and unusual size combinations aren’t uncommon.

“It’s like a BFF more than a romantic thing,” said Johnston.

Despite being platonic in nature, the rabbit dating experience exhibits an uncanny resemblance to the real thing.

The rabbits are introduced in a small, neutral space. Much like a local café, the 6-foot diameter pen serves as a safe territory, therefore giving the prospective mates the opportunity to (literally) sniff each other out.

The couple cautiously smelled one another for a few minutes, but when Bobby attempted to force himself under Winifred and get her to groom him, and possibly do a little more, she wasn’t having it.

Wielding one of her own shoes as a makeshift protective glove, Marcie Frishberg, Rabbit Rescue and Rehab volunteer and bunny matchmaker (referee), promptly separated the two before any major throw-down ensued. Fortunately for people, disinterested dates don’t bite, claw and yank out chunks of hair as rabbits do (unless you happen to find yourself on a modern reality show—where taking shoes off isn’t particularly uncommon).

“It’s the hormones talking,” she said, noticing that the recently neutered Bobby was still slightly excited. “Like a teenage boy and [Winifred’s] not having that.”

“That’s my girl,” joked Johnston. “She’s doesn’t give it up on the first date.”

Frishberg explained the rabbits must be spayed and neutered at least four weeks prior to doing the pairing sessions and that Bobby’s neutering was still too recent.

A few poop pellets and the small chunk of Winifred’s fur remain on the ground after the first failed date, though Frishberg said it takes a number of dates before two bunnies show promise.

“You need a variety of rabbits with different personalities and different sizes,” she said.

Winifred was then introduced to bachelor number two, Mario, an 8-month-old Californian breed. Though the two initially approached each other with the same level of trepidation, the two hit it off and ended up mutually grooming, a sign of affection rarely seen on the first encounter.

Mario and Winifred’s date lasted a few more minutes, before Frishberg separated the two, explaining that their interactions can’t go too fast, too soon.

“Every date has to end on a good note,” she said.

Once a successful date takes place, the owner returns for another session with the same rabbit to make sure that the connection is real before deciding to adopt the bunny and take it home.

Cindy Stutts, who also does bunny speed-dating by appointment on Saturdays and Sundays at the Lexington Avenue Petco, has been doing the sessions for over 15 years and said that seldom do the adopted bunnies get returned.

“Maybe one out of 20 or 30 bunnies get returned to us,” she said. “And when they do it’s usually because the owners are impatient or don’t follow through with the process.”

It takes weeks and possibly months before the two bunnies make a full-fledged commitment, but Frishberg, who is indeed a bunny owner herself, said that once they are bonded taking care of them together, feeding and playing with them at the same time is just as easy.

“Sometimes they’ll have respiratory problems and their companion will clean their eyes or nose and groom them,” she said.

Laying side-by-side, cold noses pursed up against one another and their bodies forming a heart-shape in an almost surreal, mushy style, Winifred and Mario seemed like a true match made in bunny heaven. But it will take a series of more mini-dates before it’s decided that Mario is ready to take home.

“It’s the same thing like when you meet someone. You go on a first date it’s great but it’s not like you’re going to marry them,” said Johnston. “She needs a couple of dates before we decide to settle her down.”

[…] only is it Winifred’s first date, but it’s her first time speed dating. And while her experience might not be unique in this regard, she is definitely not your typical […]