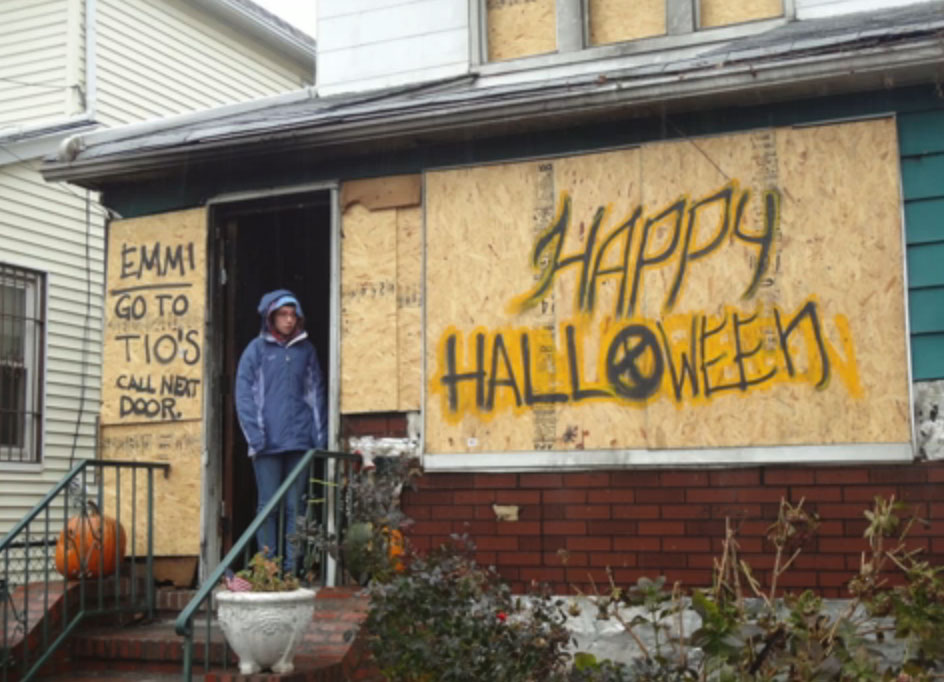 Margaret Mulligan was at home when the fires started.

“I looked out in front, and saw a downed wire on a tree—burning the tree—it crawled and starting to burn leaves on the ground,” said Mulligan, 22. Her mother, Margarita Sabogal, warned her to get away from the windows and call the police.

Mulligan dialed 911, but was unable to get through for 15 minutes. It was Oct. 29, and Hurricane Sandy had descended upon New York City. The 911 dispatch system was flooded with calls, causing delays.

The fire department was called to Hillside Avenue and 186 Street in Hollis, Queens for a report of wires down at approximately 9 p.m., according to the FDNY press office. A team of firefighters responded, roped off the area and notified the utility company. They cleared the area at 9:25 p.m., less than 20 minutes before another team of firefighters would be called to the scene.

She noticed smoke coming from the basement just as the firefighters left. She ran downstairs and saw a small fire, which she quickly put out with an extinguisher.

Mulligan was attempting to help her mother when she heard two explosions on the side of the house.

“There was a loud sound, and it would buzz through the whole house,” she said. “The buzzing just got worse and worse.”

“I came upstairs and saw all that smoke,” said Sabogal. “You see the smoke and then you know you have to get out.”

Sabogal and her daughter rushed to grab any nearby valuables and round up their pets. The family had taken in rescue animals for many years and at the time of the storm was housing two dogs and seven cats. Only the two dogs and three cats made it out.

“It was terrible,” she said. “She was not sane at all. She was crying, freaking out about the cats and kept going back into the house.”

Smoke and fire were visible by the time the second team of firefighters arrived at 9:49 p.m., according to the FDNY fire incident report.

The fire started with a downed power line coming into contact with the left side of Sabogal’s home and spread to the second floor and attic, according to the report. It escalated to a second alarm and was brought under control at 10:51 p.m.

But the house, while still standing, was burned beyond repair.

“Throughout the whole thing, you really don’t think that the house is going to burn,” said Sabogal.

The Sabogal family is one of many displaced in the wake of Hurricane Sandy. Current estimates list the number of housing units damaged or destroyed in New York state at 305,000, that number is expected to grow, according to a state damage assessment briefing held by Governor Cuomo on Nov. 26

Just in Breezy Point, Queens, an estimated 111 housesburned down in a six alarm firethat took nearly 12 hours to put out.

Over a month after the storm, many families still lack a permanent place to live. For the Sabogals, losing their home was only the beginning.

“It’s going to be a long process,” said Sabogal. “The burning of the house, you think it’s bad? It’s bad afterwards. All these steps you have to do.”

Mother and daughter packed what little belongings they had and turned to Sabogal’s older brother, Gonzalo Sabogal, Jr., 53, for a place to stay. But Sabogal and Mulligan were not the only residents of their household. Sabogal’s parents, Emma and Gonzalo Sabogal, own the property and live on the first floor of the house. They emigrated from Bogota, Colombia to New York in 1967, and had lived in the house in Hollis ever since.

Sabogal’s parents were on a religious vacation that toured Rome, Turkey and Jerusalem when the storm hit. They did not have access to cell phones or email at the time and the storm’s impact delayed and rerouted their flight.

“There was no way to tell them what had happened,” she said. When the house was boarded up, Mulligan decided to reach out to them the only way she could.

On the front of a wooden panel she spray-painted a note to her grandmother, “EMMI, GO TO TIO’S CALL NEXT DOOR.”

While neighborhoods were evacuated and suffered tremendous damage, Mulligan said the most frightening part of the storm was the feeling that no one was safe.

“People died because of trees falling through their house,” she said. “You can’t even be safe inside your house. And if your tree didn’t fall this time, it might have gotten loose could fall next time.”

“We never had storms here like this until now, within the last ten years,” added Sabogal. “When I was growing up, we never had these storms year after year butchering everything.”

Mulligan said she was critical of the city’s maintenance of certain neighborhoods. In Manhattan, where the power grid is underground, residents had their electricity back relatively quickly. But neighborhoods in the outer boroughs, where power lines are kept above ground, were susceptible to fires and prolonged electrical damage, she said.

“I think it’s really awful that the city doesn’t update the system,” she said. “I don’t know when they plan on doing it or how many lives have to be affected for something to change.”

Sabogal said the storm, and the feeling of helplessness it brought, has robbed many survivors of their independence.

“Rebuilding is really hard, it takes years for you to get settled in your life,” said Sabogal. “And then it goes away in one night.”

“I’ve been trying to think of it, like how forests have to burn to start over, so maybe this is a new beginning,” said Mulligan. “But you walk into that house it just feels like everything is dead. Like the house died.”

The two return to their old home everyday, in an ongoing attempt to rescue any belongings from the debris. Sabogal’s remaining pets lived in the garage for nearly a month, after her sister-in-law’s allergies made keeping them at her brother’s house an issue between the families. Twice a day she visited the garage to feed them and keep them company.

They recovered the bodies of the four cats that were unable to escape and held a burial for them in the backyard.

“I do anything not to think about it,” she said. “They were all so sweet.”

Sabogal has not returned to her job at Intermediate School 61 in Corona, Queens where she is an eighth grade Spanish teacher. Instead, she meets with contractors and insurance personnel to discuss her future. The Department of Education has been accommodating to her situation, she said.

Her insurance company, Allstate, has yet to notify her how much she will receive to rebuild her parent’s property from scratch. In the meantime, the company has found them a temporary living space in Little Neck, Queens. The company pays six months rent secured, and then on a month-by-month basis until her house is rebuilt.

Mulligan, a senior graphic design student at Queens College, has returned to her classes. But helping her mother has kept her from turning in her assignments. Her professors have granted her extensions, she said.

The family now lives in a house where the furniture, pots and pans, and even plates are rented. But Sabogal is grateful to be reunited with her family and pets under the same roof.

“Just having your own space, the best was just sleeping the first night on your bed, being able to get up the next day and make yourself a pot of coffee,” she said. “We really take our beds for granted.”

She added that she was relived for her pets to be in a house again and that the dogs and cats were much happier.

Mulligan also said it was the little things that made her feel better.

“You don’t have stuff, stupid things like your clothes or things you need to buy to feel somewhat put together,” she said. “I bought clothes and makeup just to feel like a person.”

She and Sabogal look forward to adopting a daily routine again. Before her home burned, Sabogal’s fondest memories were coming home from work to find her parents cooking, everyone getting along together, she said.

“That’s all I want, just having that back,” she said.