A Broadway tap dancer and 52 socially distanced flash mob dancers wearing “Get Counted” t-shirts, put on a show in Times Square Wednesday to encourage people to fill out their 2020 census forms.

The choreographed performance, inspired by Chinese and African dance, was set to New York hits like Frank Sinatra, “New York, New York” and Alicia Keys’ “Empire State of Mind Part II.”  And with the census deadline less than a week away, they closed the performance shouting in unison, “Get Counted NYC, It’s Not Too Late”.

“I view this as a way to get the word out in a new and unique way, that at the same time demonstrates that we’re still here in New York and we still count in New York,” Meeta Anand, a Census 2020 Senior Fellow at the NY Immigration Coalition, said. She wore a mask that read “Get Connected”, designed to get passers-by to fill out census forms. “We are full of people, cultures and experiences to celebrate and we’re doing that today here.”

Melva Miller, the CEO of the Association for a Better New York, said the event was part of  an ongoing effort to get New Yorkers counted during the final stretch and highlight the importance of the census in a very non-traditional way.

“There are individuals who need more encouragement to fill out the census,” Miller said. “ We know where they are, we have the data. We know how we can target them and get them to actually complete the census form.” 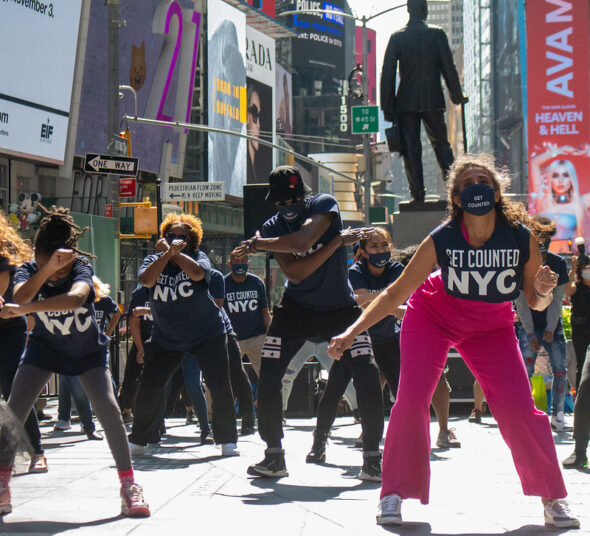 Dancers participate in a flash mob in Times Square to raise awareness for the Census 2020. Photo by Courtney Guarino

The group had set up tables alongside Duffy Square with local census takers ready to help people fill out their forms electronically.

COVID-19 has made it increasingly more difficult to spread awareness and education on the 2020 Census, specifically to those in historically undercounted communities. According to Miller, social distancing halted in-person outreach, like street fairs, block parties and houses of worship, which is how reaching these vulnerable communities is most effective.

Miller said some people just don’t understand the importance of the census. Others are immigrants who fear the information will be used against them. A part of their efforts are to demystify the misinformation to ensure all voices are counted and heard.

“It’s about explaining what exactly the census means to you from the moment you walk out your door to the moment you reach your destination,” she said.” 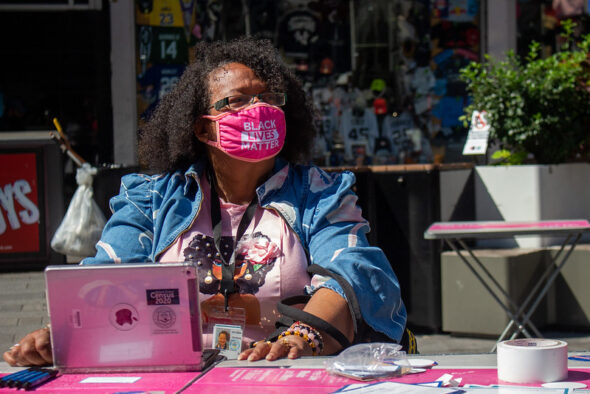 A census response representative stands by to help people fill out their 2020 census forms. Photo by Courtney Guarino

The dancers were both professional and just ordinary New Yorkers from across all five boroughs, made up of children and adults. They twirled ribbons, stomped and shook their hips and raised their hands in the air.

City Council candidate, Marcelle Lashley-Kabori, was one of the energetic dancers. She said that by not filling out the census, you become invisible.

“You might as well make sure you are represented the way that you want to be represented, if not, people will make a decision for you,” Lashley-Kabori said. “Being able to take the census allows you to say “no, here is how I’d like to be represented”, vs. someone just making assumptions about who you are and what you need.” 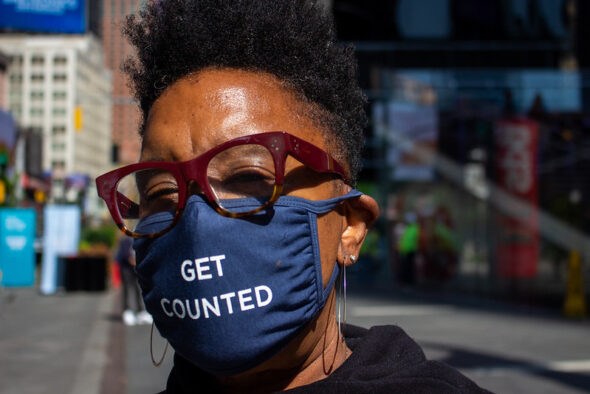 Dawn Kelly of the Nourish Spot was one of the sponsors of the event .Photo by Courtney Guarino.

Census data determines the allocation of trillions of dollars in federal funding to various programs within communities — affordable housing, Medicaid, roads, bridges, free lunches at school, even how to distribute the COVID-19 vaccine, and more critical services. Not to mention the amount of congressional representation.

Having less congressional seats in the house also means having less of an influence in the 2024 presidential election. Two seats lost, meaning two less votes for the New York electoral college.

“If you care who our president is and how much we have a say in that, it’s just another indication on how important the census is,” Anand said.

Thank you for including me & the name of my Jamaica, Queens based black owned business , The Nourish Spot, in your Census flash mob story .NYC desperately needs all of residents to be counted. We show up and participate because small businesses need communities to thrive as well. We are also hoping that if you write any stories about supporting black owned businesses across NYC, I hope you’d keep us top of mind.