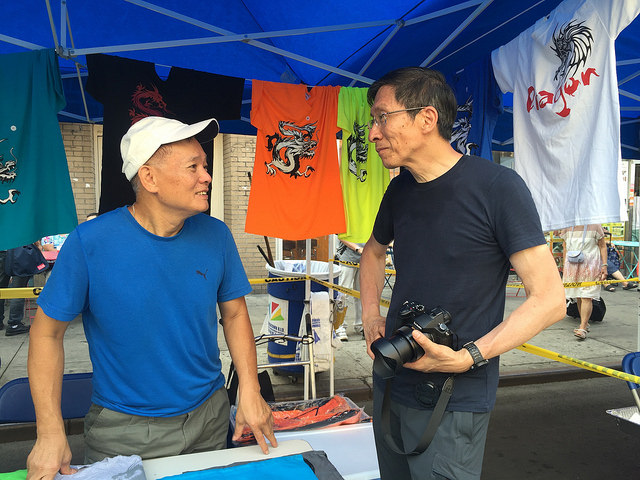 The eve of the 15th anniversary of 9/11 was a festive day in Chinatown.

Visitors and residents ate free Chinese food and watched traditional Chinese performances at the 3rd Mid-Autumn Moon Festival in Chinatown. Local Business owners showcased they work in booths. Even five years ago this activity would be unheard of in this immigrant neighborhood, just east of ground zero.

“It is a long journey to recover from what we have experienced over the past 15 years, but we are trying,” said Wellington Z. Chen, the executive director for Chinatown Partnership Local Development Corporation, who helped organize the festival

He said the festival was developed to raise public awareness about the business and culture within Chinatown.

Following the 9/11 attacks, Chinatown suffered an economic depression. Census data of 2012 indicated a 9% loss of population in and local businesses experienced a 50% – 70% loss in monthly revenue in the three-month after the attacks.

Today, 15 years later, Chinatown business leaders remembered what happened on that day and the impact it had on their livelihood.

“It was a tragedy,” said Hua Li, 60, the president of United Fujianese of American. His wife, who used to work in the 1 World Trade Center, is a 9/11 survivor.

“She should have been there working on the 93rd floor, but luckily, when the flight crashed into the building she was on the ground,” Li said. “Many of her colleagues and a close friend of ours passed away. It’s very hard for all of us to remember that day.”

Following the attacks, Chinatown was hit by martial law aimed at keeping neighbors safe, but the cost was steep for businesses.

Dust and smoke were in the air. No trucks were allowed on Canal Street, their major business corridor. Chinatown residents had to show identification to get into their neighborhood. Parking was taken over by law enforcement. Businesses could not get delivers and there were no customers in sight. People moved away, businesses shut down, tourist buses and tourists stopped going into the area. According to data from Chinatown Partnership website, by 2002, up to 100 garment factories closed, which resulted in the loss of 8000 jobs lost.

Life changed not only for Hua Li and Tea Fu Zi, but for many Chinatown residents. This led members in the community take proactive measures.

In 2006, Chen formed the Chinatown Partnership. His goal was to rebuild Chinatown into a business improvement district that brings residents, business owners, and community groups together to promote a special destination to live, work, and visit. They also want to preserve their neighborhood and culture.

“It needs a process,” Chen said. “Unlike other BIDs, we use our money directly to repair the environment that 9/11 left for us.”

In the last three years, the Chinatown Partnership has worked with the Chinatown Business Improvement District and the Clean Streets projects. They brought in guidepost, cultural lanterns decoration projects, and store rental projects.

Ten years later, there are more than 4,000 stores, markets and big malls in Chinatown. Every year the officers from Chinatown Partnership conduct market research to determine growth and needs of local businesses.

Jason Kwan, the vice president of A-image Company, sold his self-designed Chinese T-shirt at the festival. This is his third year participating.

“It is a good way to help others see the beauty of Chinese culture and history,” Kwan said.

Chen said this is only the beginning.

“After the 9/11 attacks, everything changed, but did not change indeed,” Chen said. Chinatown has more than 100 years history, it is our duty to protect it and pass it to our younger generation as what it was before the attacks.”

The Mothers and Daughters Fighting to Keep Chinatown Alive - TechiAzi says:
May 5, 2021 at 5:06 pm

The Mothers and Daughters Fighting to Keep Chinatown Alive - Autism Spa says:
May 5, 2021 at 5:16 pm

The Mothers and Daughters Fighting to Keep Chinatown Alive | NewsDeal says:
May 5, 2021 at 5:17 pm

[…] day, this historic neighborhood faces the gravest menace to its existence since September 11, when its economy was crippled and its garment-factory trade decimated. Chinatown was walloped by 2020’s one-two punch: First, […]

The Mothers and Daughters Fighting to Keep Chinatown Alive | LifeStyle Closet says:
May 6, 2021 at 1:27 am

The Mothers and Daughters Fighting to Keep Chinatown Alive – Style – ReadSector says:
May 6, 2021 at 8:38 pm